12 Moments That Defined The 4 Teams Left 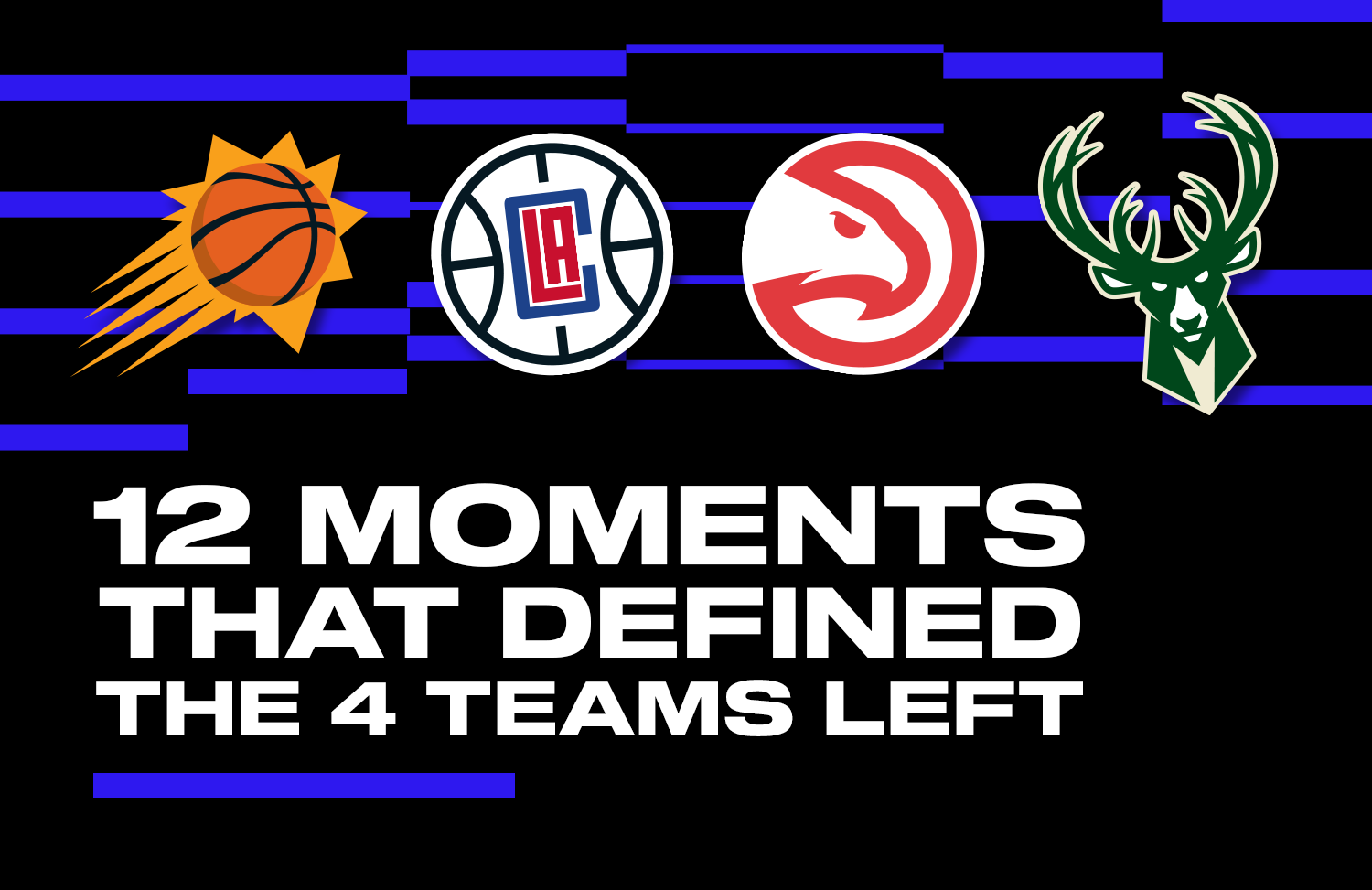 That’s how long it’s been since any of the four teams in the NBA Conference Finals made the NBA Finals. The Phoenix Suns last made it in ‘93, with Charles Barkley patrolling the paint. The Bucks? The Kareem (then Lew Alcindor) team of 1974. In Atlanta? They weren’t even in Atlanta when Bob Petit’s St. Louis Hawks made it in 1961. For the Clippers? A Finals berth would be the first in franchise history. And as they’ve each battled their way through one of the wildest NBA Playoffs ever, look back with us on 3 Moments from each that tell their story.

The Playoffs create Legends. In Trae’s case, the third-year rising superstar relished playing the role of villain. His iconic ‘shhh’ move after this play will live on in sizzle reels (and Knicks fans’ nightmares) for decades, after the one-man highlight wove through the Knicks defense, hit the floater and silenced all of MSG. Find the Moment in the Marketplace.

John Collins’ dunk over Embiid [Soon to be a Challenge Reward]

One of the statement plays of the postseason. Or any postseason. The Hawks came into their series against the Philadelphia 76ers as (big) underdogs. But over the course of a 7-game series, you saw big play after big play after big play -- and their swagger grow with each one of them. And in Game 6, Collins rose up to catch an alley-oop, threw it down over the 7-footer Joel Embiid and stopped the basketball world. The 76ers went on to win Game 6, but the Collins dunk lives on as one of the iconic Moments from a Hawks team that’s gone from a longshot at the start of the Playoffs (and a longshot to even make the Playoffs at one point) to the brink of the Finals. The dunk made for a mighty fine t-shirt as well.

Here, you see the handles from Bogi. What you don’t see is what’s happening with an Atlanta Hawks team that, until two weeks before this, was in trouble. ‘Worst record in the East’ kind of trouble. ‘Relieve the head coach of his coaching duties’ kind of trouble. Enter Nate McMillan, the journeyman NBA head coach who now famously combined an old-school NBA style with a free-flowing, new style that unlocked a floundering franchise full of stars. You started to see highlights almost every night from the Hawks -- a lot of them from Trae, sure. But the ball finds energy, as the saying goes, and a renewed energy in Atlanta carried the Hawks to a 27-11 record in the last 38 games of the regular season, with a free-flowing, creative style like you see  from Bogdanovic right here. Find the Moment in the Marketplace.

So much happen has happened during the NBA Playoffs -- especially these NBA Playoffs -- that it feels like this play happened two seasons ago. But when this poster hit Twitter, it was tough to imagine there’d be another to dislodge this as The Dunk Of The 2021 Postseason (let alone a couple of them, including another one from Kawhi!). Here, we see Kawhi doing everything Kawhi does -- showing why he’s one of the NBA’s best defenders on one end, and why he’s one of the best finishers on the other. Not always thought of for his work on the offensive end, Leonard’s one of the game’s toughest players to stop when he decides to take over -- and he was on the way to one of the greatest scoring postseasons in history before his injury last series. His absence has set the Clippers back, but this dunk set off a Playoff run that saw the Clippers reach their first-ever Conference Finals. Find the Moment in the Marketplace.

‍Next Mann up. With Kawhi injured, the Clippers turned to Terance Mann -- a wing who’d gotten just seven minutes of run to start the Jazz series, and one who got Twitter thinking of Field of Dreams when he started getting more playing time. But as the Clippers were reeling in the wake of Leonard’s injury, Mann started to explode. He posterized Defensive Player of the Year Rudy Gobert in Game 5, then came back in Game 6 and did the same thing again. But this Moment’s not just about the dunk. It’s about everything that happened around it. Mann went off in Game 6, taking over in a break-the-internet, 39-point, 15-of-21 shooting night that sent the Clippers to their first WCF and ended in one of the great Moments of the Playoffs. Find the Moment in the Marketplace.

‍In a season that’s seen the Clippers go further than any team in franchise history -- and coming off PG’s playoff career-high 41 points -- we finish with a third playoff moment for LA. When Kawhi went down, Paul George told coach Ty Lue to trust him: “Ty, I got us.” And he delivered. With the basketball world reeling after the Leonard injury news, ‘Playoff P’ put the team on his back, going for 37 points (including this stop-on-a-dime pullup J over the DPOY). Find the Moment in the Marketplace.

Khris Middleton, Game 7 Jumper [soon to be a Challenge Reward]

‍
Khris Middleton's been an IYKYK star for years in the NBA, quietly becoming one of the game's most efficient scorers -- while the fanfare's gone to his all-world MVP teammate. But in 2020-21, the soft-spoken Bucks wing has taken things to a whole new level. He added some flash to his game and became one of the NBA’s top clutch performers, including a game-winner in the First Round. And when the Bucks needed him most -- on the road in Game 7, coming off one of the biggest Playoff shots ever from KD -- Middleton delivered. And he hasn't slowed down in the Conference Finals.

Giannis can do things that almost no one in the history of basketball can do. But the Greek Freak's also got a motor unlike any other. As you can see here. The 2019-20 Defensive Player of the Year has big dunk after big dunk inside of NBA Top Shot, but when you look at why the Bucks have the best team defense in all of the postseason, look at last year’s MVP. Find the Moment in the Marketplace.

Spinning. And. Winning. Holiday had had a quiet night in Game 3 against the Nets, with Giannis and Middleton dueling Kevin Durant and James Harden. But after making just three of his first 13 shots, Holiday made one of the plays of the postseason. And it couldn’t have come at a better time. Through two games, the Nets had owned the series, going up 2-0 over the Bucks. And with 13 seconds left and the Bucks down 1, they faced a 3-0 series deficit -- something that no team had ever come back from in NBA Playoffs history. Until Holiday, one of the game’s most versatile players, came through in the clutch with this go-ahead bucket. Find the Moment in the Marketplace.

Chris Paul’s Behind the Back Dime

Seen the CP3 numbers yet? If not ... they’re incredible. Chris Paul’s got a loooooong history of joining a team and immediately lifting it to a whole new level. And here, we see why. Watch ‘The Point God’ draw the defense to him, and deliver a perfect behind the back bounce pass -- in rhythm -- for the dunk. The Suns were the buzz of the NBA last summer, when they went on a tear in the bubble. But the addition of CP in November made them a title contender, and now they’re just one win away from locking up a spot in the Finals. Find the Moment in the Marketplace.

Devin Booker With the Hammer

It’s a new one. But it’s a big one. As the Moment description says, “The days of sleeping on Devin Booker are over.” And in this one -- a 47-point, Playoffs career-high in scoring to eliminate the Lakers -- Booker made sure the whole world woke up to him. A few days ago, Rip Hamilton called Booker “the best shooting guard in the NBA,” and now DBook finds himself one win away from being able to make his case on the world’s biggest stage. Find the Moment in the Marketplace.

Seems simple. But this move is signature Deandre Ayton. So much of the love showered on the 2018 NBA Draft goes to the guys drafted two and four spots after Ayton (Luka Doncic & Trae Young, respectively). But the Bahamanian big man went #1 for a reason -- and here, we see the super-rare combination of quickness, athleticism and post presence for a 7-footer. The world’s waking up to Ayton -- especially after the #ValleyOop -- but the third-year center’s been putting opponents in the blender in the post all season long. Find the Moment in the Marketplace.