25 Years Of Legends: Here's Who's In WNBA Run It Back 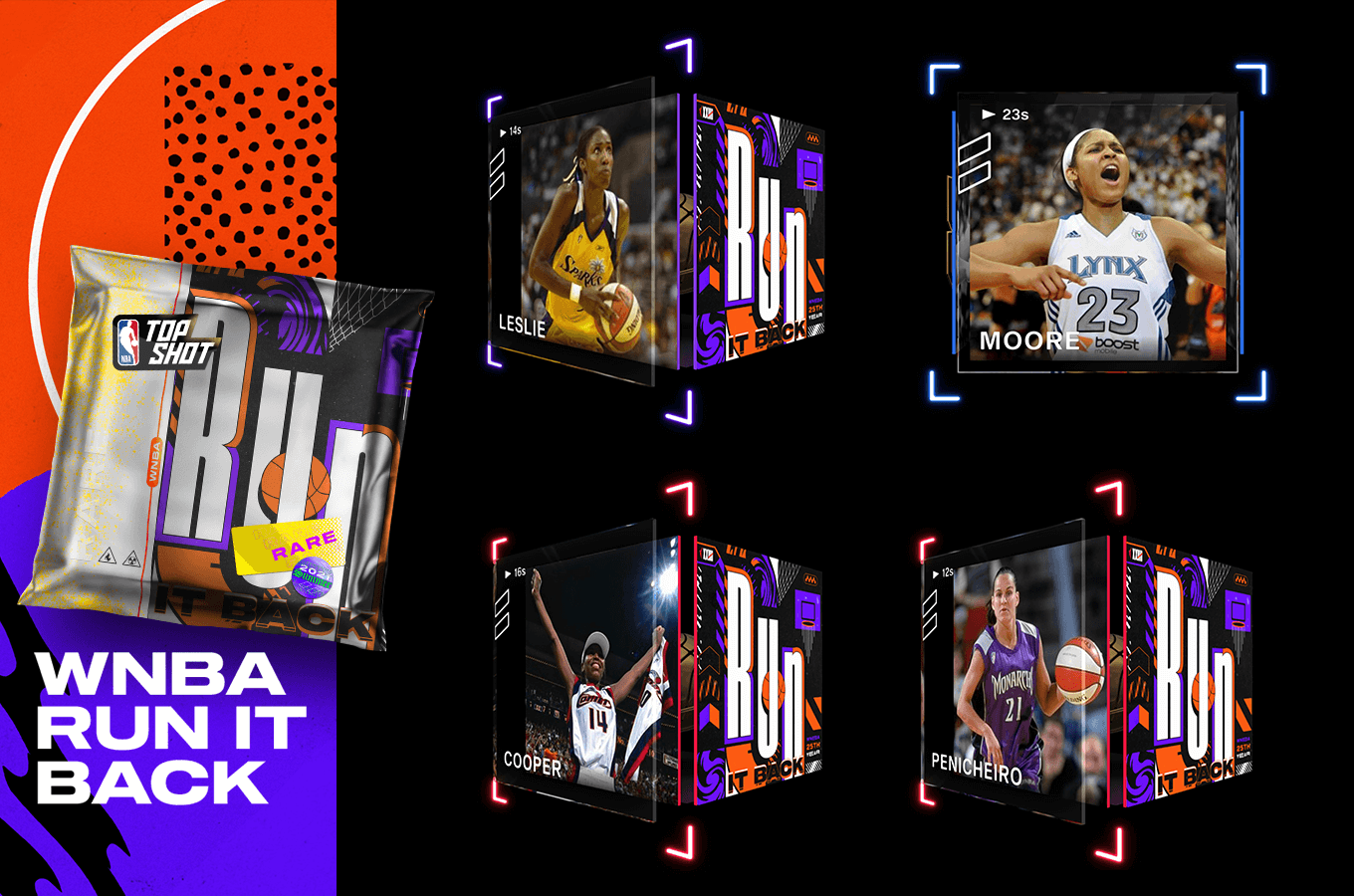 On Friday, 25 different Moments -- pulled from 25 different WNBA all-time legends, dating all the way back to 1999 -- will drop in the first-ever WNBA Rare Packs on Top Shot.

Here's who's on the way.

When a championship is on the line, you want Cynthia Cooper on your side. The Houston Comets guard buries a three over the Sparks in Game 3 of the WNBA finals. Cooper played all 40 minutes with 23 points, 12 assists, and 7 rebounds to bring Houston their third WNBA title in a row.

Ticha Penicheioro is a floor general. Penicheiro is 2nd in WNBA career assists of all-time with 2600 career assists. The Monarchs guard shows off her high basketball IQ, delivering a behind the back pass to her teammate for an easy bucket.

Yolanda Griffith puts a dagger in the hopes of the Sparks as she scores a go-ahead bucket to give the Monarchs the victory in a battle for the ages. The Hall of Famer and 1999 WNBA MVP finished with 23 points, 1 assist, and 5 rebounds.

And One! Tina Thompson drives to the hoop and gets the bucket despite being fouled. The Hall of Famer and two-time MVP is always a reliable bucket-getter. Thompson finished with 12 points, 1 assists and 6 rebounds.

Drive. Draw the foul. Count it. Swin Cash fiercely drives towards the hoop and scores an extremely tough basket while drawing the foul in her rookie season. The four-time All-Star finished the night with an impressive 24 points, 3 assists, and 14 rebounds against the Cleveland Rockers.

Lisa Leslie kept it calm, cool, and collected as she knew she was about to change basketball history forever. Coming off the dribble, Leslie soars and throws down the first dunk in WNBA history. The Sparks guard immediately throws her hands up in the air with exultation. This single dunk is just one of the many magnificent feats of Leslie’s career. The Hall of Famer and three-time WNBA MVP would end the night with 13 points, 4 assists, and 8 rebounds against the Miami Sol.

The #1 Overall pick in the 2009 WNBA Draft quickly displayed how she’ll be a force to be reckoned with in the WNBA for many years to come. Angel McCoughtry Eurosteps around the  Seattle Storm defenders before dropping in a clean layup. McCoughtry capped off the night with 16 points, 5 assists, and 3 rebounds.

In Game 3 of the 2009 Western Conference Finals, Phoenix Mercury guard Diana Taurasi gets a stylish bucket and draws the foul. The Mercury would go on to win the 2009 WNBA Championship and Taurasi earned league MVP honors. Taurasi concluded Game 3 with 21 points, 3 assists, and 7 rebounds.

Hall of Famer and seven-time All-Star, Katie Smith is no stranger at the three-point arch. Smith currently sits third all-time in WNBA 3-Pt Field Goals with 906. Smith pulls up from deep and buries the triple against the New York Liberty. Smith finalized the night with 16 points, 4 assists, and three rebounds.

Australian Forward Lauren Jackson quickly formed her legacy after being drafted first overall in 2001. Jackson would enter the league determined to showcase her dominant skill set. The Hall of Famer and three-time WNBA MVP is on the receiving end of a dime and blows past defenders for an easy layup. The Seattle Forward finished the night with 11 points, 1 assist, and 5 rebounds.

Becky Hammon sinks a circus shot with class. In the 2011 season opener against the Tulsa Shock, the six-time All-Star doesn’t just shoot it over her defender, but also the backboard as she falls out of bounds. Hammond would end the night with 18 points and 5 assists.

Tamika Catchings displays how she has mastered the art of the spin move by getting around the Connecticut Defender and gets the And One! The Hall of Famer, 2011 League MVP, and 10-time All-Star capped the night with 12 points, 1 assist, and 11 rebounds.

Maya Moore, the 2011 1st Overall pick, entered the league with class. This reverse layup in Game 1 of the WNBA finals is just one of many examples of the weapons she has in her basketball arsenal. Even as a rookie, Moore was an immense part in helping bring the Minnesota Lynx their first WNBA title. The 2014 MVP and six-time all-star would conclude Game 1 with 11 points, 2 assists, and 6 rebounds.

Three defenders? No problem. Seimone Augustus came to a crossroads with three Mercury defenders in her way but she did not back down. The eight-time All-Star and 2011 Finals MVP has little fear on the court and that’s a big factor in her being a four-time WNBA Champion. Augustus concluded the night against the Mercury with 21 points, 2 assists, and four rebounds.

The 2013 2nd overall pick knows how to make a good first impression. Elena Delle Donne called the game by putting a Mercury defender in the spin cycle and buried the game-winner. The two-time league MVP and six-time All-Star finalized the night with 18 points and 6 rebounds.

There’s high expectations that come with being the 1st overall pick. In her WNBA debut, Griner has no issue showing the basketball world that she’ll be a problem for any opponent by slamming and hanging on the rim immediately after. The eight-time All-Star capped her WNBA debut with 17 points, 1 assists, and 8 rebounds.

Candace Parker puts the Mercury defender on skates after an impressive pump fake. The two-time MVP and five-time All-Star displays why she's referred to as one of the greatest of all-time. Parker capped the night off with 16 points, 2 assists, and 4 rebounds.

‍
Cappie Pondexter storms towards the basket with confidence. Ponxdexter ignores the three Fever defenders and sinks a breathtaking reverse layup. The seven-time All-Star finished the night with 17 points and 5 rebounds.

The 6-time all-star and former MVP has been showing off her skills throughout her career. Ogwumike  shows her mastery of the up-and-under with this power play in 2013. Nneka finished with 9 points, 7 rebounds, 2 steals and a block in the Sparks win.

Drop step, tough. Charles has been a force in the paint for her entire career,. She is a player who needs to be double teamed every time she touches the ball. Charles was honored with a All-WNBA 2nd Team nod in her final year with Connecticut.

The spin for the space, the glass is your friend. With 21 points and 7 assists, it was just another night at the office for the all-time great point guard. The 2013 season was magical for Whalen and the Lynx, as they swept their way to a WNBA championship. Whalen was a constant force with the ball in her hands, being named First Team All WNBA and made 5 all-star games.

Breanna Stewart shows off her silky handles and finesse touch at the rim, on the opening night of the 2018 WNBA season. Stewart finished with 22 and 15 and it was the beginning of an all-time year for Stewart as she added the regular season MVP and WNBA Finals MVP to her championship ring with the Storm. Stewart has made 3 all-star games and is one of the best players in the league right now....and is just entering her prime.

Passing is a true art form, and Sue Bird exemplified being a creator. This sweet no-look pass was one of her 9 assists in a win against the Sun. The legendary point guard helped lead the Seattle Storm to the 2018 WNBA Championship, while also being honored as the recipient of the Kim Perrot Sportsmanship Award. With 12 all-star appearances under her belt, Bird is the gold-standard for WNBA players.

Fancy footwork! One of the greatest bigs to play the game, Sylvia Fowles has always found ways to assert her presence on either side of the ball. Catch her on the block in isolation, and you’re just going to get scored on. Fowles dropped 30 and 16, while going 13/15 from the field.

Teresa Weatherspoon, at the buzzer… it’s good!! Perhaps the most defining moment of her career, draining a half court shot to send the 1999 WNBA Finals to a decisive Game 3. "The Shot" will live on as one of the single most iconic Moments in the history of the WNBA -- and up there with one of the great ones in sports history.

The spin for the clean finish! Chamique Holdsclaw shows her athleticism and poise with this difficult move, showcasing 2 of her 22 points that evening. The #1 pick that year by the Washington Mystics, Holdsclaw proved immediately that she was going to be a force in the WNBA.

📝There will not be traditional Challenges associated with the WNBA Rare Run It Back drop today, but there will soon be two Showcase Challenges coming to earn some epic WNBA Moments. Stay tuned for more details at a later date.