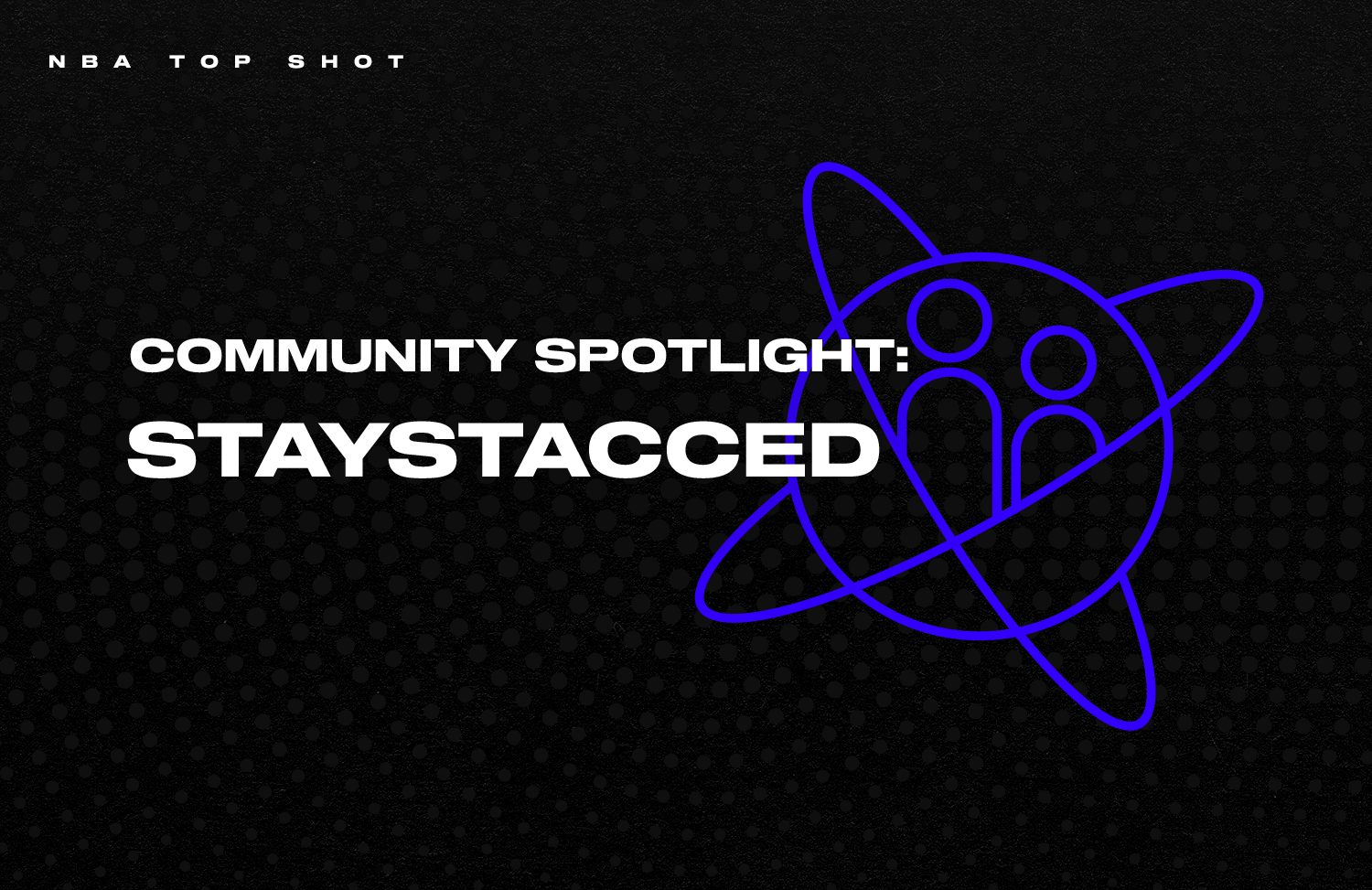 On Saturday, April 2, 2022, Kevin Durant scored a career-high 55 points against the Atlanta Hawks. This awe-inspiring performance was headlined by Durant hitting 8 of 10 three-pointers, also a career-high for most threes made in a single game by one of the most prolific and talented scorers in NBA history.

The four-time scoring champion had eight 50+ point performances prior to this Saturday masterpiece, and one of them is a 51-point game from March 21, 2014, capped off by a game-winner in double-overtime, which is his NBA Top Shot Debut from the Series 1 Run It Back set. Over the last 3 weeks, the Kevin Durant Run It Back Moment accounts for 4 of the 5 highest Moment sales in the NBA Top Shot Marketplace.

We spoke to NBA Top Shot collector and community member StayStacced from Seattle, Washington, who joined in December 2020, about Kevin Durant and his KD collection of NBA Top Shot Moments, in this edition of our Community Spotlight.

StayStacced has accumulated over 2,100 Moment NFTs since joining, including complete sets of MVP Moves, Cool Cats, 2021 All-Star Game, Summer of ‘21, Archive Set, Run It Back 2005-06, Vintage Vibes, and Fresh Threads. But the crown jewels of his NBA Top Shot account are the Kevin Durant Run It Back Moment from Series 1, which reflect his love for KD as a player. He owns more of this one Moment than any other collector on NBA Top Shot.

Here's our conversation, edited and condensed for clarity:

Tell me more about your history with the KD Run It Back. How did you decide to buy so many of them?

It was around mid-to-late January 2021 when the idea first really came to me. I was speaking with MBL267 and Kibaa on the NBA Top Shot Discord channel, about different Moments we thought were special. Wades, who is one of the first Top Shot collectors ever, chimed in to draw our attention to the Kevin Durant Run It Back Moment.

He pointed out that only 209 would ever exist, a smaller than usual number for the Run It Back Series One Set, because it was a Challenge Reward. He also pointed out that because of an injury, KD wasn’t actually playing during the ‘20-’21 season, so this Moment would be his only one to ever exist in Series 1 of NBA Top Shot history.

Once I started to really look at the Moment, I realized how special it was. A 51-point game-winning performance in double-overtime, during his MVP season for the Oklahoma City Thunder. I had missed my chance, relatively speaking, at collecting Cosmic and Holo MMXX Moments from Series 1, so when I saw the KD RIB Moments in the $200 to $300 range in the Marketplace at the time, I really saw a chance to make a move.

I was able to buy 21 of them before anyone else in the community really noticed my plan. That was the most I ever had, and now I have 13 left.

Have you always loved KD? Did you just know the Moment would be highly desirable because of how scarce it is?

I’ve always been a huge KD fan. I’ve felt he’s so uniquely talented and skilled for someone that tall. All of my friends growing up were big LeBron and Kobe fans, but I’ve always appreciated KD’s greatness. I think he’s arguably the best player in the NBA, every year he’s healthy.

‍I remember watching him at the University of Texas and just being blown away by his game, and loved watching him on the Thunder during that era. It was hard not to root for that young Thunder team. When I joined Top Shot in February 2021 and saw the KD Run It Back Moment on the platform, I immediately realized that was one of “THE Moments.”

I really love the Moment. There’s a lot of nostalgia tied to my early days in NBA Top Shot.

In the Top Shot Discord, when I first joined, I would talk to some of the early collectors, like MBL, Kibaa, Wades, StayMe7o, and Spruce all the time, and I remember asking them what they thought about the idea of me stacking KD RIB. They were all somewhat ambivalent about it, and whenever I talk to them now, they admit they wished they had bought more of that Moment when I was. In hindsight, it was definitely one of the smarter moves I’ve made in the NFT space, although I’ve made plenty of mistakes along the way.

‍For anyone who doesn’t know you, your NBA Top Shot and Twitter handles are StayStacced, which also summarizes your strategy pretty well. Why the “StayStacced” handle, and was KD’s Run It Back Moment the first NFT you had “stacked?”

I’ve always been a collector, and I've always been the type of person to “stack” something I like and collect multiples. I also used to play a lot of poker, before going into law, and there’s a term in poker about “stacking” someone that had resonated with me and my style of play, so that’s kind of the origin story behind the name.

The Kevin Durant Run It Back Moment is the first NBA Top Shot Moment I ever stacked.

After that, I stacked a bunch of Lonnie Walker Series 1 Top Shot Debuts; I’ve always loved his style and felt like the Spurs are an under-appreciated team in the NBA, even during their championship runs.

So when it comes to stacking Moments, is there a philosophy or strategy you have? Only Debut Moments? Only Rare or Legendary? How do you go about deciding what to buy in bulk?

I try to focus primarily on Top Shot Debuts.

I also recently got into collecting and stacking complete sets. I really like the All-Star Game Rare set from Series 2. It’s the first All-Star Game Moments on NBA Top Shot. It has every star player you can think of from 2021, and the game itself is really unique because it was in a “bubble” environment with no fans.

I always try to think of the historical relevance of whatever I’m collecting.

That’s also why I’m very big on Metallic Gold Limited Edition (MGLE) Moments from Series 1. It’s the first Rare set from the first series on Top Shot, and all the Moments are Top Shot Debuts. To me, it’s up there with the Cosmic and Holo sets.

After historical relevance, the second biggest factor to me is the actual player.

‍You’re obviously a big Kevin Durant fan and collector. What historical plays from his career that don’t currently exist as NFTs would you love to see minted as a Top Shot Moment?

When KD hit the dagger pull-up three in the NBA Finals over LeBron as a member of the Golden State Warriors. Watching him throughout the whole Finals with Golden State was just amazing. Every time he needed a bucket, he would get one. For him to play that well during those NBA Playoffs and Finals, with all the criticism he was getting after leaving OKC, was pretty awesome. I give him a ton of respect for that.

Those NBA Finals were such a beautiful brand of basketball. If that KD Finals Moment were to be minted, what do you think it should be? Rare? Legendary? Common?

It would have to be Legendary. You can’t make that Moment a Common. Some kind of Legendary NBA Finals Run It Back type of set would be pretty awesome.

‍So, you have more Kevin Durant Run It Back Moments than anyone else, and for anyone who may not know, you literally gifted one of them to Kevin Durant. What is going on in your head when you’re deciding to do that? Tell me about the decision to gift KD that Moment.

When I first started stacking the KD RIB Moments, I would joke around in the Top Shot Discord that one day I would send KD one of them. I just had a feeling he’d join the platform eventually, and I just had this idea in my head that if and when he did, I would gift him one.

As the year progressed and the platform evolved, and we gradually saw KD become more involved with NBA Top Shot, he had announced that he was coming to Top Shot, and I was just like, “this is it.” I knew I needed to christen him the right way and welcome him to the platform.

I already knew that I was going to give him one from the get go, so I messaged MBL267 and told him that I thought it was time to send it to him, and he was hyped and really encouraged the idea. He suggested I tweet about it, instead of just doing it quietly and discreetly, so I asked for 777 retweets within 72 hours to get people excited, and the community amplified the post beyond that in a few hours. My brother had the KD RIB serial #135, which is the one I wanted to send him, because it was the closest thing I could get my hands on to his jersey match. So I traded my brother a lower serial number KD RIB in exchange for #135, and sure enough, I got to send Kevin Durant his Top Shot Debut Run It Back Moment, and fulfill this wild idea I had almost a year prior.

It was such a cool moment and community flex in NBA Top Shot history. I love that he retweeted it and acknowledged the generosity. If there was something you could say directly to KD right now, what would you want to tell him?

I very much respect the way you play basketball, the way you handle adversity, and how you just do you.