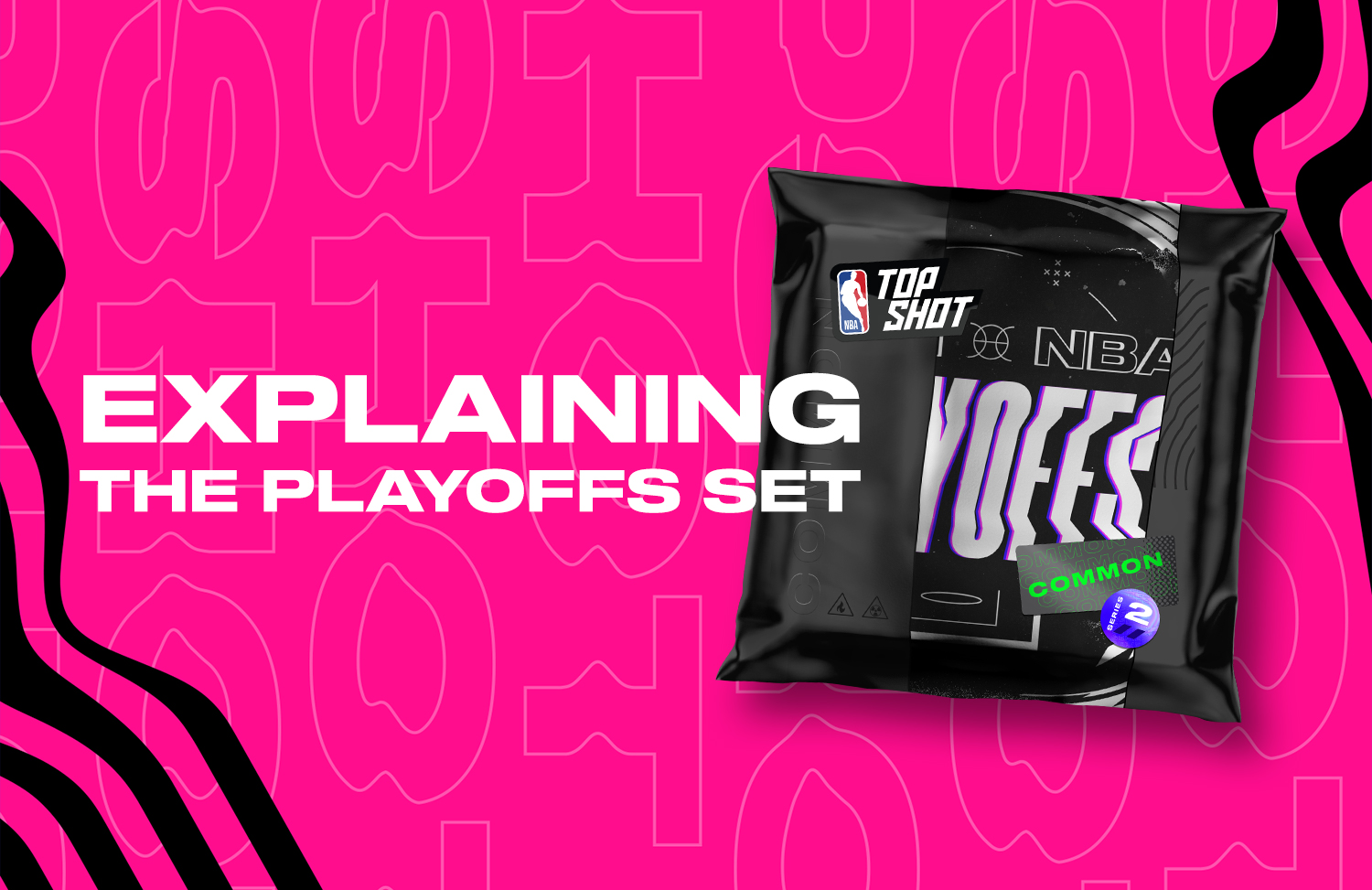 The NBA Playoffs are an epic journey, a fan experience seemingly tailor-made for NBA Top Shot. As we make our way through two action-packed months of marquee matchups, game-winners and legacy-defining performances, we wanted to lay out our content roadmap for the postseason and provide our collectors with additional context as they plan their strategies.

The first playoff set that collectors have already gotten a taste of is our 2021 NBA Playoffs common set, so we wanted to provide some additional details about it.

Currently, you can already see the 36 plays on the 2021 NBA Playoffs set page:

When planning out the 2021 NBA Playoffs set, we weighed the benefits of multiple approaches that would allow us to tell as complete a story of the postseason as possible. We wanted to offer an accessible set that was inclusive without being excessively large.

Additionally, while the set itself is relatively robust, we wanted these Moments to feel as though they come at a premium on an individual basis. We built that into the plan when mapping out edition sizes. We pledge to keep edition sizes at 12,000 or less for every single Moment in the 2021 NBA Playoffs set.

Some other FAQs we know you all have:

Q: Can you break down how you arrived at the total play count?

A: In addition to the 32 plays and eight Challenge Rewards already released, distributed, or announced, we plan to have:

By including a few Finals and Conference Finals Moments in the 2021 NBA Playoffs common tier, we can make some of them accessible to all collectors while still committing to keeping the rare and legendary sets scarce.

Q: What's the whole plan for the 2021 NBA Playoffs packs?

Release 1:
Our first release of the common set, which arrived Friday, June 11,  was available only by reservation and included 32 of the top First Round playoff Moments. An additional eight Round 1 Moments have been or will be unlocked in challenges.

Release 2:
Unlike the reservation-style approach to Release 1, there will be a limited supply of 200,000 Playoff Packs available in Release 2, so it won’t be guaranteed to all collectors. As a common pack, we expect the Collector Score requirements to be relatively inclusive to get into this queue.

This second release will drop on June 25, shortly after the Conference Semifinals wrap. Each pack will contain two common Moments from the 2021 NBA Playoffs set. One from the First Round and one from the Second Round.

While there will be a greater chance of pulling an all-new First Round Moment in these packs, all of the non-challenge Moments from the First Round will be in circulation here, too.

‍
Importantly, collectors who are lucky enough with the queue will be guaranteed one Second Round Moment in these packs. We’ll be debuting a total of 24 Second Round plays in these packs, three for each team. This release will additionally unlock eight new challenges from the Second Round. Heads up - some of the Moments that debuted in Release 1 will be required to complete these challenges.

Our third release, coming early July, will also include two Moments from the 2021 NBA Playoffs set. As there will only be up to 166k of these packs at most, there will be a queue used to gain access and not all collectors will be able to score one of these packs.

The final 10 First Round plays will debut with this release, too. Each pack could include any of the 54 First Round non-earnable Moments, with a higher probability of pulling the new releases.

After Release 3, no new plays for the first three playoff rounds will be added to the set.

This final release of the common 2021 NBA Playoffs set, expected shortly after the NBA Finals conclude, will also include two Moments from the set.

This will be the only pack to include a chance at a common Moment from the 2021 NBA Finals. We anticipate that four plays from the NBA Finals will be added to this pack and that only 42k packs will be released.

This pack will also contain the final distribution of First Round Moments, all of which will have already debuted in one of the first three releases.

There will also be two challenges from the Finals, one per team.

Note that to complete each team's challenge, you’ll need one of each team's non-reward plays from the common 2021 NBA Playoffs set.

Q: How will earnable Moments play out moving forward?

A: There will be many opportunities to earn Moments through the playoffs.  Normally we would distribute every 10th Moment via challenges in our flagship Holo and MGLE sets.  Here the target is 22 rewards and 90 Moments in packs so roughly every fifth Moment will be available as an earnable Moment.

This allows us to keep Challenges manageable in size and at a quick cadence—reusing playoff Moments as requirements for multiple challenges as we progress through the playoffs.

Q: Why was the first Challenge three days and the next one four days?

A: With Holo Icon dropping on Thursday, and knowing from experience that we can help to ensure a smoother pack drop and Marketplace experience by spreading out the drop and the distribution of Challenge Rewards, we elected to extend these challenges to Friday. Expect us to return to a 3-day time for the final two First Round challenges which should run Friday-to-Monday and Monday-to-Thursday. Future challenges should run on similar timeframes.

Q: Can a player appear in all six releases?

A: Theoretically yes, but our goal is to make sure that if we give a player a play in every set that each and every one of these Moments was pivotal and important to telling the story of the playoffs this year.

On the one hand, it is absolutely correct that a new Kevin Durant Moment means that the collector who wants a Kevin Durant Moment, but not all Kevin Durant Moments, now has another choice and may opt to go away from the ones currently in circulation. On the other, there will inevitably be very genuine demand for Durant’s next #NBATopShotThis Moment, whether that comes in the form of his Game 5 long range trey to secure the win or some hypothetical future feat still to come in the round. It is a delicate balance and one we are constantly iterating and monitoring to try to master.

As a reminder, as a team advances and sees more Moments minted, there are also additional opportunities for those Moments to be used in challenges and quests providing ongoing utility throughout the playoffs.

We hope you find this guide helpful. Until next time, happy collecting.

‍Check the Marketplace for the 2021 NBA Playoffs Moments that have already been released.