Finals Quest Game 6: On The Brink 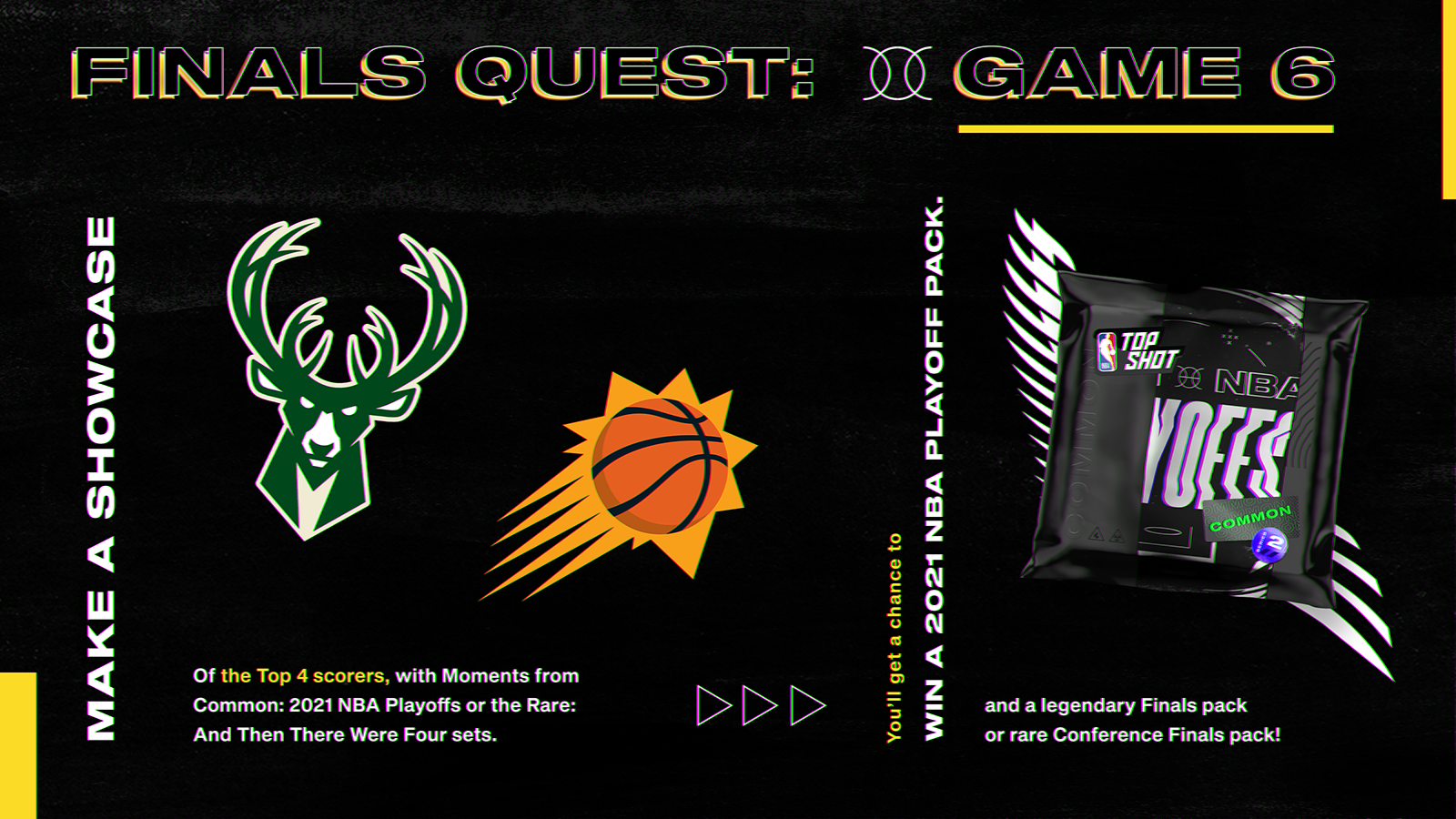 Congratulations to the 1000 Collectors who will be receiving a 2021 NBA Playoffs Pack.

Don’t forget that your submission also got you an entry to the Grand Prize drawing, which will be taking place after the legendary Finals pack drop.

Due to maintenance on the site for large portions of the day, we are extending Finals Quest Game 6 to Thursday, July 22nd at 10 am PDT. Please keep your Showcases intact till that time.

On Saturday, behind their trio of stars, the Bucks roared back from an early 16 point deficit to steal a crucial Game 5 on the Suns home floor, punctuated by an already-iconic alley oop from Jrue Holiday to Giannis Antetokounmpo. The Bucks are now on the brink of their first championship since 1971, and look to close out the series on their home floor.

GO TO THE QUEST>>

For tonight’s critical Game 6, we’re also slightly changing how to get in the game. You’ll need to create a Showcase of the four (4) top scorers from Game 6, but the Moments must be from either the the common 2021 NBA Playoffs (Series 2) set or the rare And Then There Were Four (Series 2) set.

Below, find the exact details on how to get in on the action for Finals Quest Game 6.

Create a Showcase with four Moments based on the guidelines below and earn yourself a chance at a free 2021 NBA Playoffs pack.

To qualify for one of the 1,000 available Playoff packs...

Be sure to check out the new Showcase Quest Feature on-site, which makes it even easier for you to build your Finals Quest Game 6.

As long as you put exactly four Moments (from the two sets listed above) from the four leading scorers of Game 6 of the NBA Finals in a Showcase, and name your Showcase Finals Quest Game 6 by Thursday, July 22nd at 10:00 am PDT, you’ll earn a chance at a 2021 NBA Playoffs Pack.

Additionally, with this being the NBA Finals, don’t forget that each successful quest entry earns you an entry in the Grand Prize drawing. Here’s a quick refresher on how that works:

In addition to giving away 1,000 NBA Playoff packs for Finals Quest Game 6, there will also be an opportunity to earn a legendary NBA Finals pack or a rare Conference Finals pack.

Here are the details on how to earn one of the 10 legendary packs or 50 rare packs (Grand Prize).

NBA Top Shot Economist: And Then There Were Four Drop Recap