Introducing Run It Back Legacies 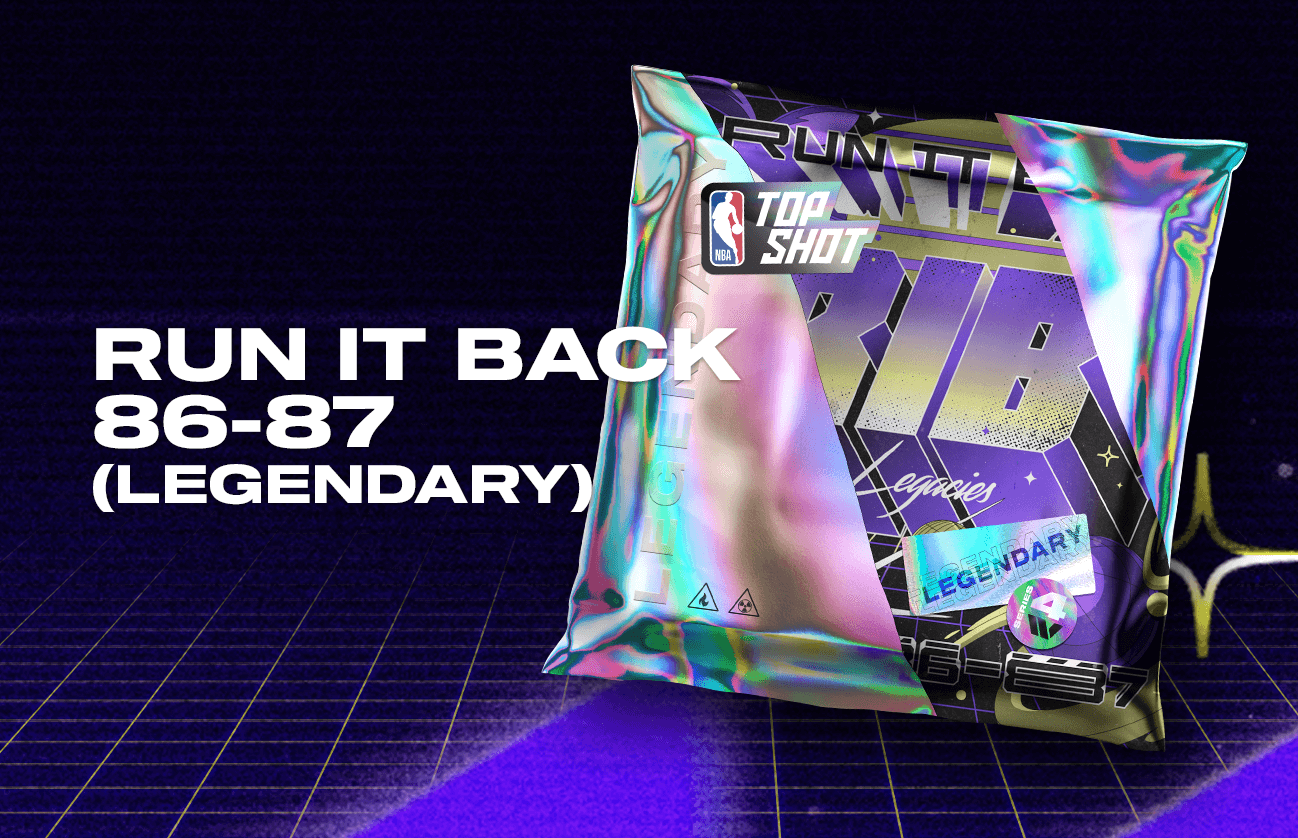 Run It Back Legacies is a new NBA Top Shot collection reserved for historically great performances and plays in legacy-defining seasons by Hall of Fame players.

The 1986-87 NBA season was truly special, and today we’re proud to introduce the five Hall of Famers who have earned Legendary Top Shot Debut Moments.

Which will you collect? Get ready for the pack drop here. ‍

On a cold winter night in Atlanta, Georgia, a packed crowd full of Hawks fans witnessed a career-high 57 point scoring performance by Dominique Wilkins against the Chicago Bulls.

Dominique’s Legendary Legacies Moment is all hustle and show, with his long arms and invasive reach leading to a steal and fast-break opportunity that’s capped off with a windmill dunk worthy of the Human Highlight Film moniker.

It’s the most points ever scored in a Top Shot Debut.

In Game 4 of the Eastern Conference Semifinals, Isiah Thomas poured in a game-high 31 points, including this iconic game-winning buzzer-beater, paired with an even more iconic celebration. Detroit Pistons 89, Atlanta Hawks 88.

Isiah's Legendary Legacies Moment was witnessed by Pistons fans on Mother's Day Sunday in Detroit, Michigan, with a shot will forever be a part of Zeke’s legacy.

Only twice in NBA history has a player recorded a triple-double while also recording at least 5 points, steals, blocks, rebounds and assists, aka a “5x5.” Both times, that player was Hakeem Olajuwon.

On a Tuesday night in Houston, Olajuwon logged 53 minutes — the most in his entire career during a single game — in a double-overtime defeat against the Seattle SuperSonics, racking up 38 points, 17 rebounds, 12 blocks, 7 steals and 6 assists. The 12 block performance ties a career-high in the category.

Hakeem’s Legendary Legacies Moment captures the big man draining his signature shot, the Dream Shake, in a truly outstanding performance with a move that will be mimicked in gyms for ages.

The Boston Garden was rocking on Sunday, May 17, for Game 7 of the NBA Eastern Conference Semifinals.

Kevin McHale laced ‘em up while playing in a boot with a broken foot, putting it all on the line for a chance at one more ring.

McHale’s Legendary Legacies Moment finds him securing a loose offensive rebound and keeping the play alive on the brink of falling out of bounds, finishing the possession with a big baseline dunk — racking up 26-points and 15-rebounds in the process — in a gritty, clutch performance that will forever define his legacy.

It’s Game 6 of the NBA Finals in Los Angeles, and James Worthy is about to make one of the most recognizable plays in Lakers history.

All it took was two touches of the ball — one to tap it away from the Boston Celtics and one to tap it towards a streaking Magic Johnson while diving head first out of bounds — to cement a legacy.

As legend has it, the Lakers never trailed again in the game, closing out the Boston Celtics to win their 4th NBA Title of their 1980s dynasty.

Worthy’s Legendary Legacies Moment is one of the signature defensive plays in basketball history and most clutch performances of his career.

Collect them all on September 23.

Run It Back is the flagship historical Rare collection on NBA Top Shot, previously capturing greatness from the 2013-14 and 2005-06 seasons.

We’re proud to continue our tradition of celebrating NBA history with fans of the game in this trip to 1986-87.

The story of this season will be told across four collections, each intersecting with Magic Johnson’s first MVP campaign and the Los Angeles Lakers winning the NBA title for the 4th time in the 1980s, defeating their rival Boston Celtics for the second time.

‍The Archive Set is our Common historical collection, designed to be accessible for everyone and celebrate the players and fan favorites who thrived in that era.

‍Run It Back is our Rare historical collection, designed to be special collectibles that document the most important players and stars of that season.

In the process of building this drop — the most comprehensive historical drop on Top Shot to date — it was clear that some players and Moments were worthy of a new treatment that captures and recognizes the greatness of the Moments more appropriately.

‍Run It Back Legacies is our new Legendary historical collection of extremely limited edition grail-worthy collectibles. It’s been designed to pay homage to beloved Hall of Famers whose names will forever echo through the halls of NBA history, but aren’t certain to receive a dedicated Anthology collection later on.

No player in Run It Back: Legacies will have another Moment on NBA Top Shot in Series 4.

There are no short-term plans to mint the next Moment for any of these Run It Back Legacies players, or any other player from the 1986-87 drop.

As we continue telling the story of NBA history through video collectibles, fans of these iconic superstars may have the opportunity to collect more accessible Moments from their careers in the Common and Rare tiers — when the time is right.

Looking to the future of NBA Top Shot, we’ll continue to celebrate the past.

The Anthology, a multi-tier Set of dedicated Historical collections reserved for the Greatest Of All Time, will return. Magic Johnson’s story is over for now. Who’s got next?