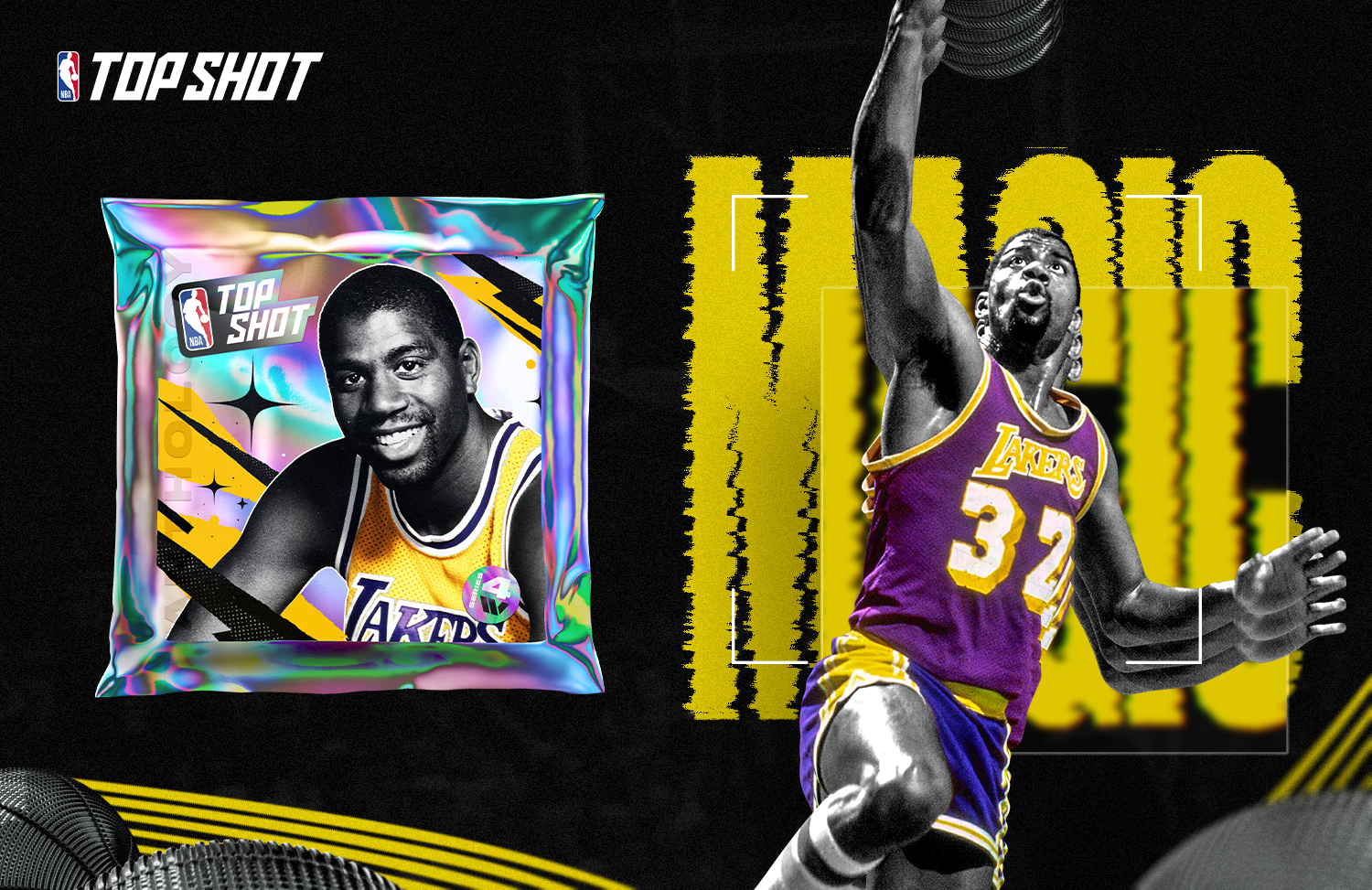 Our partnership with Magic is a special occasion that calls for an all-new collector experience, including a first-of-its-kind Anthology set reserved for iconic plays from NBA legends.

A time capsule into the hallowed halls of NBA history, each Magic Johnson Anthology pack in this drop contains a single guaranteed Magic Johnson Moment™ NFT in either the Legendary or Rare tier. Each of these four Moments took place in seasons when Magic and the Los Angeles Lakers won the NBA Championship.

1,200 of these packs will be released in a drop reserved for anyone with a Top Shot Score of 150,000+ with the remaining 400 available to anyone in a Queue with 0 Top Shot Score requirement.

Here’s a look at the first 4 Anthology Moments making their historic debuts this June, all hand-selected by Magic Johnson himself.

Never Fear, E.J. Is Here: In Game 6 of the 1980 NBA Finals, rookie phenom Magic Johnson started at center against the Philadelphia 76ers, posting an incredible 42 point, 15 rebound, 7 assist and 3 steal performance that clinched the NBA championship for the Los Angeles Lakers. Magic filled in at the 5, even taking the tip-off to send a message to the entire Philly team and home crowd. The championship winning performance from Magic's rookie year is memorialized with a fearless and-one layup against the 76ers’ enforcers in the championship-clinching game. This Legendary Moment is his NBA Top Shot Debut, and only 80 will ever exist.

Now You See It, Now You Don’t: Magic’s playmaking ability and passing creativity gave birth to a new era of basketball and has inspired countless guards to follow in his footsteps. This around-the-world assist during the 1984-85 season is one of his signature highlights, and a Legendary assist in Magic’s Anthology set, with 85 minted on the blockchain as an NFT. The 24 point, 10 rebound performance in a 130-112 victory over the Phoenix Suns starts with the 6’9 guard grabbing a rebound, leading the transition fast break, deceiving a duo of defenders with a dynamic handle and dishing a dime for an emphatic slam.

Hocus Pocus Pass: In a 133-115 victory against the San Antonio Spurs, Magic Johnson racked up 13 assists, with none more special and mind-bending than a head fake and ball fake combo that stands the test of time as one of the most instantly recognizable highlights in a career full of outstanding plays. This Rare assist Moment will only have 499 to ever exist and comes from Magic Johnson’s final 1987-88 Championship season as a dominant era of Lakers basketball came to an end.

Game. Set. Magic: This Rare Moment, minted to 999, is the first matchup between the Los Angeles Lakers and Boston Celtics following the Lakers victory over the Celtics in the NBA Finals from the 1986-87 season. The Celtics were in position to snatch the home win against the Lakers, but Magic had other plans. With hardly any time left on the clock, Magic catches an inbounds pass along the baseline and instantly turns into a running, one-footed leaping bank shot over a double team that bounces off the glass right through the net and beats the buzzer for the surprise 115-114 victory. Magic storms off the Celtics’ court with his signature jubilation and energy, celebrating a clutch win in enemy territory. The Boston Celtics would go 0-2 against the Los Angeles Lakers in the season, and the Lakers would repeat as NBA champions, their 5th title during the Magic era.

Two additional Magic Moments will follow in a subsequent drop — a 5th Anthology Moment featuring the iconic Baby Hook from the 1987 NBA Finals. Minted to just 32 in honor of his jersey number, this Moment will sit in the Legendary tier. Magic’s 6th Moment will arrive in our Rare tier as one of the headliners in a future set dedicated to diving deeper on that legacy-defining 1986-87 campaign. Hidden among packs as an especially prized pull in that future drop will be the Baby Hook, one of the most recognizable shots in basketball history and an immediate collecting Grail for any fan who grew up bearing witness to the legend we've come together to celebrate.

Magic Johnson spoke with The Athletic’s David Aldridge about his arrival on NBA Top Shot and the world of NFTs and Web3. Read their interview here for details about The Anthology and this Magic Moment directly from the man of the hour.

On May 31, you’re invited to join NBA Top Shot for a Q&A with Magic Johnson on Twitter Spaces, and on June 1, The Athletic’s team of NBA writers will take a deep dive into the historical and cultural significance of each Moment in the Magic Johnson Anthology in a dedicated tribute to basketball royalty.

Collectibles of this caliber are getting a brand new artistic treatment that we’re excited to share with you.

We’ll see you on June 7 for a very Magic day in NBA Top Shot.