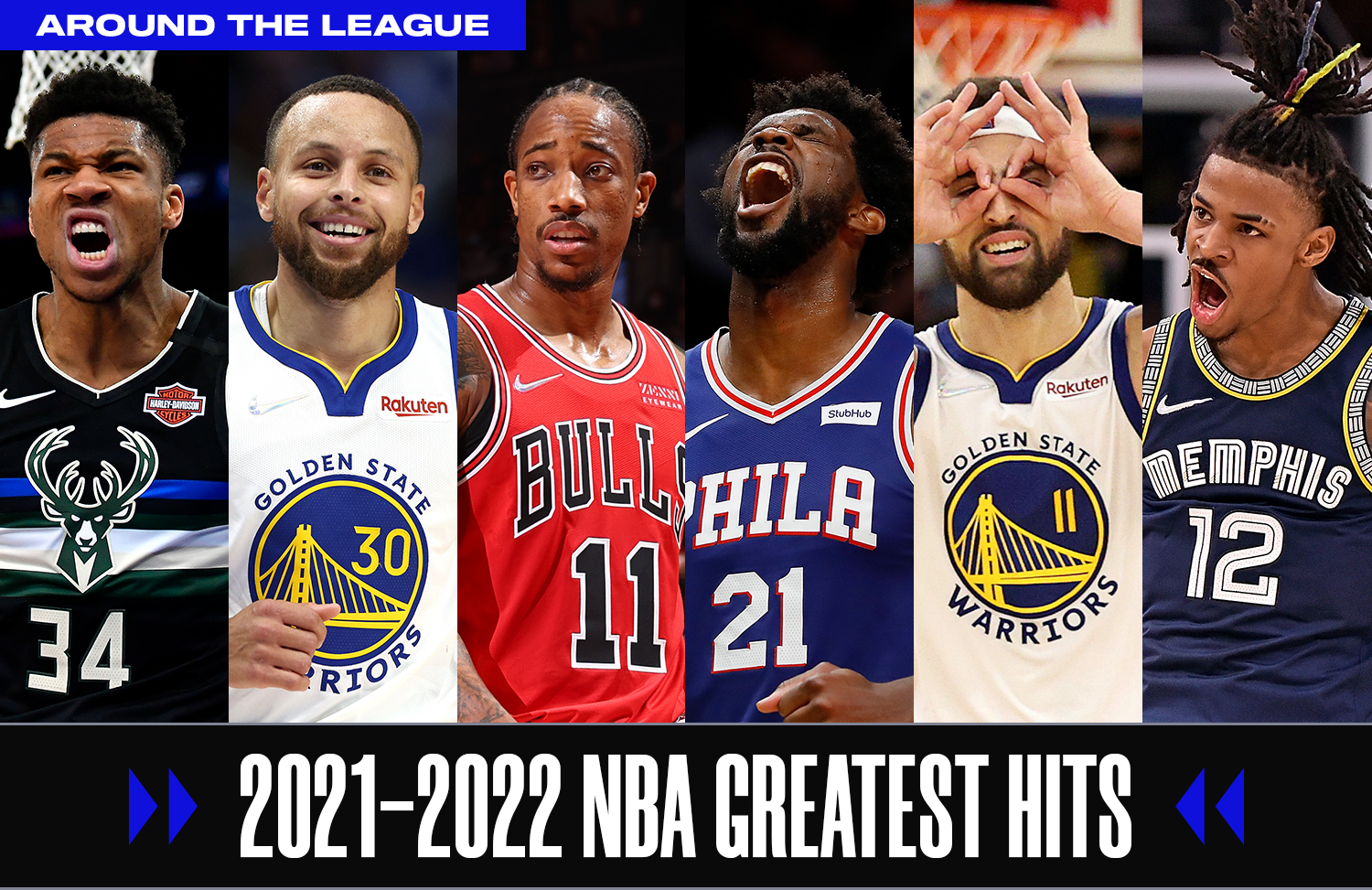 The 2021-22 NBA season was special in so many ways, we’re taking a minute to reflect on some of the greatness that went down. Each historic milestone, career-best night, iconic shot and inspiring comeback is an officially licensed collectible created in partnership with the NBA, and you can own them all.

All season long, the best plays from each team’s squad were carefully selected, expertly edited, and designed into special digital collectibles — videos that capture league history and personal memories, serving as a tribute to fandom and all that comes with it.

To honor the 2021-22 NBA campaign and Series 3, in a blast from the recent past, here’s a look at all the notable Moments that took place. To collect your favorites, create an NBA Top Shot account today.

Climbing up the career ranks to join iconic players is an extraordinary achievement. It’s the league’s passing of the torch – one generation’s basketball heroes paving the way for today’s stars to flourish. The 2021-22 NBA campaign featured historic career milestones for established names across the league.

Giannis Antetokounmpo is reaching accolades so fast it’s hard to keep up. He’s collecting All-Star and All-NBA appearances in bundles, and has a couple MVP trophies and a championship to his name.

He’s not known for his deep shotmaking, but it was a 3-pointer in the clutch on March 31, 2022 that cemented his top spot on the Milwaukee Bucks’ all-time scoring leaderboard. The 42-point game-winning performance put Giannis in the #1 spot in career points scored as a member of the Bucks — 14,212 at the time, now up to 14,321. Good luck catching him.

Speaking of catching greatness, where do we start with Steph Curry?

He’s entering unparalleled legacy territory for his championship pedigree and 3-point prominence. Curry fans are popping up around the globe, witnessing a long-ball style that’s never been seen before in professional basketball.

With increased anticipation, Curry entered Madison Square Garden for the 789th regular season game of his career. In the first quarter, on one of the grandest stages, he officially became the unquestioned 3-point G.O.A.T.

In Year 16, LaMarcus Aldridge knocked down a mid-range jumper for his 20,000th point, becoming the 48th player in NBA history to reach that mark.

It was all in the routine for Chris Paul. He’s been handing out free points his entire career, and in an easy one for the Point God, Paul earned his spot at No. 3 on the NBA’s all-time assists list.

Oh, and did we mention it was in a game where he finished with 18 dimes? At age 36, CP3 continues to shine.

Lou Williams, the three-time 6th Man of the Year, found an extra gear in his 17th season, slamming home his 5,000th made field goal of his career — a milestone moment for a veteran of the game.

The 3-point craze is taking over. Guys are pulling up from way downtown, and the kings of the pace and space era are loving it.

This season, Malik Beasley, Robert Covington and Bojan Bogdanovic all tied for the most 3-pointers in a single game (11).

Beasley’s was a Timberwolves franchise record against Oklahoma City.

Beasley just one-upped sophomore sensation Anthony Edwards, who confidently erupted for 10 triples back in December, his career-high from beyond the arc.

Later that month, Patty Mills set a Christmas Day single game record, as he ran circles around the Lakers and provided eight 3-pointers during the highly-anticipated holiday slate.

Evan Fournier took MSG by storm. His off-balance, spot-up, off-the-dribble 3-pointers wouldn’t stop falling vs. Boston. Each successive make from deep – there were 10 in all –  created a celebration that shook Knicks fans to their core. The ten triples marks a career high for Fournier, the most three-pointers ever hit in a single game by a New York Knick, and the second-most threes ever hit in a game in MSG — second to none other than Steph Curry.

‍Kelly Oubre Jr. couldn’t miss either — his 10 threes, a career-high, helped Charlotte tally a 158 points in a victory.

This one was a slight surprise. New Orleans center Jonas Valančiūnas decided to step outside for a 3-point run of his own against the Clippers. He was unconscious in the first half – going 7-for-7 from downtown.

DeMar DeRozan’s instant impact on the Bulls sent shockwaves across the league.

His name floated around early MVP conversations as he single-handedly put Chicago on his back in crunch-time situations. Remember his back-to-back triumphs at the buzzer?

It’s the first time a player ever hit back-to-back game-winning threes in consecutive nights, and it just so happened to happen on December 31 and January 1, a wrinkle to the performance that’s sure to stump NBA trivia fans for years to come.

Then, Spencer Dinwiddie went for revenge! Barclays Center was completely silent after the former Net drilled his dagger against Brooklyn.

How about the Knicks? They experienced the fortunate and not-so fortunate. On the winning end – RJ Barrett went off glass, turning Madison Square Garden into a madhouse.

The losing end – venturing away from the Big Apple, the Knicks couldn’t get it done against Cameron Johnson, who stepped into a larger role without Devin Booker and Chris Paul. Johnson’s 31-foot triple for the win was the bookend of his 38-point performance.

The longest game-winner in NBA history? 61 feet deep! The record now belongs to Devonte’ Graham, who shocked all of Oklahoma City when the hometown celebration started a bit too early.

Well, and of course, Steph Curry is Steph Curry. This shot marks his first buzzer-beating game-winner after 13 years in the NBA.

In one of the tightest Rookie of the Year races ever, Scottie Barnes (the award-winner), Evan Mobley and Cade Cunningham each exceeded expectations in Year 1.

Here was Cunningham showing out in front of Mobley and the Cavaliers. The Moment is from his second triple-double showing of the year, making him the first rookie in Pistons franchise history to record multiple triple-doubles.

If you’re dying to see every Moment from both Barnes and Mobley, check them out here.

‍Alperen Sengün made some noise down in Houston. Sengün’s unique offensive IQ and dazzling passing made it onto a Metallic Gold LE Rare Moment.

The Nets’ Cam Thomas stayed calm under pressure in his opening season. His Top Shot Debut was something to behold. When all eyes were on him, he iced the Spurs with an off-balance runner in an overtime thriller.

DON’T CALL IT A COMEBACK

“This honestly might’ve been the best moment of my career.”

Covering Klay Thompson’s return is a must. He made a statement. After 941 days away from the court, Thompson dunked over two Cavaliers defenders with authority. With a mean mug, the 5-time All-Star let the league know – he was back.

On January 25 against the Wizards, after being down 35 points at halftime, the Clippers showed no quit.

Luke Kennard dragged LA back into the game late, sinking tough shots from all over – including a 4-point play that gave his team the first lead of the night. The Clippers went on to win, completing the second-largest comeback victory in NBA history.

Some players have that feeling, where everything lines up perfectly.

Those hot streaks when the ball barely touches the net on the way down. When passes find the pocket. Time slows down, and everyone encourages you to keep it rolling.

This season, a few guys had career-best performances.

The day after Karl-Anthony Towns dropped a career-high 60, Kyrie Irving went ahead and matched it – in only 35 minutes of play.

Irving’s 60 included a 41-point first half, and an efficient 20-for-31 from the field. He took the show on the road, delighting the NBA community with his unstoppable offensive flow in Orlando.

Joel Embiid put his spell on the Magic too. One of the most dominant centers the league has ever seen needed only 27 minutes to score 50 points.

The camera loves Ja Morant. He’s a social media highlight waiting to happen, and when on the court this season, he kept everyone on notice.

In a standout performance with 52 points, Morant threw down a dunk that’s arguably the best – and most viral – play of his young career. He rose above Jakob Poeltl and posterized San Antonio's big.

As a sprouting young talent, Saddiq Bey put his stamp on the 2021-22 campaign.

Bey kept the Pistons bench on its feet. All in one Moment, his fall-away jumper, steal and long-distance heat check was a major part of his career-high 51 points.

How about making a late-season impression? Josh Hart showed Portland what he can bring to the table when he poured in a personal-high 44 points to lead his new Trail Blazers teammates to victory.

It’s not all about buckets.

A couple guards kept on giving.

First-time All-Star Darius Garland was in his unselfish ways for Cleveland when he served up a career-high 18 assists.

Bradley Beal, normally counting basket after basket for himself, was in the sharing mood. Feeling the New Year spirit, Beal dished a career-best 17 assists to his Wizards teammates.

The high point of the postseason was Steph Curry’s miraculous Game 4. Trailing 2-1 in the series, Curry delivered much-needed cushion to the Warriors.

His 4th-quarter dagger, on the way to 43 points, deflated the Celtics’ highly-touted defense.

In the Eastern Conference Finals, Jimmy Butler did everything in his power to fuel the Heat’s competitive fire.

Butler fed off the Miami crowd’s energy in Game 1, snatching back-to-back steals in this Moment, leading to 41 points, 9 rebounds, 5 assists, 4 steals and 3 blocks.

In many metrics, his opening performance was one of the best individual outings ever seen in the East Finals.

The ultimate floor general he is, Chris Paul took control in Game 6 to close out the pesky Pelicans.

Paul found poise in a high-pressure situation. He scored a game-high 33 points on perfect 14-for-14 shooting, which was the most playoff points without a miss in NBA history.

Jayson Tatum made Boston history. His last-second layup against the Nets in Round 1 was one of the most-thrilling team plays of NBA postseason history.

Not to mention, in 75 years of Celtics glory, it became the franchise’s only game-winning Playoff buzzer-beater ever.

What a year! We can't wait to see what records get broken in Series 4, and celebrate NBA greatness with our global community of basketball fans. Collect your favorite Series 3 Moments today by visiting the Marketplace.