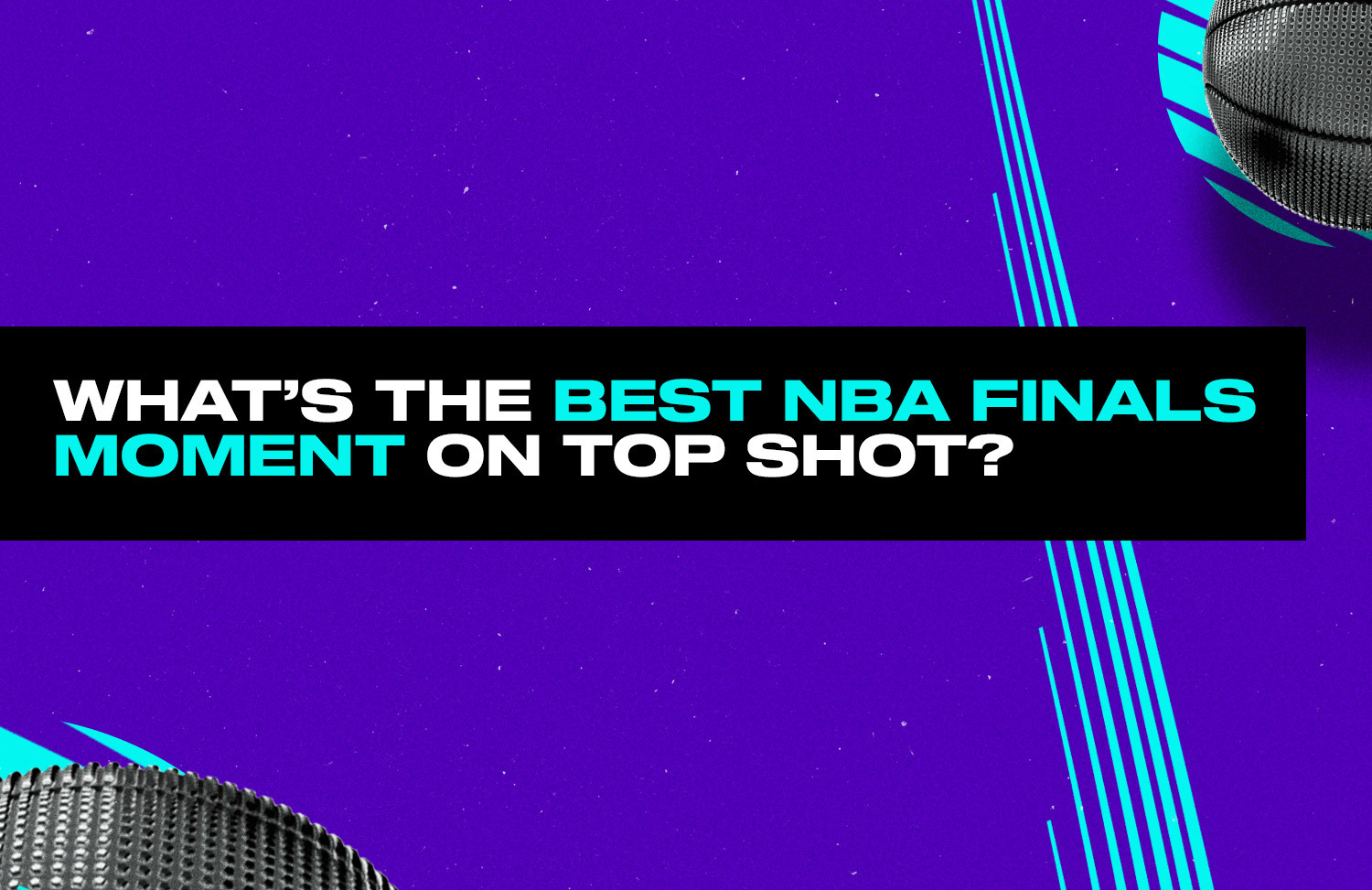 As the Celtics and Warriors duel for a title, the thrill of the “now” has a firm hold on NBA fans.

Stephen Curry’s ascendance to an all-time great, in pursuit of his first Finals MVP.

Jayson Tatum and Jaylen Brown’s partnership on the grandest stage.

The inspiring heroics of Al Horford and Andrew Wiggins.

The intensity and drama surrounding each matchup in San Francisco and Boston has any basketball enthusiast glued to the action. Hoops at its highest level, right in front of our eyes, soon to be Moment NFTs that you can collect to commemorate and celebrate greatness, with some receiving the expert commentary and narration from our Voice of the Playoffs, Doris Burke.

With Top Shot’s NBA Finals drop coming on June 23, we can’t help but reminisce about the greatness we’ve witnessed since our inception, from “The Bubble” experience to the “Deer District” extravaganza, with some of the league’s 75 greatest players involved — LeBron James, Chris Paul, Giannis Antetokounmpo and Anthony Davis.

There are even a few historic NBA Finals gems, and Top Shot Debuts, in the Run It Back Series One set and Magic Johnson: The Anthology.

With new entrants into this prestigious territory on the cusp, and a Championship Badge awaiting a home for Series 3, we have to ask: what is the best NBA Finals Moment on NBA Top Shot? The most impressive? Most clutch? Most iconic? ‍

To answer that question, we need your help.

We have our ideas, of course, but are looking to our community to help us decide.

We’ve whittled down the list of Series 1 and Series 2 NBA Finals Moments to 16 contenders, and over the next few days across NBA Top Shot’s official Discord, Twitter and Instagram channels, you’ll have the chance to make your voice heard, and crown a champion of champions.

For the 16 contenders, we hand-picked 4 Finals Moments from the Bucks, Suns, Heat and Lakers, and seeded them each 1-4 across four different regions. For some self-imposed restrictions, we ensured that one team could not have two #1 seeds, so Jrue's Finals Steal and Giannis' Finals Block could not each be a #1 seed, and made sure that all four teams had one Moment in each region.

By playing along, you won’t just help determine which NBA Finals Moment is the best, but will also become eligible to win prizes we’ve prepared for the occasion:

So let’s celebrate the past and get ready for the thrilling conclusion to the 2021-22 NBA season by doing what sports fans do best — debating greatness. As the tournament unfolds, we'll update the bracket and this page with the results until a winner is crowned. You can watch all 16 Moments and read about what makes them great below, and we look forward to seeing you on June 23 for the next drop of iconic NBA Finals Moments on NBA Top Shot.

Savvy, all-league defender Jrue Holiday put his defensive prowess to the test against Phoenix. When the Bucks made the monumental midseason trade for Holiday, it was a play like this, in a pivotal Game 5, they envisioned him making. With seconds remaining, as Devin Booker pumped and spun, Holiday snuck over and ripped away the ball. He rushed out on the break, and while scanning the floor, found teammate Giannis Antetokounmpo for a game-clinching alley-oop for the ages.

Duncan Robinson’s 3-point jumper is a thing of beauty. His journey as Division III standout from Massachusetts and New Hampshire, to promising sixth man out of Michigan University, to Undrafted prospect, to reliable Heat reserve is a miraculous athletic feat. This shot from the first half of Game 3 against the Lakers, with his feet on the logo and the ball sailing over the outstretched arms of LeBron James, helped Miami preserve an early lead, which eventually led to the team’s first win of the series.

If ball movement is your thing, look no further. The tantalizing unselfishness of the 2021 Phoenix Suns is what makes this Moment special. In the second quarter of Game 2 vs. Milwaukee, the ball zipped around and around the perimeter. 12 TIMES! Jae Crowder. Devin Booker. Mikal Bridges. Chris Paul. All sharing a slice of the offensive possession. But hey, someone needs to make the play. Deandre Ayton was that guy, in the right place at the right time, cutting to the basket and finishing through contact for the layup.

Promise and potential are worth investing in, but veterans win games. Every title team has at least one 3-and-D, catch-and-shoot master with crunch-time experience. When Markieff Morris brought in this dime from LeBron James, he didn’t hesitate. Square in the corner. Spot up. Elevate. Hold the follow-through. Nothing but net. Moment secured. This play went down in Game 3 against Miami, where Morris recorded 19 points off the bench.

Chris Paul has made opponents look foolish his entire career. He thrives on moving players around the court like chess pieces. He finds the slightest edge and takes advantage, which he did in this Moment against former Defensive Player of the Year Giannis Antetokounmpo in transition. Paul found a sliver of space towards the lane, hit the brakes and maintained his poise to knock down an and-one floater. Paul’s 32-point, 9-assist performance had the Phoenix faithful rocking to start the series.

Giannis Antetokounmpo acts on instinct. There’s no other way this awe-inspiring, jaw-dropping, legacy-driven defensive stop in Game 4 could exist. Antetokounmpo, the two-time MVP, shaded over to help on the drive against Devin Booker in the closing minutes. Milliseconds later, in an act of brilliance and composure, he sprung to the rim to block former No. 1 overall pick Deandre Ayton. The Moment will forever be remembered as the turning point in the series, as Milwaukee tied things up at two games apiece.

There’s no categorizing Anthony Davis. He’s not just a forward or a center; a shot-blocker or a finisher. He’s a generational talent. The multi-faceted Davis came up huge for this Moment in Game 4 vs. Miami. After a rocking jab-step, he let the long ball fly in crunch time over up-and-coming center Bam Adebayo. The shot hit nothing but net, and Davis let the world know he can do it all.

During Game 3 of the NBA Finals, in his Top Shot debut, Jae Crowder unsurprisingly made a winning play. All season the journeyman wing player was relied upon for toughness, versatility, spot scoring and everything in between. Following stints in Dallas, Boston, Cleveland, Utah and Memphis, Crowder reunited with former Marquette teammate Jimmy Butler to play under the brightest lights. Crowder’s Moment was a culmination of his veteran talents, as he swiped the ball away from Anthony Davis and threw a dazzling overhead dime the bounced into the hands of Tyler Herro.

It was as if the lane bowed down and opened up to the greatness of The King. Late in Game 6, LeBron James cut from the top of the key, received a pass from Alex Caruso, split two sprawling defenders and rocked the rim with authority. In his 17th season, for Laker title No. 17, James proved his explosiveness and impact could still be felt at an MVP level. His closeout triple-double was a masterpiece, and cemented his 4th NBA championship.

Absolutely tactical. A work of art. Poetry in motion. Devin Booker put on a mid-range clinic against the Bucks. His footwork and dribble combinations kept defenders guessing on any given play. Even an inch of space was all he’d need to deliver a devastating dagger. On his way to 40 points in Game 5, Booker went in his bag to navigate his way around Khris Middleton. From in-and-out crossovers to hesitations, Booker earned every bit of this leaning jumper Moment.

Anyone willing to meet Anthony Davis at the rim has a streak of fearlessness in him. Kendrick Nunn wasn’t necessarily postseason battle-tested at the time, but he more than earned his gritty Moment. Nunn, undrafted following the 2018 Draft and a member of the 2020 All-Rookie First Team, took on the challenge in Game 2 to protect the basket. The first-year, 6’2” guard elevated to deny Davis from an easy layup.

Forever fundamental and calm under pressure, Khris Middleton provided Milwaukee with the clutch shooting the team desperately needed around Giannis Antetokounmpo in the 2021 Finals. Middelton’s a threat to score from all over the court, and it showed when Suns players rushed out to contest any of his mid-range looks. His footwork was on full display in this Moment when he spun away from Torrey Craig and went up-and-under on Devin Booker for two of his 29 points in a thrilling Game 2.

Jimmy Butler put the Miami Heat on his back, plain and simple. Shot after shot, he faced the attention of multiple Los Angeles defenders. Staring elimination in the face with a minute remaining in Game 5, Butler drove baseline alongside Markieff Morris, spun and drilled a gorgeous fadeaway jumper. Miami needed every one of Butler’s 35 points, 12 rebounds and 11 assists as the Heat stalled LeBron & Company’s title hopes.

In a flash of purple and gold, LeBron James was back rising above the rest. The rarely stationary James found a seam in the Miami defense, collected a bounce pass from Rajon Rondo and double-clutch dunked in the 4th quarter of Game 1. Just a kid from Akron, Ohio, seemingly always seeking his respect, made another career Moment in The Finals.

The determination of Giannis Antetokounmpo is undeniable. Persevering through injury, he never let indecisiveness sink in early in the Finals in a deficit against the Suns. This Moment in the paint in Game 6 shows his never-ending resolve. Antetokounmpo jostled for position and slammed over three defenders in traffic. Through his length, his versatility and his drive, Giannis recorded a 50-point performance for his first Larry O’Brien and Finals MVP trophy.

Devin Booker set the tone in the first game of his first Finals appearance. Denying him from scoring was going to take a herculean effort. Even then, it might not be enough. Booker made a superstar-level play when he shook past veteran P.J. Tucker, and flipped up an acrobatic lefty layup to erupt the crowd in the Footprint Center. It was an elite, “I’ve arrived” Moment for Booker in a 27-point outing.

So who do you think will win it all? Vote in our Discord, Twitter or Instagram feeds over the next few days, and get your piece of NBA Finals history on June 23.