Behind the Moments: One On One With Orlando Magic Rookie Jalen Suggs 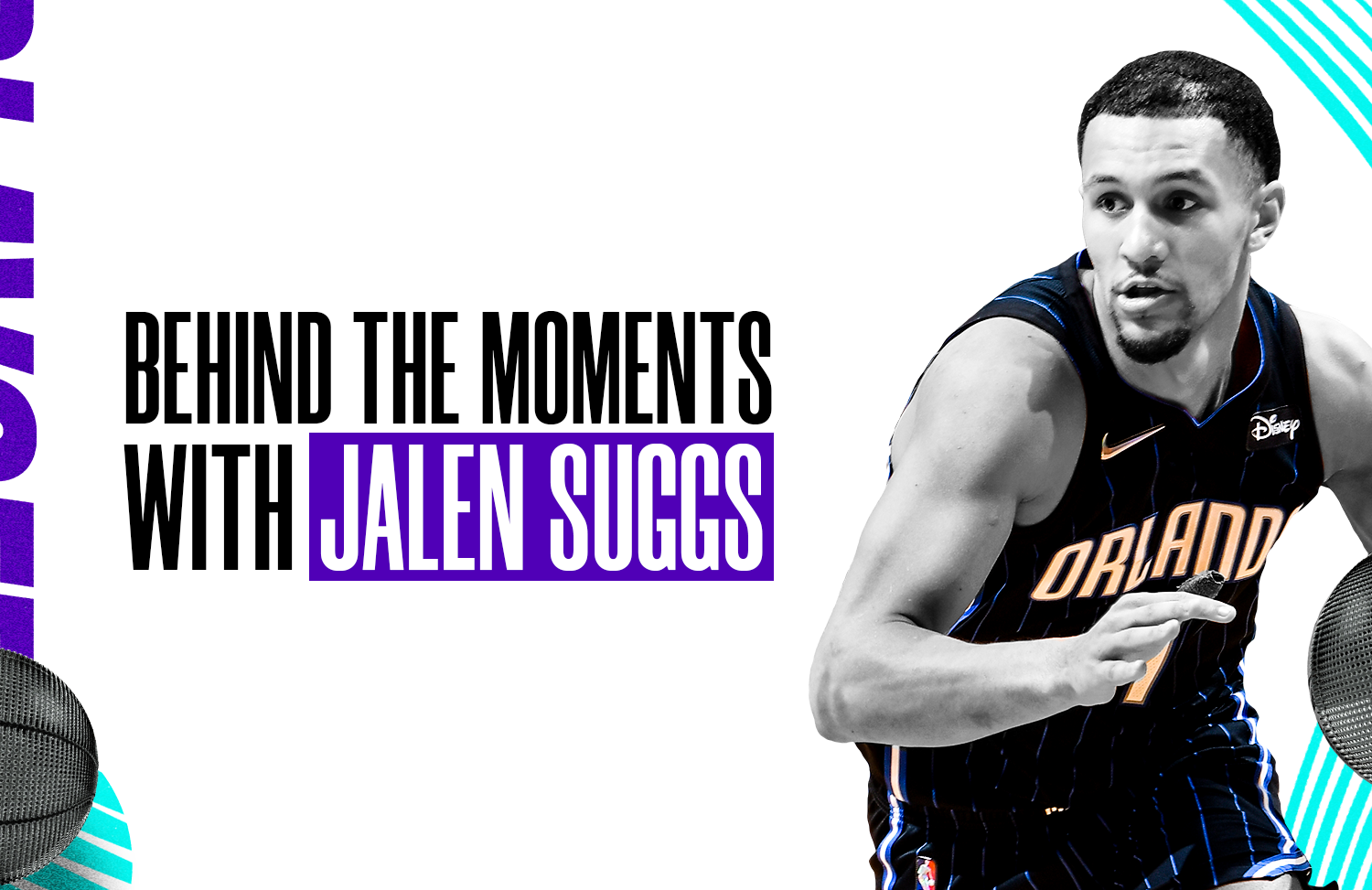 On the afternoon of Thursday, March 31st, NBA Top Shot’s Brandon Sowle sat down with Orlando Magic rookie Jalen Suggs to talk about his first year in the NBA, the transition to the pros and some of his biggest dunks of the year. The conversation took place during the Extra Spice pack drop, where a new Jalen dunk, an alley-oop off the glass to himself, would be released in packs, and hours before a new Throwdowns Challenge would go live, in which Jalen Suggs’ first Rare Moment on NBA Top Shot would be earned by fans and collectors. ‍The interview below has been edited for clarity. Browse all of Jalen's Moments on NBA Top Shot here.

Thanks for being here, Jalen! Your rookie season is almost wrapped up. Tell me a little bit about the journey and how you’ll remember it. ‍

I think it’s really been a learning process, and a really important one, for me. Coming into the NBA, it’s a lot different than high school, AAU and college. The amount of traveling we do, the back-to-backs, the long road trips; not being home that much. It was all just different than what I’d been used to.

As a player, I’ve grown a lot. I’ve gotten a lot better at understanding different situations and adapting to the game, and I think I’ve shown that as the season has progressed.

I learned a lot about myself, too, especially during times I’ve been hurt this year with my thumb, which has kept me out for a while. But being able to sit back, get a different point of view and perspective on things, and work on things that may have been pushed to the side before the injury has been important. I’ve loved every part about it, and the team that we have.

I’m excited for the offseason and for us to get better and come back next year and go to work.

Draft night. Take me through that. Your name is called by Commissioner Adam Silver. With the 5th pick in the draft, the Orlando Magic select Jalen Suggs. What are your emotions like at that moment?

It was crazy. A lot of it was relief. Joy. My mom did a good job holding back her tears. I knew I was getting picked by the Magic a few minutes before it happened, so I had some time to process it, but once my sister started crying it really hit home. Just seeing how proud everyone in my family was for me.

Seeing how excited they were made it all worth it, because they’ve sacrificed so much to help me get to this point. To be able to share that with them meant the world to me. That was a rollercoaster of emotions that night. One that I’ll never forget.

Speaking of Special Moments, your first game in the league is memorialized by Top Shot in your Top Shot Debut, voted on by your fans. Talk about your relationship with Magic fans so far as a rookie and how Top Shot can bring you closer to your fans?

I love the fans here. They’ve been with us all year. They’ve come out and shown love and as the season’s progressed, their energy has picked up as well.

At the beginning of the year we were trying to change the culture, and now we’re hearing Magic chants and the fans rallying behind us, which helps and makes us want to play that much harder and better.

Being able to share the moments on the floor with my fans through Top Shot, whether they were in the crowd that night or watching the game on TV, and being able to connect in that way with what I’m doing on the basketball court, is special.

The fans give me energy and it’s something I feed off, so I love the Magic crowd.

‍What was your “Welcome to the NBA” Moment?

My Welcome to the NBA Moment was when Kevin Durant came to Orlando in November. He was like 11/12 with 30 points, so efficient and easy – the most “didn’t break a sweat” buckets ever – it was crazy. There was nothing we could do about it.

You could play great defense, it didn’t matter. We just had to hope he didn’t hit the shot.

It happened early in the season and that’s when I was like “okay some nights it doesn't matter how good defense you’re playing, these are the best players in the world.”

On a night like that, what are you thinking about after the game? What can you learn from a head-to-head experience against KD?

It forces you to keep coming up with different ways to throw players off their game and get crafty on defense, but at the end of the day, sometimes there’s nothing you can do when you’re going up against the best players in the world like that.

You have to try and make up for it by doing the little things that don’t always show up in the stat sheet and the things that aren’t always scoring more – whether that’s rebounding more, controlling the pace of the game – things that can help us still come out on top despite an amazing single performance.

After the game, it was one of those feelings when we all looked at each other and knew we didn’t play bad, just that there was nothing we could do to stop him.

‍It’s your Throwdowns Moment on NBA Top Shot. The dunk on DeMar DeRozan. I know that had to feel good. You split the defense and get to the rim. DeMar is in your way, but it doesn’t matter. You throw it down. How does that feel in the moment? Where does that fit on the Jalen Suggs Dunk Power Rankings?

Oh man, look, I haven’t dunked on somebody for so long before that.

It was crazy, because a couple games before I was thinking to myself that I haven’t dunked on anybody in a minute. I was joking around with RJ Hampton about how I was starting to forget what it felt like to do that, so the fact that this happened a couple of days later was crazy.

That Moment was so much fun. The atmosphere that night was great. Big time crowd. Bunch of Bulls fans. Bunch of Magic fans. They were going back and forth, the game was going back and forth, and DeMar was having a great night. It was another one of those nights where you can’t do anything to stop him — I think he had 44, hitting tough shot after tough shot, but once that dunk happened, it was kind of a changing in the tide, and we went on a run and ended up winning that game.

In the moment, all I could remember was a group of Chicago Bulls fans right behind our basket, and I had to let them know that y’all are in Orlando, this isn’t Chicago. This is the Magic City, home of the Orlando Magic. That’s where my head instantly went. That was a fun night for sure.

You had two big dunks that game. At Top Shot, we had to decide which one we liked better, and this is definitely one of the best dunks of the year, which is why it’s in Throwdowns. Another one of your dunks and iconic moments of the season is in our new Extra Spice set. You throw a sick assist, off the glass, to yourself, and throw it down. What leads to that decision? How do you come up with that on the spot?

Once I stole it and saw there was nobody ahead of me, I knew I was throwing it off the glass.

I’ve done a 360 already. I hadn’t broken out the windmill yet, but off-the-glass used to be my staple in high school. I love that dunk. Is it frowned upon? Maybe, but that’s what makes me who I am – I’m always gonna be myself regardless and that’s just part of the competitor in me.

I remember after the game talking to our coach and he said that’s what ignited us and got our swagger going. That was a game against the Houston Rockets, and after that happened we went on and made a run and ended up winning that basketball game. When I'm in there, I’m gonna have fun and be myself and do what I can to impact the game, but yea, I knew I was going off the glass as soon as I got the steal.

‍We spoke to your teammate Cole Anthony at the NBA All-Star events and he told us he bought every rookie on the team a new suit. What suit did he buy you, and does it have any special significance or story behind it?

Franz Wagner and I went and had custom made suits earlier this season - we got to pick the material and color and everything. I like mine, I think it’s pretty fire. This summer, before the draft, I became a pretty big suit guy and got really into the business casual look. I got my suit game up, got a bunch of nice collared tees and loafers, and for about a month straight, every day, I was wearing business casual and really feeling it. Thought I would rock a new suit for every game, and it just didn’t turn out that way. I started rocking hoodies, sweatpants, and team jogging suits all the time. But it was really fun to go shopping with Cole and Franz.

I don’t know. Maybe. We’ll have to see about that. If the opportunity came…

I’m a big “why not?” guy. If the opportunity to be in the Dunk Contest presented itself and I was asked, I see myself getting in there one time, at least.

Your fellow Bulldog, Chet Holmgren, is very likely a high pick in this next draft. What advice would you give him about making the transition to the NBA?

Get ready to be uncomfortable. You’re gonna learn to get comfortable in those situations, but it's a totally different ball game than what you’ve been used to and what you’re accustomed to.

It’s a good thing, though. Once you get used to it and comfortable in it, you’re going to shine.

But that’s the biggest piece of advice – it’s all different. Everything is gonna change. Basketball, life, finances. All of that changes in the blink of an eye, and it comes fast.

Be ready for that, and know that I’ve got you and you’ve got me in your corner every day of the week.