Count It: The WNBA is now on Top Shot 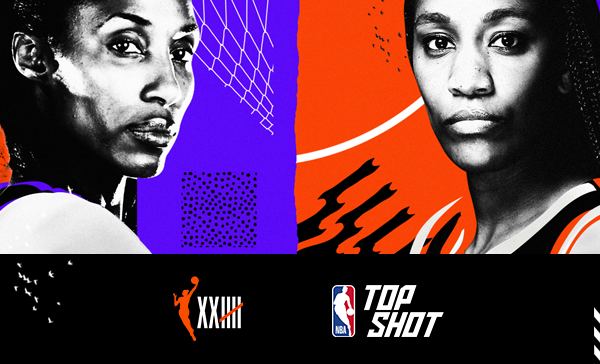 25 years ago, the game changed.

Over the next 25 years, the game changed the world, too.

The W has given girls around the world a chance to dream. Its impact has stretched way beyond the court. And it’s provided some of the biggest Moments in sports and culture since it launched in the summer of 1996.

And on Friday, in a groundbreaking first appearance on the platform, the WNBA’s coming to Top Shot, where fans can get a chance to own the WNBA Moments they love.

Click here to find out more about Top Shot, the currency of basketball fans >>

The first-ever WNBA packs drop on Friday, debuting Moments from superstars like Diana Taurasi, Candace Parker, Sue Bird and Breanna Stewart, to name a few -- not to mention some of the next generation of rising stars in the W.

‍
Before history’s made, and before you get a chance to tweet your first-ever #WNBATOPSHOTTHIS -- here’s what you gotta know.

The first WNBA packs are just 2 days away, with the landmark drop scheduled for 11am PDT / 2pm EDT on Friday.

New to Top Shot and packs? Packs contain a random assortment of epic Moments and are a main attraction to the Top Shot experience. Common packs are our most accessibly priced (compared to Rare & Legendary), making them a perfect way to start your collection.

And to launch the W, we wanted to make these game-changing Moments available to the biggest W fans around.

How Will The Drop Work?

First off, if you haven’t ever experienced a Top Shot pack drop, get ready.

For so many (really, so so many) of us, there’s nothing like ripping open a pack. And if you’re new to Top Shot, Friday’s gonna be one of your first chances to pull a magic Moment.

Featuring some of the top plays from the first half of the 2021 WNBA season, Friday’s drop features 25 different Moments from stars on all 12 WNBA teams -- with 3 Moments per pack.

Often with Top Shot drops, we have more collectors in line for a pack than we have packs available. We’re expecting Friday to be the same, so make sure to show up to the Queue a little early to maximize your chances of landing a pack.

To help WNBA fans get their best shot of scoring a pack, we’re breaking the drop into two different Queues -- the General Queue at 1pm PDT and the Priority Queue at 11am PDT.

You’ll be guaranteed to get a pack if you’re in the Priority Queue. To guarantee access you’ll need to have one Common A’ja Wilson Moments in your collection by the time the drop starts on Friday. These Moments will be gifted to some new WNBA fans who join the Top Shot community this week.

Weren’t able to claim the A'ja Wilson Moment? Hit the Marketplace to get yours. Or, test your luck in the General Queue where there’ll be more than 50,000 more packs available.

Already Have a Collection?

You’ll still be able to access the General Queue on Friday, with packs dropping for $9 a pop.

As if the deal wasn’t enough, you should know that owning at least one WNBA Moment by Monday, August 30th, at 9 am PDT will earn you a Fandom tier WNBA Moment in the following days..

What Else Is On The Way?

Our first WNBA Showcase Challenge is also hitting the site on Friday. Want to collect A’ja Wilson’s first scoring Moment on Top Shot? To get it, you’ll simply need to add any 5 WNBA Moments to a Showcase after the drop.

(If none of that made sense, the 101 on Showcase Challenges are interactive mini-games to earn never-to-be-sold-in-packs Moments.

For the veteran Top Shot collectors, please note that there won’t be traditional Challenges for this set, though you can safely expect more Showcase Challenges.

Once you’ve completed the Showcase, you’ll unlock a sweet A’ja Wilson spin-cycle and layup against the overmatched defender.

Anything Else To Know About?

With less than a month left in the WNBA regular season, there’s a lot of greatness still on the way -- both on the court and in Top Shot.

To celebrate 25 years of the W, our second WNBA drop will come with some of the best Moments in the quarter-century history of the league. A rare drop bursting with history and Hall of Famers, these packs will make waves.

After that, a second Common drop will round out our selection of some of the biggest Moments from the regular W season.

And to wrap up this historic year, the top plays from this year’s WNBA postseason will find their way into the first-ever WNBA legendary drop, celebrating greatness under the brightest playoff lights.