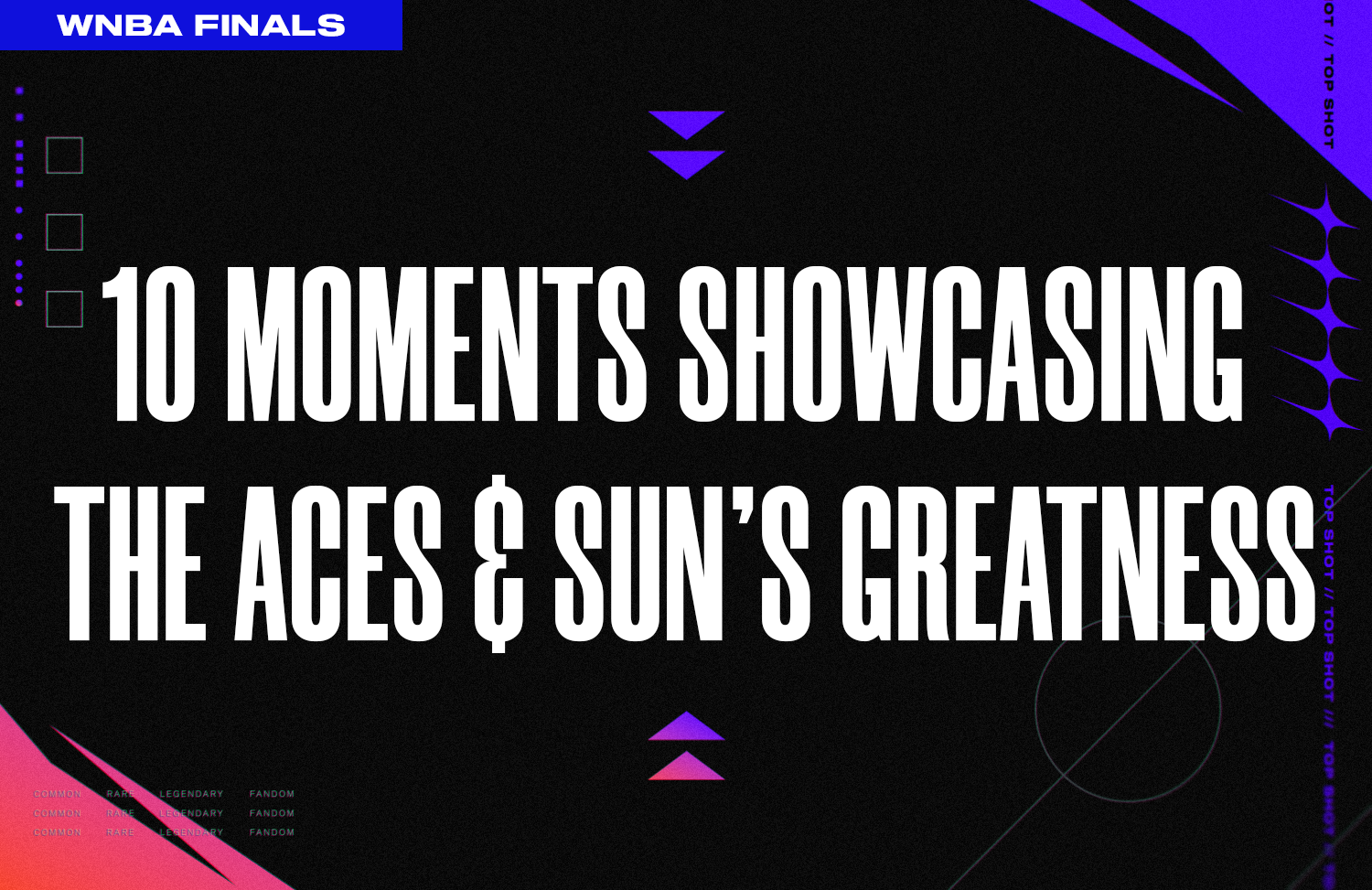 I couldn't help but crack a smile while reading about the way Connecticut Sun star Alyssa Thomas described her team during her inspirational piece for The Players Tribune last month. In her eyes, one of the aspects that makes this year’s Sun group transcendent is that they can send out a lineup of five All-Star caliber players, all individually capable of running off a 20-point performance. They’re also unselfish enough and smart enough to know their attack is more potent when the spotlight is passed from player to player.

Guess who that just as accurately describes.

There are measurable differences about these two WNBA Finals representatives.

The Aces are the No. 1 offense with the No. 1 pace, and an average-level defense.

The Sun are a top-two defense and offense with an average-level, sixth-ranked pace.

Similarly though, if there was something to be won during the 2022 campaign, one of these two teams went out and snatched it.

The newly-crowned Most Valuable Player, A’ja Wilson is close to putting a cap on one of the greatest single-season masterpieces of all-time; she could become one of only two players ever to win MVP, Defensive Player of the Year, and the WNBA title in the same year. Last year’s league MVP, Jonquel Jones is on the grandest stage too, seeking to add to her expansive trophy case.

The Aces also bring along the Coach of the Year, the Most Improved Player of the Year in Jackie Young, the third-place MVP finisher in Kelsey Plum, and arguably the WNBA’s most-feared assassin in Chelsea Gray. In return, the Sun boast a top-four MVP finalist in Thomas, and this year’s Sixth Woman of the Year in Brionna Jones. And that goes without mentioning the number of game-changing role players also involved.

Ironically enough, the only thing these two franchises don’t have is a WNBA championship.

With the Game 2 tip-off only hours away, we're going to tell the story of the Sun and Aces’ seasons through some of their best Moments on Top Shot. Here are the 10 that attempt to do it justice:

There’s a reason why there have only been four players in WNBA history —  including Wilson —  to win league MVP and Defensive Player of the Year in the same season. Such a milestone requires a combination of competitive grit, versatility, and endless energy.

Wilson’s Series 4 MGLE Moment puts to tape what opponents have had to deal with all season long. No layup attempt or pass attempt comes easy with No. 22 patrolling; only one player tallied 50 steals and 50 blocks this season, and you can probably guess who that was ... yup, Wilson. She's also one of just three players to average 20 PPG this postseason.

But what’s taken Wilson from merely great to Hall of Fame-caliber is her boundless stamina on both ends. Never one to take a play off, Wilson played 161 of a possible 165 minutes in the Storm series. The Aces will need that one-of-a-kind endurance once more against a bruising Sun defense.

There might not be a more unenviable position to be in right now than having to defend Chelsea Gray with the game on the line. In producing perhaps the greatest shooting postseason in WNBA history, Gray has shown defenders a little bit of everything, from hesitations, to off-balanced, audacious pull-ups … everything but mercy.

Gray has lacked fear in must-score situations. This postseason, she leads the entire WNBA in points per play (1.32), and — brace yourself for these numbers —  is currently averaging 24.0 points and 7.7 assists on 62.6 percent from the field, 59.5 percent from 3-point range, and 88.9 percent from the charity stripe.

Earlier this year, Plum had a cold-blooded bounce pass in transition that sliced through the entire city of Connecticut and into the hands of Dearica Hamby. That could work if you wanted to tell the story of how skilled of a passer she’s become. But, the things she’s able to do as a scorer simply can’t be overlooked.

Plum’s Base Set Series 4 Moment captures a little bit of everything. With a handle tight enough to dribble through a car wash without getting wet, the silky-smooth guard has a counter for every defense. This bucket was also one of many in Plum’s 4th-quarter takeover against the Sparks. In 2022, Plum was No. 4 in fourth quarter points (160), remarkable in how often the Aces already held leads.

Plum won’t step on many floors in which she isn’t the fastest or most-conditioned athlete, but there’s always a controlled hurry to her play. The Aces play at the WNBA’s No. 1 pace, and maximize that with the third-lowest turnover rate in league history, and the 2022 All-Star MVP is a key reason why.

Once upon a time, defenses would be content with allowing Jackie Young with a shot outside of the paint, because of how proficient she was at the rim. This year, the first-time All-Star has made one message clear: you’ll have to fear her from everywhere on the court.

Young certainly had the respect of the Seattle Storm’s defense on this play, getting her matchup to bite on her go-to, dribble pull-up before changing her mind and going hesitation on the way to the basket.

The two-way Aces guard knows three speeds very well: fast, very fast, and right past you, and she used them to fuel a career year from 3-point range (43.1 percent), along with 89 fast break points (6th among the WNBA’s guards) and 196 points in the paint (also 6th).

The comfort level from every area of the floor stands out. Young finished 6th in points in the paint among guards (196), 6th in fast break points (89), shot a career-high 43.1 percent from 3-point range (on 3.4 attempts), and still hit 49.5 percent of her 2-point attempts. Simply put, few are more talented.

WNBA award voters showed Alyssa Thomas serious respect, as she finished 2nd-place in Defensive Player of the Year voting and a 4th-place in MVP voting. Even that might not properly indicate how marvelous she’s been.

Fighting off torn labrums in both shoulders and an Achilles tendon tear over the last two calendar years, Thomas continues to churn out brilliant play after brilliant play. A few of her best traits — defensive moxie, a do-it-all mentality, and unselfishness —  were all on display during her defense-to-offense play against the Lynx.

Earlier this year, Thomas recorded the Sun’s first triple-double in their 23-year history … and then went and broke that record with a second triple-double just 10 days later. She’ll keep scorekeepers busy during the 2022 WNBA Finals.

Put simply, the tallest players on the floor don’t typically work their magic along the perimeter. But, such a trait is what makes Jonquel Jones one of the most unique scorers to ever step foot on the WNBA hardwood.

Undoubtedly, Jones was one of those players Thomas was talking about when discussing teammates who could easily average 20, but sacrifice for the good of the team.

The league’s MVP in 2021, Jones scaled her shot attempts back to just 10.4 attempts per game this year, but remained a top-20 scorer for one reason: efficiency. Of the 48 players to average double-digit scoring, Jones’ field-goal percentage (51.3) ranked eighth. The silky-smooth turnaround you see in the above play? Jones made them count, on the way to another All-Star season.

As the only player in the 2022 WNBA Finals with multiple championships on her résumé, DeWanna Bonner’s big-game pedigree and bucket-getting abilities are the types of traits that can shift a series altogether.

Few plays articulate Bonner’s score-over-whomever expertise quite like her Best of 2021 Moment, where she works a crossover and hesitation combo before pivoting into a fadeaway midrange shot in heavy traffic.

Great offense always beats great defense, and against the top-ranked Aces offense, the Sun will need it consistently. Fortunately, few bring it better than Bonner; in WNBA history, only five players have ever scored more postseason points (910), and before the Finals, she averaged 16.3 points per game in her last six meetings against the Aces.

Stopping the defending-champions’ quest for a repeat wasn’t an easy feat for the Sun, but they did one thing that gave them a fighting chance: they stopped the Sky’s No. 1-ranked points in the paint attack, which fell from 42.1 in the regular season to just 31.2 during the five-game series.

That simply doesn’t happen without an assembly of elite team defenders. The Sun's defenders provide a level of size and physicality that prove too difficult for much of the WNBA to match. Among the catalysts: two-time All-Star and 2021 All-Defensive Second Team leader Brionna Jones.

Never a heavy shot-blocker, Jones is intelligent and impactful on the defensive end, perfectly synchronizing her 6-foot-3 frame with that of Jonquel Jones (6-foot-6), Bonner (6-foot-4) and Thomas (6-foot-2). The size matchups could be the deciding factor in this series, and Jones’ ability to rotate and make plays like this represent a potential plus for Connecticut.

When she gets into her groove, it can seem as though DiJonai Carrington is playing at a different speed than everyone else on the floor. A nonstop jolt of energy on both ends, it’s easy to consider Carrington as one of the potential hidden factors that could decide this series.

Carrington’s playing time can be spotty, but when her number's called, you can expect to see plays like the one above. Mixing relentless, active passion on defense and the body control and fearlessness in getting to her spots on offense, the second-year guard simply makes winning plays, and the Sun’s +7.8 net rating per 100 possessions in the Playoffs proves as such.

The key will be finding time for her to contribute. In both the regular season and postseason, Connecticut is a whopping 13-2 when she plays at least 18 minutes, compared to 17-12 when she plays under that amount.