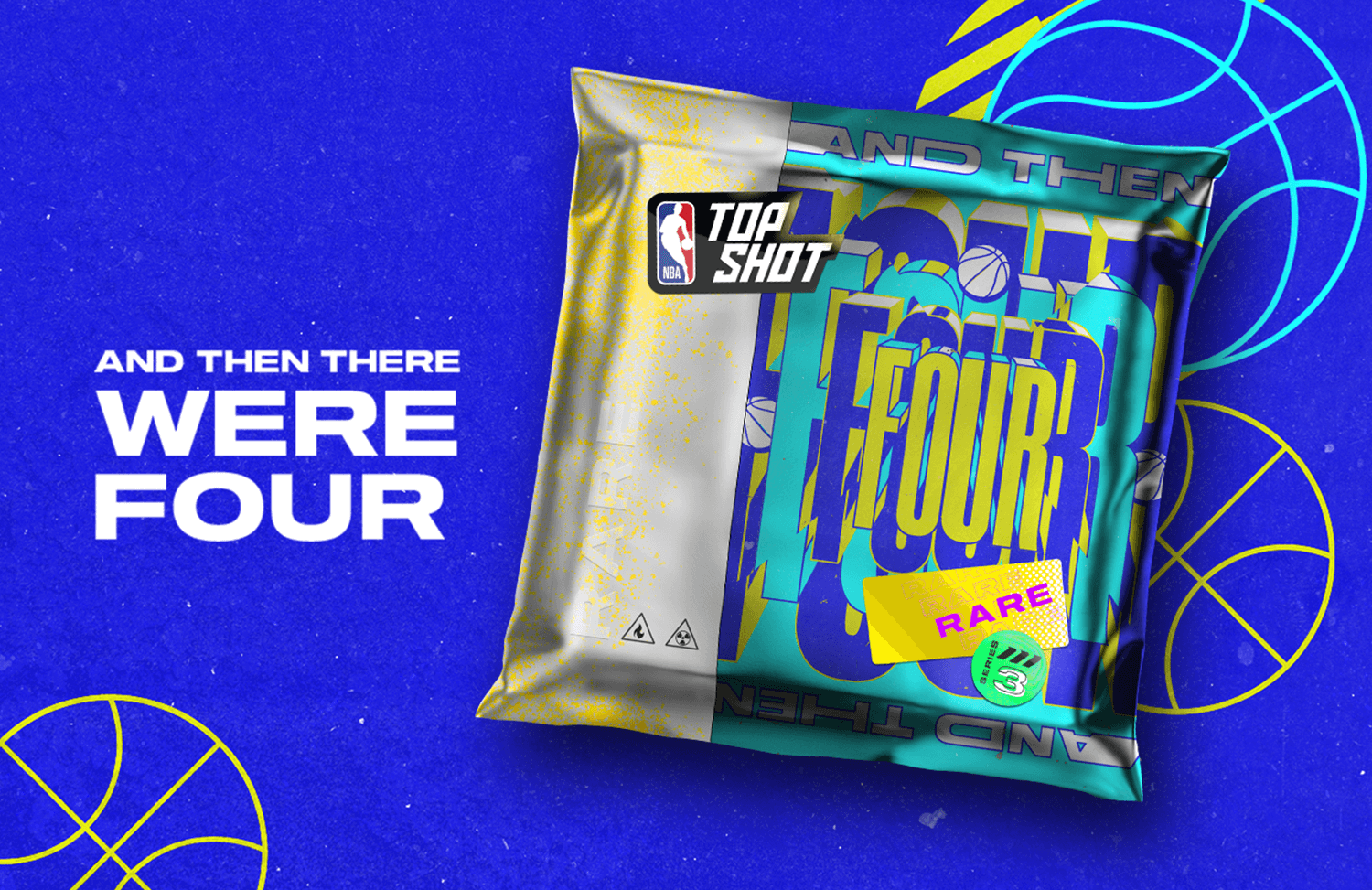 The 2022 NBA Finals are set. The Golden State Warriors will go head-to-head with the Boston Celtics for the Larry O'Brien Championship Trophy, with NBA Top Shot collectors in attendance at every game to witness history being written.

The story of the Eastern and Western Conference Finals has been documented throughout the 2022 NBA Playoffs as Moment NFTs on NBA Top Shot — this week, the defining chapter of their journey will be told. Here are the details for this week’s rare and common pack drops, and the players whose outstanding performances helped their teams reach the game’s biggest stage.

And Then There Were Four (Rare) » VISIT THE PACKS PAGE

With these details squared away, it's time to dive deep into the NBA stars and role players who enriched their legacy and stepped into the spotlight during the Conference Finals.

In Game 2, Curry held off a Dallas comeback by attacking the rim and finishing with expert-level touch in the 4th quarter. With just over 2 minutes to go, he slipped past Reggie Bullock and finished an up-and-under layup through contact.

This Moment in the “And Then There Were 4” set electrified the Chase Center crowd and teammate Klay Thompson.

Curry kept up the pressure in a pivotal Game 3 for the Mavericks in Dallas. Coming from a 2nd-quarter flurry, he found space in the corner in front of the Warriors’ bench, put up a quick-trigger 3, and in vintage Curry style, turned around before the ball went through the net.

Battling through various bumps and bruises, Kyle Lowry left everything he had on the floor for the Heat. In Game 3 against Boston, in which Jimmy Butler missed the second half due to knee inflammation, Lowry’s leadership was on full display.

He didn’t take a play off, including a Moment from the “2022 NBA Playoffs: Conference Finals” common set, where he jumped an inbounds pass for a steal and dropped off a quick assist to Max Strus to keep Miami ahead.

Despite the Game 1 loss, Daniel Theis made his presence against Miami known. Rotating in at the center position for Al Horford and Robert Williams III, Theis put in quality minutes.

In a “2022 NBA Playoffs: Conference Finals” Moment to remember from the Playoffs, he went head-to-head against Miami’s Dewayne Dedmon at the rim. After shading towards Tyler Herro, Theis turned and elevated with one hand for a monster stuff on Dedmon’s dunk attempt.

Luka Dončić’s previous career Playoff matchups were against the Clippers in the first round, each resulting in an early exit. This year, it was time for a leap. By making his first Conference Finals appearance, Dončić confirmed his arrival to modern superstardom.

After dropping Games 1 & 2 vs. the Warriors, Dončić went into Game 3 on a mission. Seconds before the first quarter ended, he dribbled behind his back in transition, spun around a sprawling defender and squared up for a deep triple. The shot dropped as the buzzer sounded, and Dončić made the Moment even more memorable with a shimmy celebration.

Later in the series, during Game 5, Dončić drove past fellow native European Nemanja Bjelica, and in Luka fashion, threw up a leaning floater from nearly out of bounds. The Moment wasn’t enough to steal a second win in the series, but Dončić’s 32.0 ppg, 9.2 reb and 6.0 ast was an admirable series stat line.

When Jaylen Brown takes off, it’s best to get out of the way.

With the Celtics rolling in a lopsided Game 5, Brown saw the perfect opportunity to put down his personal exclamation point.

He took advantage of a sliver of space around a screen, accelerated past the free throw line and his “And Then There Were 4” Moment was born. Miami’s Bam Adebayo was the only help defender around, but Brown was determined to throw down his one-handed flush. He sent the Celtics’ bench in a frenzy, and left the Heat crowd speechless.

Becoming a team’s No. 1 option is no seamless transition. Excelling as the primary target requires consistency, experience and a cold-blooded mentality. Jayson Tatum has evolved into a player who’s embraced the challenge.

Donning a purple armband honoring an NBA legend, Tatum was poised for a win-or-go-home opportunity. In crunch time of Game 7 against the Heat, all eyes were on Tatum with the ball. Isolated on the wing, he collected an inbounds pass with Jimmy Butler checking him.

Tatum spun out of his pivot and drilled a classic mid-range jumper before the shot clock expired. It’s a worthy “And Then There Were 4” Challenge Reward Moment for any devoted NBA Top Shot collector.

While watching highlights, it’s easy to get caught up in all the movement. The crossovers, the head fakes, the quick release, the poster dunk and so much more. Take a moment to look down, and you’ll see without proper footwork, spectacular plays would be much less common.

Jalen Brunson put on a footwork clinic in the Western Conference Finals. His steps were structured, but fluid. As the Mavericks cruised to the team’s lone series win in Game 4, Brunson taught rookie Jonathan Kuminga a lesson on tiptoeing around the lane.

In one  “And Then There Were 4” Moment, Brunson rushed to the paint, stepped back, pulled out a hesitation dribble, and floated to the basket for a quick two. He earned the label of Dallas’ second-best player.

Hold on to your ankles. We’re not just talking about the NBA’s Defensive Player of the Year, this is Marcus Smart, an offensive mover and shaker. En route to a near triple-double in Game 2 against Miami, Smart went into his bag at the top of the key.

He wobbled defender Max Strus with a dribble between the legs and drilled an easy pull-up. This Challenge Reward Moment from a terrific performance is available in the “2022 NBA Playoffs: Conference Finals” set.

White’s game is multi-faceted. As a combo guard, he can spot-up from deep, slash, work late in the shot clock – anything coach Ime Udoka needs. Keeping Miami defenders guessing, White caught nearby defenders off guard with a pump fake from the corner.

He drove, bumped into Kyle Lowry and floated in a shot, plus the foul. He flexed his way to a “2022 NBA Playoffs: Conference Finals” Moment in front of leader Jayson Tatum and the rest of the TD Garden crowd.

Kevon Looney is a Golden State stalwart. In Game 2 against the Mavericks, no one expected a career night from Looney, but that’s exactly what he pulled off. Looney’s feel for offensive rebound opportunities and dunker-spot chances fueled the Warriors.

He finished with an impactful double-double – a career-high 21 points and 12 rebounds. His “2022 NBA Playoffs: Conference Finals” Moment came when he was at the right place at the right time, of course, as he jammed a tenth of a second before the 3rd-quarter buzzer.

When Luka Dončić is at the helm of the offense, someone eventually needs to provide secondary creating and shot-making. Spencer Dinwiddie welcomed that task all Playoffs long.

In Game 4 at home, Dinwiddie forced Stephen Curry to work on the defensive end. In a “2022 NBA Playoffs: Conference Finals” Moment, Dinwiddle methodically dribbled between his legs, stepped back and knocked down a crucial 3-pointer over the soon-to-be WCF MVP.

You’ll struggle to find an advanced metric in the NBA’s database for “effort,” but it’s safe to assume, if it did exist, Draymond Green would be at the top of the leaderboard. In this defensive Moment in the “And Then There Were 4” set from Game 1, Green’s range is undeniable.

He went from helping in the paint on a Spencer Dinwiddie drive, to rotating all the way to the opposite corner to reject a Dorian Finney-Smith 3-point attempt. The Warriors are on a whole other level when Green applies his versatility.

Where did this version of Jordan Poole come from? His professional journey’s been far from linear.

While still in his dribbling combination, Poole picked up his handle and tossed a one-handed dime to the rolling Kevon Looney. It’s a Poole Party in The Bay.

Here’s the number: 141. That’s how many postseason games Al Horford, 35, has played in his career before making a Finals appearance. Now, after 15 seasons and 4 different franchises, Horford’s finally on the biggest stage.

He’s far from frail at the rim. Horford’s still the rim protector he’s been feared as his whole career. That didn’t stop the Heat from testing him in the paint. As you can see from this “And Then There Were 4” Moment though, Big Al was up for the challenge.

In Game 4, he swatted away Caleb Martin’s reverse layup, and in his jovial spirit, celebrated the denial with the Boston faithful.

Chances are you’ve seen it more than once already. Delighting any dunk-lover, Andrew Wiggins went all-in for a Slam of the Year candidate over Luka Dončić in Game 3.

The runway opened up and Wiggins didn’t look back. He mean-mugged all the way to the rim and threw down this ridiculous “And Then There Were 4” Challenge Reward Moment.

Wiggins looks as comfortable as ever on the court in a supporting role with Golden State. Against Dallas, he averaged 18.6 points per game and led the Warriors in minutes. He’s allowed his athleticism to flourish, snatching offensive rebounds, taking on the challenge of guarding the opposition’s best player and finding his spots in the mid-range. An impressive run for the former No. 1 overall pick.

Bam Adebayo can competently guard positions 1-through-5. In the series vs. Boston, he held his own in switches against Marcus Smart, Al Horford, Jayson Tatum, Derrick White and Jaylen Brown, who in Game 1, drove past Adebayo thinking he was free for a lay-in. Instead, wedgie incoming! Adebayo tracked the scoop layup and pressed it into the side of the rim for an “And Then There Were 4” Moment.

He’s got that “dawg” in him. Tenacity is the name of P.J. Tucker’s game and he brought it all series long against the Celtics. Tucker’s championship experience transferred to Miami and was initiated into a Top-5 defense in multiple categories during the regular season.

Always active on both ends, Tucker constantly swipes and strips away at the ball. In Game 3, not only did he swat Grant Williams at the rim, he also picked Jaylen Brown’s pocket following the swat.

This “2022 NBA Playoffs: Conference Finals” Moment encapsulates the drive Tucker plays with on a night-to-night basis, still, at 37 years old.

Jimmy Butler delivered exceptional performances night in and night out as the Miami Heat fought through their opponents. In a Game 1 victory during the Eastern Conference Finals, Butler's 41 point, 9 rebound, 5 assist, 4 steal and 3 block performance did it all. His Moment captures a rare occasion in the NBA and NBA Top Shot — back to back steals and buckets, representing offensive and defensive dominance, and "Heat Culture," all at once. You'll find this Moment in packs on June 3, along with the other stories captured from the Eastern and Western Conference Finals we've detailed here.

Enjoy the NBA Finals, and we'll see you on Friday, June 3, for this exciting pack drop.

This blog was updated at 2pm ET on June 2 to reflect a change from Jaylen Brown to Jayson Tatum as the ATTW4 Celtics Challenge Reward.