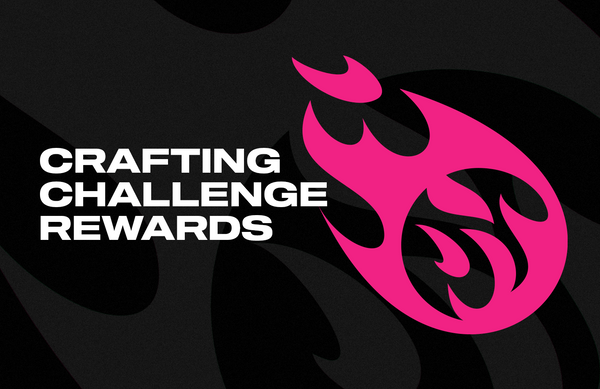 Applied to every edition of a NBA and WNBA Moment earned in Crafting Challenges, this flaming basketball makes it easier to identify and filter these Moments in your collection and in the Marketplace, and distinguish them from a traditional Set or Flash Challenge Reward.

To see this indicator in action, take a look at every Crafting Challenge Reward Moment in the Top Shot Marketplace here.

Crafting Challenges empower NBA Top Shot’s community to reduce the overall supply of Moments in our ecosystem while earning special rewards in the process.

To participate, you burn Moments from your collection to craft a new reward, permanently reducing the supply of each Top Shot Moment involved.

To brush up on Crafting, read about the introduction of this new feature or the launch of Squad Goals.

To participate in a Crafting Challenge, visit our Challenge HQ to see what’s live now.

To learn more about Crafting Challenges, join our team for a weekly Twitter Spaces each Tuesday at 8pm to dive deep into the world of crafting and burning.

This doesn’t include the over 348,381 Moments sent to the Locker Room in exchange for Trade Tickets since June 28, or the 30,037 Moments burned (26,427 Net Moment Reduction) from other NBA and WNBA Crafting Challenges that have taken place since the launch of Squad Goals.

Six Squad Goals challenges are in the books, with two more launching today — dedicated to amazing displays of teamwork for the Washington Wizards and Dallas Mavericks. Each Moment is a time capsule and tribute to a period in your favorite team’s history that’s unlikely to be repeated.

Here’s a look at every upcoming Squad Goals Challenge, in the order they’ll take place, along with the Crafting Challenge Rewards you can earn by participating and burning Moments from your collection.

During Squad Goals Summer, we’ll be spotlighting “Hidden Gem” Moments from every NBA team. Read every team’s Hidden Gems story here, and follow along as new editions are published.