Explaining the Series 2 Base Set 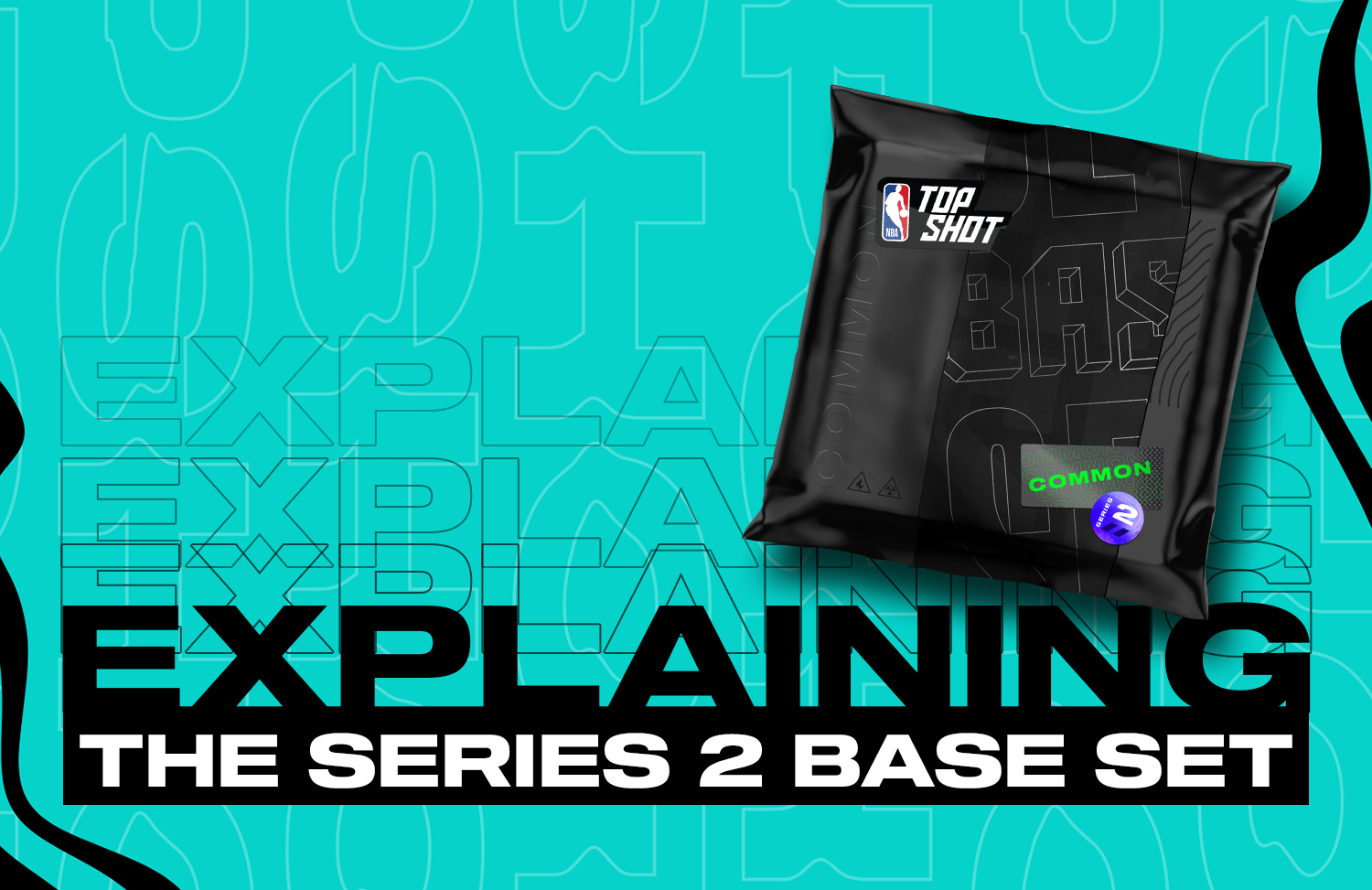 And Now for Something Completely Different

‍
Hope you've had your fill of the Series 2 Base Set Moments that we've released so far. We're about to mint a whole new batch of jaw-dropping Moments from players all across the Association. To make room for new plays from rookies, fan favorites and others who haven’t yet made it to NBA Top Shot, we're going to go ahead and retire *the entire Series 2 Base Set* to date at their current mint count and will be distributing most of those remaining Moments soon. Just. Like. That.

Once you catch your breath, let's take a step back and explain the Series 2 Base Set as a whole: Where we are, where we're going, and what you can expect.

So far, the Series 2 Base Set consists of 135 different plays from 125 different players who have played in the 2020-21 season. The majority of these plays have been minted to an Edition Size of 15,000. But what about the rest?

A total of 15 Moments feature rookies in their regular season debut game, minted during their rookie year. We like to call these "Three Star Rookies", and they'll be getting special badges as outlined in our Talkin' Bout Rookies blog post (check it out, if you haven't!). We wanted to help these rookies be directly comparable in the marketplace, so we made the decision early on to cap these Edition Sizes to ensure that even if we released more in the future, we'd be able to distribute the full run of them at the same Edition Size. This would mean that whether you were looking at the first Anthony Edwards, the first James Wiseman, or the first Immanuel Quickley, you'd be comparing the same badges and the same Edition Size. Then Top Shot kind of blew up and the 4,000 Edition Size where these ended up turned out to be laughably small for a Base Set Moment, but so it goes! Series 2 "Three Star Rookies" are just that much more special as a result.

Two plays featured players who got traded early in the season after they were already added to the Base Set. When a player is traded to a new team, we retire their Base Set Moment wherever the mint run happens to be. For these two players, Caris LeVert and Jarrett Allen, mint count was 5,000 at the time, so they're /5000 LE.

While we had a mint count around 7500, we identified some highlight-reel-heavy players where we knew we'd want to add new plays into the Base Set soon, so we retired those Moments at 7500 mints even as we minted more of the other plays from the set. Ten plays were therefore retired here, all of which featured players that would subsequently go on to be featured in new Moments in the Base Set.

We mentioned the "Three Star Rookies", but the rookie badge blog post referenced another upcoming badge that we intend to add to Moments eventually and that's a special badge to commemorate the first appearance for any player on NBA Top Shot. To help these stand out before these badges are formally implemented,, we retired all 25 such cases at an Edition Size of 12,000. (To answer one tangentially related frequently asked question: Kevin Durant's first play in NBA Top Shot was from his Run It Back 2013-14 appearance in Series 1, so his first Series 2 Moment won't get a first appearance badge.)

So while the badge could still be several months away from launching, keep an eye out for /12000 LE Series 2 Moments as a good indicator that it’s a player's first play in NBA Top Shot.

As for the 83 other plays currently in the Base Set, we'll be retiring those at a mint count of 15,000 and mostly distributing those in upcoming packs. Get 'em while you can!

While our plan had been to make as many Base Set packs available as you all wanted, it turned out that you all showed up in such large numbers and wanted so many of these packs that we ran into issues even dropping them in the first place, and our internal systems weren't quite scaled to the point where we could mint enough Moments to meet that demand. While none of this is yet perfect, we think we've gotten to a better place, so we want to start moving closer to the intended design of the Base Set. That means more Base Set packs more frequently, and it means being able to mint more Moments and increase CC counts as needed to keep up with release of Base Set packs for as long as people want them (while the season lasts—recall that Base Set Moments are essentially time-limited, so eventually all will be retired and the primary way for new collectors to obtain them will be through the Marketplace).

As of this blog post, we've got 135 plays to collect in the Base Set, but what will be taking their place now that we're retiring all of them? We'll be adding another 154 plays to the Base Set, from 154 different players, all following the same pattern that we started Series 2 with:

The Base Set will continue to grow as the season goes on.

Some players will likely be traded and see their existing active play in the Base Set retired.

Some players will continue to make so many highlight reel plays that we've just got to add more of them to the Base Set, and we'll retire any active play from that player when we do so (and we'll be sure to try to continue to fully distribute those retired Moments when we do so, unlike in Series 1).

Some new players will be introduced to Top Shot for the first time as part of the Series 2 Base Set. We plan to continue to release those Moments as /12000 LE mints to help you find them more easily.

Some previously seen players will be introduced to the Series 2 Base Set for the first time, and we'll likely start off by minting a fair amount of those as soon as they're introduced, while leaving them CC with room to grow.

We want the Base Set to represent a great diversity of players from all teams – we'll include as many players as we have a Top Shot-worthy Moment from, ideally!

We want the plays represented in the Base Set to represent a great diversity of collectible Moments, from significant milestones, to unexpected plays, to those thrilling statement performances. Some of the best and most memorable plays will continue to appear in the Base Set to ensure that everyone will have access to some of the best highlights that the NBA has to offer.

And finally, we'll continue to pull Moments at random for inclusion in each pack we release, so that the serial numbers available will include both high serial numbers and those coveted earliest mints.

We've got so much in store for the Base Set here in Series 2, and we're excited for you all to see what's coming right around the corner and over the course of the rest of the season. Good luck getting packs, and happy collecting.