Finals Quest Game 4: A Series Hangs in the Balance 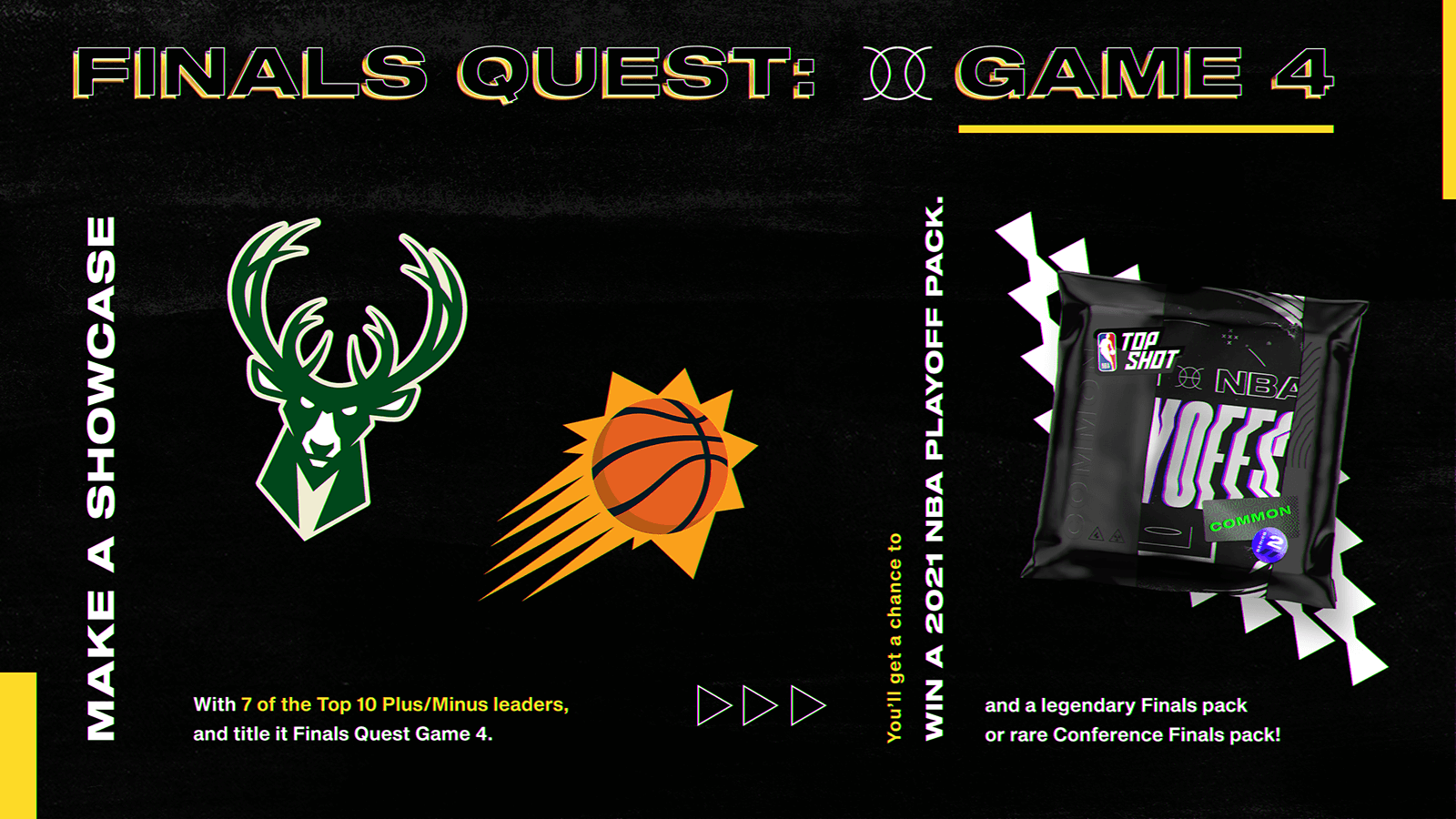 Congratulations to the 1000 Collectors who will be receiving a 2021 NBA Playoffs Pack.*

*Due to a mistake on our end, the Snapshot did not correctly account for P.J. Tucker Moments.To remedy this, we have taken a new snapshot, capturing everyone who had an eligible Showcase with a P.J. Tucker Moment in it. For this group of collectors, we have raffled another 500 Playoff Packs, and every collector in the list will get an entry to the Grand Prize drawing to win a legendary Finals Pack or rare Conference Finals pack.

NOTE: There was a tie for the 10th highest "Plus/Minus". For this Showcase Quest, only the players above will be eligible.

‍On Sunday, Giannis Antetokounmpo had another monstrous 40+ point effort, this time leading to the Bucks first win of the series. Now, a pivotal Game 4 is upon us.

Can the Suns take a commanding 3-1 series lead or will the Bucks even up the series heading back to the Valley?

For tonight’s Finals Quest Game 4, we’re highlighting players whose impact doesn’t always come in the form of points, rebounds, assists, but rather their overall impact on the team.

To get in the game tonight, you’ll still need to create a Showcase with exactly seven (7) Moments -- but this time you’ll need to feature players with the highest “Plus/Minus” from Game 4.

“Plus/Minus” is a stat that reflects how the team performed while a player was on the court, and is calculated by taking the difference in the score when the player is in the game and subtracting it from the score when the player is not in the game. For example: P.J. Tucker in Game 3 only scored 7 points and grabbed 3 rebounds, but was a major factor for the team with a “Plus/Minus” of +12, meaning the Bucks outscored the Suns by 12 points while he was on the court. (Plus/minus appears as “+/-” on most site’s box scores)

Below, find the exact details on how to get in on the action for Finals Quest Game 4.

So as long as you put exactly 7 Moments from 7 of the 10 players who led the Bucks & Suns Wednesday night in “Plus/Minus” in a Showcase, and name your Showcase Finals Quest Game 4 by Thursday, July 15th at 4:00 PM PDT, you’ll earn a chance at a 2021 NBA Playoffs Pack.

In addition to giving away 500 NBA Playoff Packs this game, there will also be an opportunity to earn a legendary NBA Finals pack or a rare Conference Finals pack.