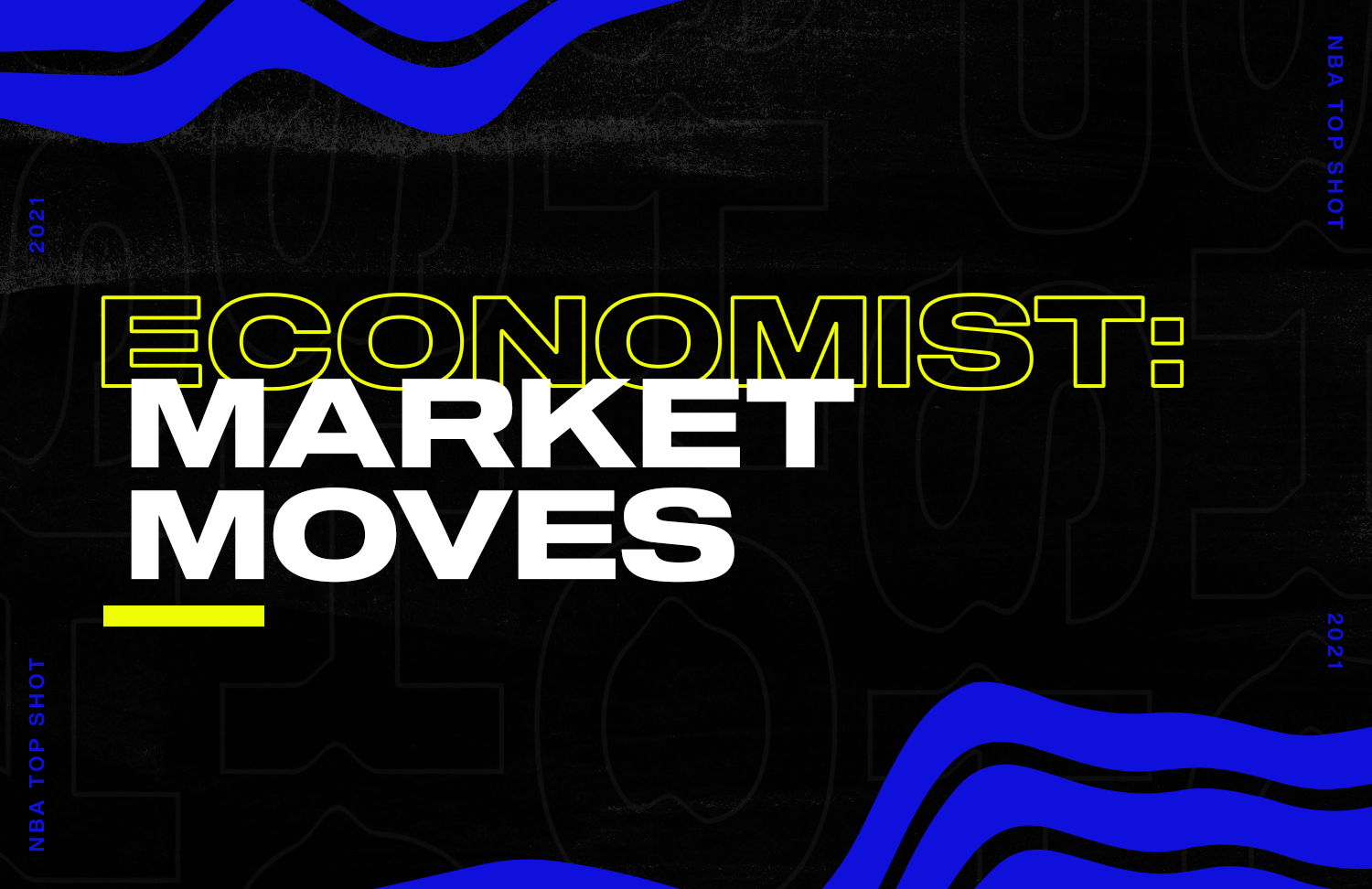 The Top Shot market has been trending steadily upwards for a few weeks now and has taken a sharper trajectory in the past several days.

But I’m not a hype man. I’m The Economist. And I am here to remind you that one of the most important things to remember in collecting is that the value of a collection is more than just the numbers on the screen.

When making purchase decisions remember to collect what you love and enjoy the strategies Top Shot has to offer around building your unique collection. Don’t lose sight of the sense of joy in collecting a specific rare Moment from your favorite player, wading through dozens of Moments from your favorite team to carefully select the final few pieces of your complete team set, or carefully plotting a strategy to collect the full set you are passionate about.

These moments of consequence in your journey as a collector matter every bit as much as the Moments themselves.

While this might seem like an odd start to an economic post, I believe that it is important that, at critical points in economic cycles, every collector take a step back and evaluate what they are looking for within their own Top Shot journey.

Oftentimes, when prices are lower, a collector might find themselves sitting on the sideline making a shopping list for what to buy during brighter days only to find themselves throwing the list out and seeing their entry prices in the rearview window once they gather the necessary confidence. Astute collectors often find themselves acting when others cast doubt and reaping the benefits at a later date.

As always, we encourage everyone to collect what you love and focus on what drives the most value to you -- whether that is the exclusivity of a Legendary Moment, the allure of a specific Rare set, the emotional connection to a team or player, the nostalgia of a Run It Back, the speculation of a rookie, or the uniqueness of a Top Shot Debut.

With that said, I would like to look at a few trends in the Marketplace over the past week.

Diving into the volume of teams over the past 2 weeks we notice some interesting trends.  While the past three days have produced a noticeable bump in activity for almost every team in the league there are several that stand out: the Hornets, Mavericks, Warriors and Lakers.

Looking deeper we notice that a significant amount of these teams’ volume is driven by their star players including in some cases specific Moments from those players. The Hornets and Mavericks have seen increased spending in LaMelo Ball and Luka Doncic Moments, specifically their Cool Cats, which offer a clear path for entry into the Nine Lives Lounge. The Warriors and Lakers bumps are more spread out among sets, but as expected are primarily driven by superstars Steph Curry and LeBron James.

Coming off their NBA Title, the Milwaukee Bucks have shown consistency and heavy volume across the entire 2 week timeframe examined here.

Segueing into our next topic, over half of the Thunder’s recent volume has come from a pattern of 5 sales in the Kevin Durant Run It Back Moment in a 3 day span:

As the experienced Top Shot collector may know, Run It Back is our flagship Rare set for historical Moments. In Series 1, this set came from the 2013-14 NBA Season and featured all-time greats such as Tim Duncan, Dirk Nowitzki, and a Giannis Antetokoumpo rookie. Given the extreme scarcity of the set (most Moments were minted to only 275 with Challenge Rewards being even smaller Edition Sizes) these Moments don’t change hands too often as many owners are unwilling to part with what is often the crown jewel of their collection.

Thus, we notice that data around this set is often quite noisy as a few key sales could alter the overall trajectory. However, here there is a clear week over week trend -- there has been renewed interest from buyers in this set this week and we have seen a higher volume of transactions than normal.

We will obviously be going back to historical footage in the current and future Series for more of the best plays from the biggest stars in history, but the Series 1 Run It Back from 2013-14 will forever remain the first ever Run It Back set.

Above is a chart showing the roughly doubling of volume on Top Shot Debut Moments week-over-week. For the uninitiated, a Top Shot Debut is any play that represents a player’s first play to be minted on the platform and is denoted by a badge on the Moment and in the Marketplace.

Alongside mostly higher prices for Series 1 Moments on the whole, the distinction that a lot of Top Shot Debuts come in Rare or Legendary tiers has contributed to significantly higher dollar volume in Series 1 Moments than Series 2 Moments. As you see visually in the graph above, that ratio has widened in the recent days as there has been an even more significant focus on Series 1 Top Shot Debuts on a relative basis despite an uptick in volume across the board.

Last, but certainly not least, I wanted to touch on what, for many of you, is the most exciting class of players -- rookies. The above chart represents the daily sales volume of rookies in our Marketplace. Flipping the Series 1 to Series 2 ratio on its head from the Top Shot Debut section above, one of the most noticeable aspects of the chart here is that most of the rookie volume is concentrated in Series 2. Series 2 brought us exciting players like LaMelo Ball, Anthony Edwards, and Tyrese Haliburton.

Rookies present an exciting opportunity as their place in the league is only beginning to take shape. Check out your favorite rookie in the Marketplace today.

Until next time, collect what you love, spend within your means, and keep the long view in your collector journey.

Continue to follow along at @TopShotEcon for more insights and analysis.