How Rare is an NBA Top Shot Moment™ Collectible? 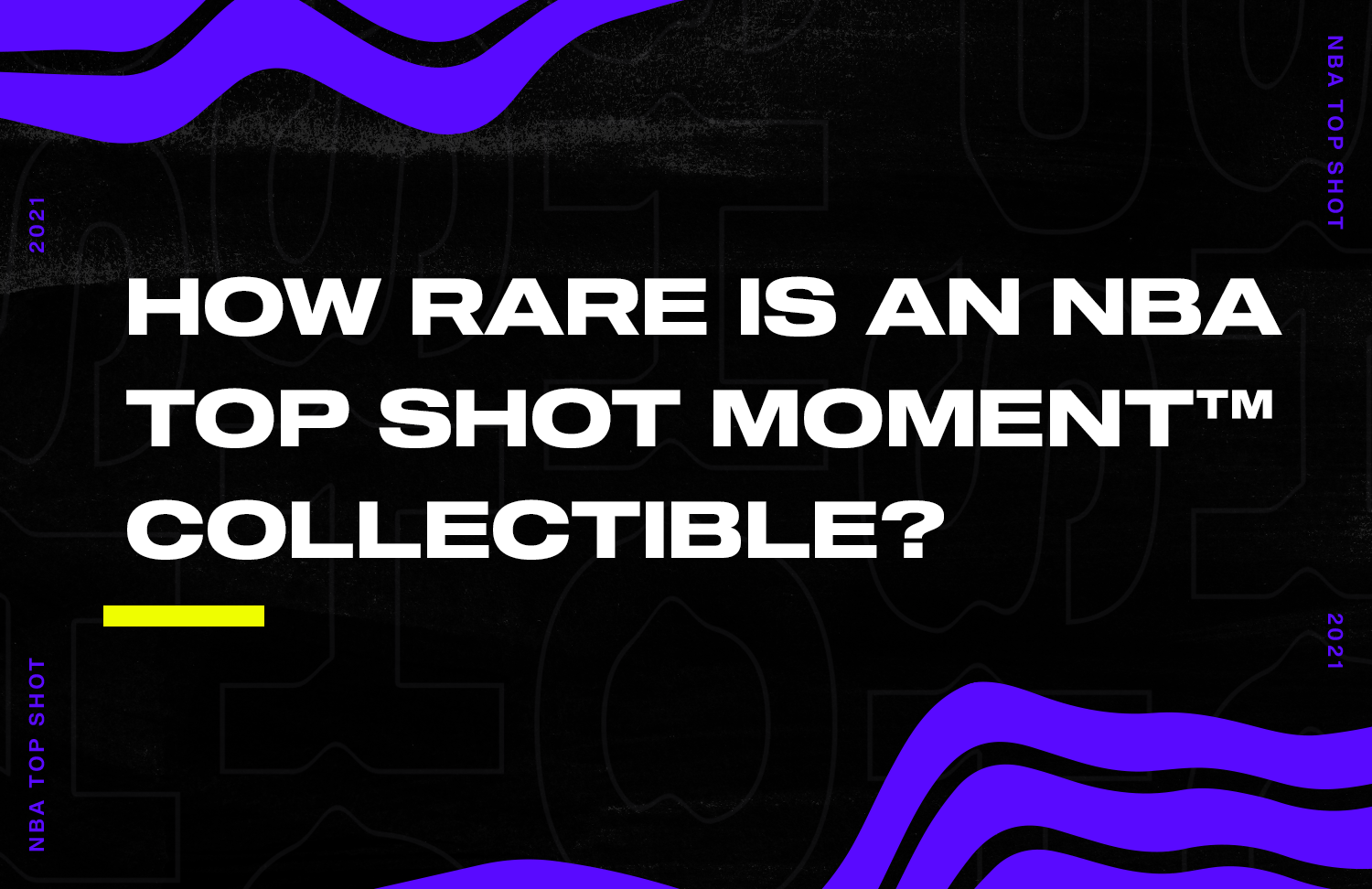 This week, the NBA will tip off its 75th Anniversary season, the Bucks will defend their crown, new rookies will aspire to become household names, hundreds of plays will come alive as NBA Top Shot Moments you can own, and we’ll get pumped for 1,230 games over the next seven months. The hoops world is about to take flight.

Before we start collecting our favorite Moments from the rarest Legendary to our favorite Common, we felt it’s the perfect time to reflect on what exactly makes a Moment so valuable.

It’s all about rarity.

Moments let you own an official piece of sports history in a finite number. A Moment is a connection to your favorite players and teams, to the league, and a proof of your fandom. For reference, here’s a handy comparison of how scarce our main tiers are.

Some collectors already own Legendary Moments with a minuscule number in circulation. Others collect as many jaw-dropping plays as they can in the accessible Common tier. Both journeys have their own unique experiences that revolve around rarity.

That’s why today we’d like to share the big picture vision for rarity in NBA Top Shot. As we head into Series 3 for the 2021-22 season, we’ll be sharing more big picture posts about the incredible drops and updates coming to your Top Shot experience.

An old adage in the NBA Top Shot community is that “Commons are meant to be common.” We want Common Moments to work a lot like basketball does -- as shared, collective experiences for fans across the world.

One example of a Common Moment is this Carmelo Anthony three-pointer, which moved him to 10th on the NBA’s all-time scoring list. It’s historically significant, and with 40,000 in circulation, is now owned by NBA fans around the world. This accessible piece of NBA history lets people rep their fandom.

But not all Common Moments are created equal. You’ll notice this Anthony Edwards Common layup is far rarer with just 4,000 ever made and features his debut game in the NBA and his Top Shot debut (as seen in those badges on the Moment), making it a valuable collector’s item.

Introduced in the summer of 2021, Fandom Moments are special collectibles with a varying level of rarity. They’re focused on special experiences like buying a Moment at a real-life game and drops for special events.

When it comes to rarity, there are only as many Fandom tier moments as there is demand. They’re a wildcard in the Top Shot ecosystem, with editions that are sometimes smaller than the Rare tier.

An example of the Fandom tier came in Las Vegas Summer League, where hundreds of collectors lined up each day to purchase a Moment from the games being played that day. Collectors loaded up on this Killian Hayes Assist with only 2,776 of that Moment ever created, exclusive to the fans at the arena.

The Fandom tier has room to grow and change. Stay tuned for more exciting experiments in Series 3.

Rare Moments on Top Shot are designed to be hard to come by. They often feature historic plays from NBA legends, and to get one, you’ll have to get lucky: the overwhelming demand for Rare packs leaves a lot of collectors out of luck.

An example of a Rare Moment is the iconic Trae Young shoulder shimmy three-pointer from the Eastern Conference Finals. This Moment is highly scarce with only 750 in circulation, but is slightly more accessible than the rarest tiers.

With hundreds of millions of basketball fans in the world, owning a Moment that can only be owned by the equivalent of one section of an arena is a major flex.

Legendary Moments take rarity to a whole new level. If Rares are the NBA Finals, Legendaries are Game 7.

Featuring only the best plays from the best players in NBA history, these Moments have Edition Sizes between the mid two-digits and the low three-digits, making them extremely coveted and special.

An example of a Legendary Moment is this legacy-defining block from Giannis Antetokounmpo in the NBA Finals. With only 120 of these in existence for arguably the most iconic play in recent memory, they’re ultra-rare and nearly impossible to obtain.

You’ll also spot some surprises in Series 3 including new Legendary sets that collectors will cherish on their digital mantle for years to come.

A Legendary Moment is a prized possession, and you should have full control over what you do with it, whether that’s choosing where to sell it, collateralizing it for a loan, or even fractionalizing it. The good news is that you can now move your Legendary Moments to non-custodial wallets.

On the horizon: Ultimates

Since NBA Top Shot kicked off one year ago, collectors have been able to own four tiers of NBA Top Shot Moments. From the accessible Common tier to the ultra-rare Legendary tier. As Top Shot grows, you can expect to see more from this new tier so you can add these precious Moments alongside your Legendaries.

How rare will Top Shot Moments be going forward?

Over the first two seasons of Top Shot, we’ve been able to see all types of collectors come through our doors. From savvy, seasoned collectors to die-hard team fans, there are a lot of Moments to pursue and ways to collect on Top Shot.

To improve the experience for all players, we’re committed to continuing our trend for a few key elements of Top Shot moving forward:

The number of Common Moments will continue to grow as the collector base grows.

Commons are meant to be collectible by fans of all types and a larger number gives more people a chance to own them. Whether you’re buying a pack or hunting down your favorite NBA play from a player’s rookie season, you’ll be able to find something special in the Common tier, and buy what you like in large numbers.

Rare and Legendary Moments are intentionally staying scarce. These are elite Moments meant to be owned by seasoned collectors. They’ll be released in small quantities, and to obtain one takes insight and strategy to build up your Top Shot Collector Score.

We hope this deep dive leaves you pumped for your next moves on Top Shot. Series 3 is going to be a series to remember, and we're excited to get it started soon. Until then, happy collecting!