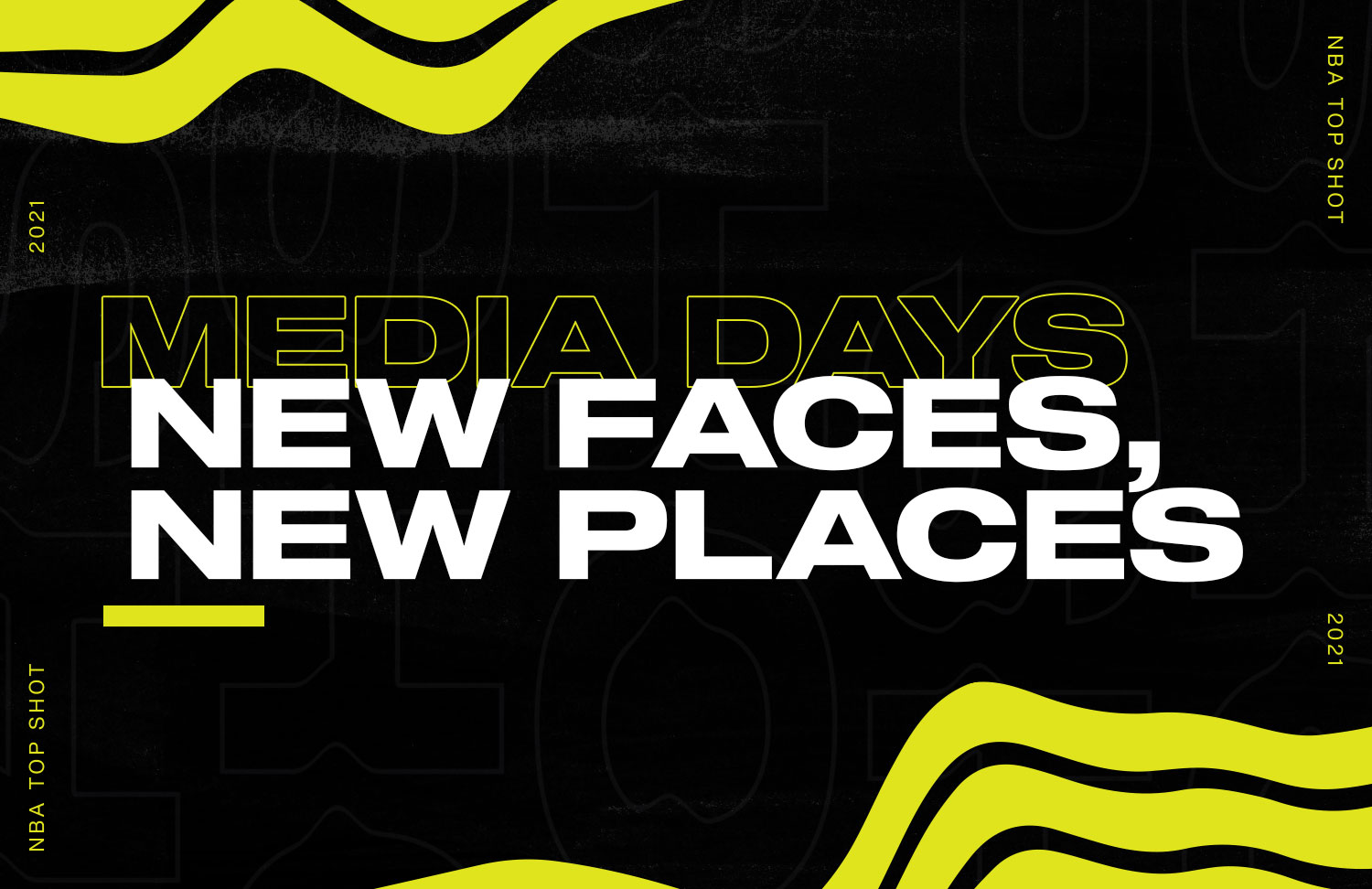 This is the media’s first chance to talk to all the players who have reported for pre-season camp -- and the first look at stars wearing brand-new threads after changing teams in the offseason.

There will be sound clips aplenty. This is when excitement for the new season really ramps up. The first pre-season game is next Sunday, October 3, when the Nets travel to Los Angeles to play the Lakers.

And to tip the season off, let’s take a quick look at some of the biggest off-season moves that landed familiar faces in new places -- and who are looking to have some Moments from new squads in 2021-22.

One of the offseason's biggest stories, Lowry made his way to Miami after 9 years in Toronto, where the 6-time All-Star won a title in 2019 and became one of the most beloved players in the history of the franchise.

Coming off an NBA championship with the Bucks as their standout defender, Tucker turns his sights toward another NBA title. After making the Finals two years ago, the Heat fell short last season. So naturally, they went out and added Kyle Lowry and Tucker. Those two will join all-star Jimmy Butler, Bam Adebayo and Duncan Robinson to round out a very formidable starting lineup.‍

In a move that shook the NBA offseason, the 9-time All-Star and the NBA’s all-time leader in triple-doubles added a burst of star power to a squad that already featured LeBron James and Anthony Davis. And if Westbrook looks anything like he did to finish his run with the Wizards, he’ll make the Lakers a dangerous team every night out.

And while LA’s offseason made the Lakers the oldest team in the league (by average age), the Purple & Gold come into 2021-22 with the most combined All-Stars (57) of any team in NBA history.

One of the game’s most tenacious defenders and competitors instantly brings a little extra edge to a team looking to make its first trip to the Playoffs since 2018.

Born in The Bronx, NY, one of NYC’s favorite sons just returned home. Walker had a down year in Boston in 2020-21, but when he’s on, he’s one of the game’s top PG’s -- capable of creating space & scoring at will. New York welcomed him with open arms. If he catches fire, the Knicks Faithful will elevate his stardom to a whole other level.

The Bulls, as you might have heard, had a busy offseason. After missing the Playoffs for the fourth straight year, Chicago went on the offensive this summer. After acquiring Nikola Vucevic at the trade deadline, the Bulls were ready to really go for it. Building around Zach LaVine, the Bulls brought in 3 of the game’s elite offensive players at their positions. In addition to Vucevic the Bulls brought in Ball and DeRozan (more below). The Bulls acquired Ball in a sign-and-trade on August 8 and added DeRozan 3 days later.

DeRozan played his first 9 seasons with the Toronto Raptors and those seasons resulted in 4 All-Star appearances and 2 All-NBA nods. Traded to the Spurs for Kawhi Leonard, DeRozn hasn't had quite that same level of success -- but he's still an elite scorer from the mid-range and at the rim, and the chance to lead a Chicago team on the rise could signal a big season for the LA native.

Dinwiddie was supposed to be a huge part of the Nets title aspirations this past season. The Nets simply could not avoid the injury bug this season and that started with Dinwiddie in December when he partially tore his ACL. Now almost fully healed, Dinwiddie will look to play a big role in the Wizards backcourt alongside Bradley Beal. Dinwiddie will likely compliment Beal better than Westbrook.

Valančiūnas may be one of the most underrated players in the NBA. He quietly goes about his business every night and puts up big numbers. He has averaged double digits in points and rebounds the last three seasons in Memphis. He will be an interesting fit alongside Zion Williamson and the new look Pelicans. The Pelicans were also able to acquire Devonte’ Graham.

Graham got lost in the shuffle in Charlotte alongside Terry Rozier and Lonzo Ball. Graham’s numbers dropped across the board after having a phenomenal sophomore year. Graham had less shots, less minutes, less assists...well you get the picture. It was clear that Lonzo Ball was prioritized and Graham will have plenty of minutes to shine in New Orleans.

There’s just something about Rubio in Minnesota that just does not work. Rubio left the Wolves after the 2016-17 season and had three straight solid seasons in Utah and Phoenix. Phoenix moved on from Rubio in favor of Chris Paul and Rubio wound up back in Minnesota...and it did not go well. Rubio now gets a clean slate in Cleveland working with two great guards in Sexton and Garland. The soon to be 31 year old still has some gas in the tank to push the young guards.

Oubre left the Warriors and decided to sign a free-agent deal with the Hornets. Oubre will likely be part of the second unit along with Miles Bridges and Cody Zeller. Oubre isn’t even 26 yet and this will be his 7th NBA season. After a career year in Phoenix, Oubre took a step back in Golden State. This change of scenery may be just what he needs.

The 28 year-old is a 4-time NBA rebounding champion with 2 all-star appearances and an All-NBA selection...and signed a one year deal at the Veteran’s Minimum salary. Since leaving Detroit, Drummond has struggled to find an identity. An elite rebounder and efficient scorer, Drummond will be a great backup to franchise centerpiece Joel Embiid. Drummond and Embiid have had some scuffles in the past, but will be a great 1-2 punch at the center position for the Sixers.

Players aren't the only ones that have a lot of movement in the offseason. There are seven new head coaches in the league.