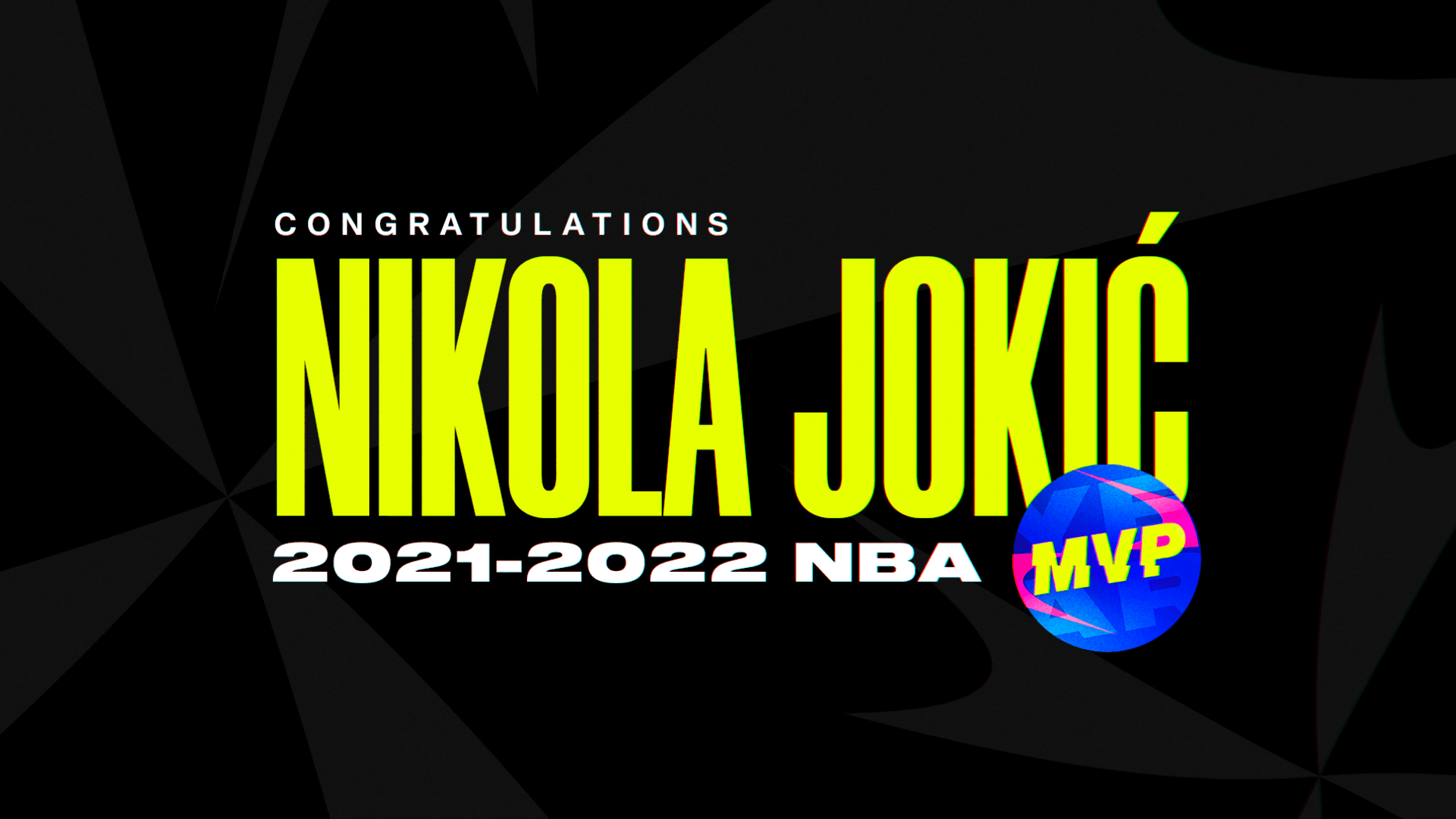 Congratulations to Nikola Jokić on winning the 2021-22 NBA MVP award! The Serbian superstar has 7 Moments on NBA Top Shot that capture the story of this award-worthy season where the Denver Nuggets racked up 48 wins, their second most since drafting The Joker with the 41st overall pick in the second round of the 2014 NBA Draft.

To celebrate and recognize his second consecutive MVP award, all of Jokić’s Series 3 Moments now carry the MVP badge.

Nov 6, 2021: With his 6-foot-11 frame and impeccable vision, Denver Nuggets center Nikola Jokić sees everything on the basketball court. That includes the defensive end, where the 2020-21 NBA MVP shows brilliance, rotating over for a game-winning, no-look block in a 95-94 win over the Houston Rockets. The Joker did it all on both ends, contributing 28 points and 14 rebounds in the victory.

Nov 14, 2021: Kevin Durant narrates one from his favorite plays of the season from the game-changing Denver Nuggets center as Jokić gets open for an inbound pass, catches it at the top of the perimeter, quickly squares up and fires a high-flying triple over the Portland Trail Blazers’ Jusuf Nurkić. The reigning MVP notched 28 points and flirted with a triple double in an emphatic win at home.

Dec 11, 2021: As one of the most dominant players in the NBA, the reigning MVP works in the post before dishing a no-look pass to teammate Aaron Gordon for an elbow 3-Pointer in a win against the San Antonio Spurs on December 11, 2021. Jokić finished the game with 35 points, 17 rebounds, eight assists, one steal and two blocks.

Jan 7, 2022: Forget everything you know about conventional basketball when Nikola Jokić hits the floor. The mesmerizing Denver Nuggets center defies positional norms, seamlessly carrying the rock the length of the floor against the Sacramento Kings, then hitting JaMychal Green in stride with a casual no-look, one-handed entry feed. Jokić finished with 33 points, 10 rebounds and seven assists in the win.

Jan 19, 2022: Look no further than Jokić for a crash course in how the NBA has evolved in the modern era. With time fast expiring in the third overtime period of a matchup between the Denver Nuggets and LA Clippers, the do-everything big man draws the attention of two defenders 25 feet away from the basket. Despite the aggressive double-team, the 280-pound point center finds a passing lane and air mails a skip pass directly into the hands of Aaron Gordon in the far corner just in time for a game-winning triple.

Feb 20, 2022: The Joker only needs a quick moment to make a play - if you take your eyes off of him for one second, he’ll make you pay. At the NBA All-Star Game, Jokić makes a full pivot on the perimeter, then stops and spots a cutting LeBron James for a reverse, alley-oop flush. In his fourth All-Star appearance, Jokić had an impressive line of 10 points, nine rebounds and eight assists in Team LeBron’s 163-160 win over Team Durant.

April 24, 2022: Whether he’s scoring points in bunches or using his gravity to set up an open teammate, Denver Nuggets big Nikola Jokić has the code to crack any defense. With the Nuggets needing one more bucket to seal the game and extend their season, the reigning MVP rolls after a screen, receives a pass and goes straight into a Eurostep before delivering an on-the-money dime to a wide-open Will Barton in the corner. Jokić put on a show for the Denver crowd with 37 points, eight rebounds, six assists and three triples in a 126-121 win over the Golden State Warriors in Game 4 of the First Round.

Congratulations on behalf of everyone at NBA Top Shot! Add a Nikola Jokić MVP Moment to your collection in the Marketplace today.

Explore all of the NBA and WNBA MVPs on NBA Top Shot using our MVP Badge Marketplace filter, and head over to Challenge HQ to participate in our new “Leagues Finest” Challenge, where you can earn a 05-06 Run It Back Pack, Series 3 KD Certified Elite Pack and Series 2 Throwdowns Pack for playing along.