The Power Of Trade Tickets 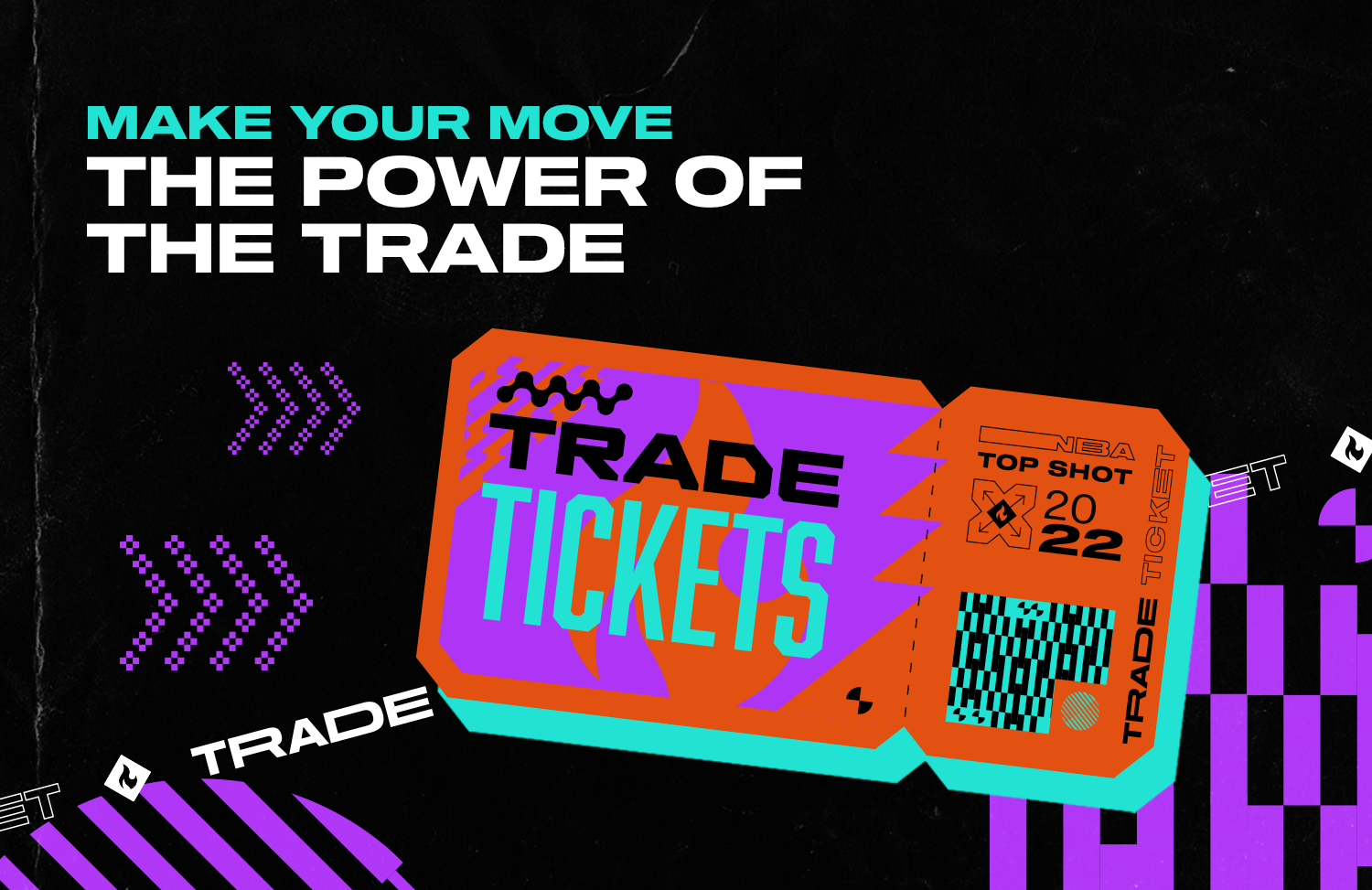 The right trade can change a player’s career, the trajectory of your favorite team’s season and a fan’s future.

The wrong trade can set the stage for a minor retool or major rebuild.

Next week, you’ll be able to trade players from your NBA Top Shot collection for Trade Tickets that can be used to unlock and redeem brand new packs with brand new players, featuring some of the coolest highlights from the 2021-22 NBA season and All-Star Game.

Included in those packs are 8 unique new Moments from “Fresh Threads,” a set we introduced this year to help tell the story of the season by featuring players on new teams for the first time on NBA Top Shot, whether by way of the midseason trade or free agency signing.

Trading your Moments for Trade Tickets that can be traded for new packs with new Moments from NBA players who were recently traded.

General Managing your roster in the Metaverse.

So, which Moments are you going to trade? What players do you hope to get back?

While you think about the moves you’ll make and we eagerly anticipate seeing what you’ll pull in these new packs, here’s a look at some of the most impactful trades in recent NBA history, and some of our personal fan favorites as members of the NBA Top Shot team.

For the sake of my personal sanity and wellbeing, we will not be revisiting or diving into the details of that time the New York Knicks traded Patrick Ewing.

Isaiah Thomas to the Boston Celtics

On February 19, 2015, the Boston Celtics traded Marcus Thornton and a 2016 1st Rd Pick (belonging to the Cleveland Cavaliers) to the Phoenix Suns for Isaiah Thomas.

Thomas found his groove in Boston during the back half of that season, helping the Celtics make the NBA Playoffs under second-year coach Brad Stevens.

The following two seasons, he’d be an NBA All-Star and folk hero, averaging a career-best 22.2 and 28.9 points per game, pushing the team all the way to the Eastern Conference Finals in 2016-17, winning over the hearts and minds of a city in the process, ultimately falling short against LeBron and Kyrie.

The next season, IT would be at the heart of a trade that found him switching jerseys with Kyrie, changing the trajectory of the Boston Celtics franchise and IT’s career in the process. The ripple effects of IT to the Celtics would go on to impact the NBA for years to come, and still is to this today.

Jason Kidd to the Dallas Mavericks

Jason Kidd may be best remembered for his days as a member of the Phoenix Suns and New Jersey Nets, but the story of Jason Kidd starts and continues with the Dallas Mavericks. Kidd, drafted by the Mavericks 2nd overall in 1994, is now in his first year as the team’s head coach, with a 38-25 record as of March 5, 2022.

After being traded by Dallas to the Phoenix Suns during the 1996-97 season, he made his way back to the Mavericks in February 2008. On February 19, 2008, Jason Kidd, Malik Allen and Antoine Wright were traded by the New Jersey Nets to the Dallas Mavericks in exchange for a huge package including Devin Harris, a 2018 and 2010 first round pick, other players and cash.

Two years later, Dirk Nowitzki and Jason Kidd would go on to win the franchise’s first and only NBA title, with plenty of help from Shawn Marion, Tyson Chandler, J.J. Barea and Jason Terry, defeating the Miami Heat in the NBA Finals in six games.

The 37-year-old point guard was far from the peak of his powers, but powered through the epic Playoff run clocking in over 36 minutes per game as the team’s starting point guard. It was the only NBA title Kidd or Dirk would win.

Marc Gasol to the Toronto Raptors

There's making an immediate impact on a team, and then there's stepping in as a defensive anchor and starting center for a team that would go on to win it all months later.

On February 7, 2019, the Raptors traded Jonas Valančiūnas, Delon Wright, CJ Miles and a 2024 2nd Round Pick for Marc Gasol.

After 10 seasons with the Grizzlies, the three-time All-Star found himself on a new squad in the midst of an epic run that delivered the Toronto Raptors their first NBA Championship in franchise history, defeating the Golden State Warriors in six games.

In 2011, the Thunder traded Jeff Green, Nenad Krstić, and a 1st Rd Pick for Kendrick Perkins (and Nate Robinson). Perkins played a massive role in establishing the culture of OKC basketball and helped get them to the finals the next season when their best 3 players were all under 23 years old. — Brandon Sowle, Content Inventory Lead

James Harden to the Philadelphia 76ers

If you asked me this question two weeks ago, it would have been something completely different, but three games in, the Ben Simmons for James Harden deal is my favorite. We traded a guy that refused to play for a legitimate top 10 player in the league.

It still hasn't sunk in. The joy on the players' faces tells the whole story. — Matt Schorr, Flash Challenge Mastermind

Dikembe Mutombo to the Philadelphia 76ers

The midseason trade that I remember the most is Mutombo being traded to the 76ers in 2000-01. Even though Shaq treated everyone like a rag doll back then, and he didn't stand much a chance against Shaq and the Lakers in the NBA Finals, Dikembe was just such a huge burst of energy for us and a rim protector we didn't have. He really gave an Allen Iverson led team a force down the middle and somebody who always gave their best.

I just love Mutombo, and the wag. He was a big reason we got to the Finals and got us to a place we haven't been in a really long time, but hopefully we'll get back to soon. — Kev Scheitrum, Content Marketing

Rasheed Wallace to the Detroit Pistons

For me personally, it's the Knicks getting Carmelo, just cause all of the hype and anticipation built into it. For history, it’s gotta be Rasheed to Detroit. — Jacob Eisenberg, Community Lead

A very memorable trade deadline was '08 when the Lakers traded for Pau Gasol. I had moved to LA just a couple years earlier and was surrounded by crazy Kobe-loving Lakers fans, especially because I was working for the LA Sparks at the time. I'm a huge Bulls fan and they were also in talks to get Gasol at the time. BTW, Kobe just a year earlier went on LA radio and demanded a trade to the Bulls, which didn't happen because the Bulls refused to move Luol Deng.

So, when Gasol got moved to the Lakers at the deadline I was devastated. Not only because the Bulls fell flat, but because I also knew that the Lakers had been elevated to Championship-contending status and I was gonna hear about it non-stop. And I did. — Noam Hoffenberg, Content Media Lead

Get Your Trade Tickets Ready

We’ll be watching The Locker Room this week to see all the trades made by our community, and will see you on Tuesday, Wednesday and Thursday for your opportunity to turn those Trade Tickets into what could become the cornerstone of an epic collection.