Roundup: The Quarters Are Coming 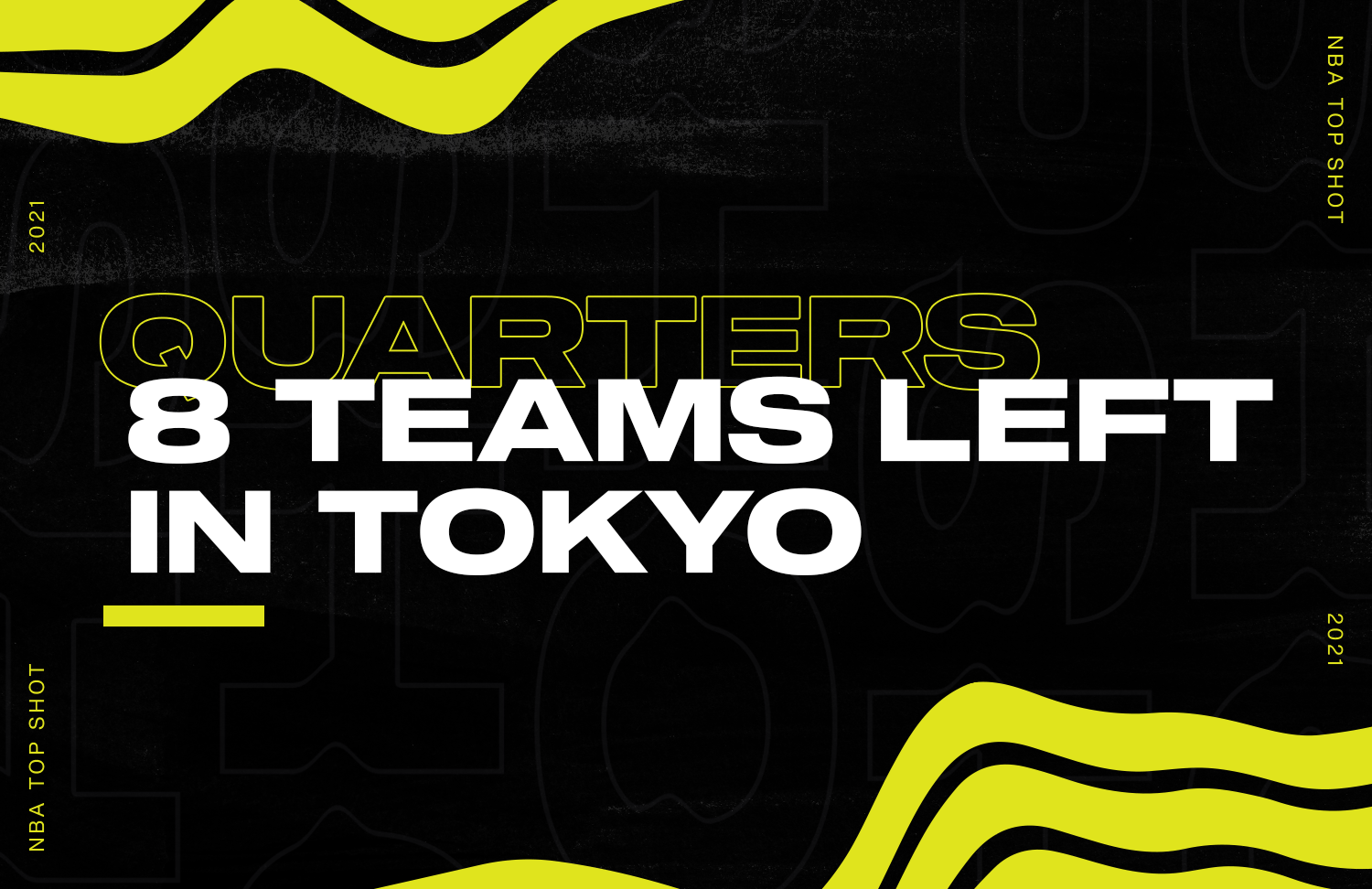 And after Sunday’s quarterfinal draw sent out some shockwaves in the international basketball world, here’s a breakdown of what’s ahead in Tokyo -- featuring 8 of the world’s best teams (including an early matchup of 1 vs 2) and dozens of NBA players looking to bring home gold.

>> The Marketplace | Check Out Your Collection

Two of the top teams in the world. Then, now, (almost) always.

With somebody going home empty-handed.

(Hopefully you read all of that in the movie trailer voice)‍

Normally, these are two teams that’d meet in the finals - like they did in 2008 and 12 (or the semis in ’16). But after Spain fell to upstart Slovenia in the final game of Group Play, we get the matchup of powerhouses early. Like, go-home-without-a-medal-if-you-lose early.

The USA recovered after an opening loss to France, with Kevin Durant and Jayson Tatum catching fire and an NBA-packed roster finding its stride against Iran and the Czech Republic.

But Spain will be a test -- likely even more than France was. The 2019 FIBA World Cup champs have a core that’s done damage together, and won big, on the international scene for a decade-plus now, not to mention Marc & Pau Gasol owning the paint and Ricky Rubio playing out of his mind.

Matchup To Watch: The Guards. Tatum went off in the US’s group stage closer — and he’s surrounded by Damian Lillard, Jrue Holiday & Zach Lavine, among others —  but Ricky Rubio’s 4th in the tournament in scoring and 3rd in assists, backed by Sergio Llull and Victor Claver, two renowned international performers who played stints in the league.

On the Australia side, Boomers have been on the up for years now, with Australia becoming one of the NBA’s best feeder markets.

Patty Mills, the longtime Spurs sparkplug, has become one of the world’s elite performers on the international stage. Third in scoring in the tournament, he’s running the show for one of the most talented Aussie squads ever — with an eye on medaling for the first time.

On the other side, longtime NBA mainstay Luis Scola is doing what he always does in FIBA play. Taking over. Argentina’s in a transition period between its golden generation (the ’04 team was the last one to give Team USA a loss on this stage before France did earlier this tournament) and went just 1-2 in group play, but this team’s dangerous.

Matchup To Watch: Mills vs. Facundo Campazzo. There’s not much like point guard play in the (more wide open) international game, and while Mills is more familiar … Campazzo (an NBA rook with the Clips at the age of 30) is popcorn worthy every day.

Can anyone stop Luka Doncic?

Can anyone stop Slovenia?

Doncic made a name for himself going into the 2018 Draft for pushing Slovenia to its first-ever Eurobasket title, and since then, Slovenia hasn’t looked back. With Luka in uniform, Slovenia’s never lost. Really. They're 16-0 with him at the Senior National Team level.

Undefeated in the tourney so far — including a win over Spain on Sunday — there’s some Team of Destiny feel to Slovenia (ranked 16th in the world), though it won’t (ever) be easy.

Germany’s embracing a new wave, after an era led by Dirk Nowitzki (Luka’s Mavs mentor). There’s a lot of talent, though without a ton of high-level international experience. Germany struggled a bit in group play, finishing third with a 1-2 record as Mo Wagner & Isaac Bonga’s squad (17th in the world) picked up a win over Nigeria, but fell to Italy & Australia by double-digits.

Matchup To Watch: Anyone vs. Luka. Spain played a Box & 1 (which your high school might have played that one time?) against the Mavs star on Sunday, and he still almost ended up with a triple-double. Meanwhile, his teammates rose up around him. Basketball’s a game of confidence, and there’s some magic in Slovenia right now.

Two rivals in everything (cooking! beaches! every single sport!) now meet for a chance at the final four.

Both teams have fallen a bit in the international rankings, but when you’re looking for every-single-possession-matters, dive-into-the-stands, drinks-flying-at-the-bar intensity … it’ll be tough to beat this one.

Led by six current and eight total players with NBA experience — including the reigning DPOY Rudy Gobert — France (7th in the world) started strong and hasn’t stopped, knocking off the US in the opener and going undefeated in group play. For Italy (ranked 10th in the world), Danilo Gallinari’s getting support from a younger core, including Warriors guard Nico Mannion’s red-hot tourney (15-5-3 on 45% shooting), as it looks to make its first trip to the semis in 17 years.

Matchup To Watch: Gallinari vs. Batum/Guerschon Yabusele — Expect Gallo (who’s had limited minutes) to play a big role in this one in a swingman role, which will have him working in the paint against Yabusele & Gobert, but on the perimeter with Evan Fournier and Nic Batum at times. Fournier’s been one of the top players in the tourney so far, and Batum’s a lock for a big game when the stakes are high.

>> Check Out Your Collection

>> Go To The Marketplace