The WNBA's On Top Shot: Here's What To Know 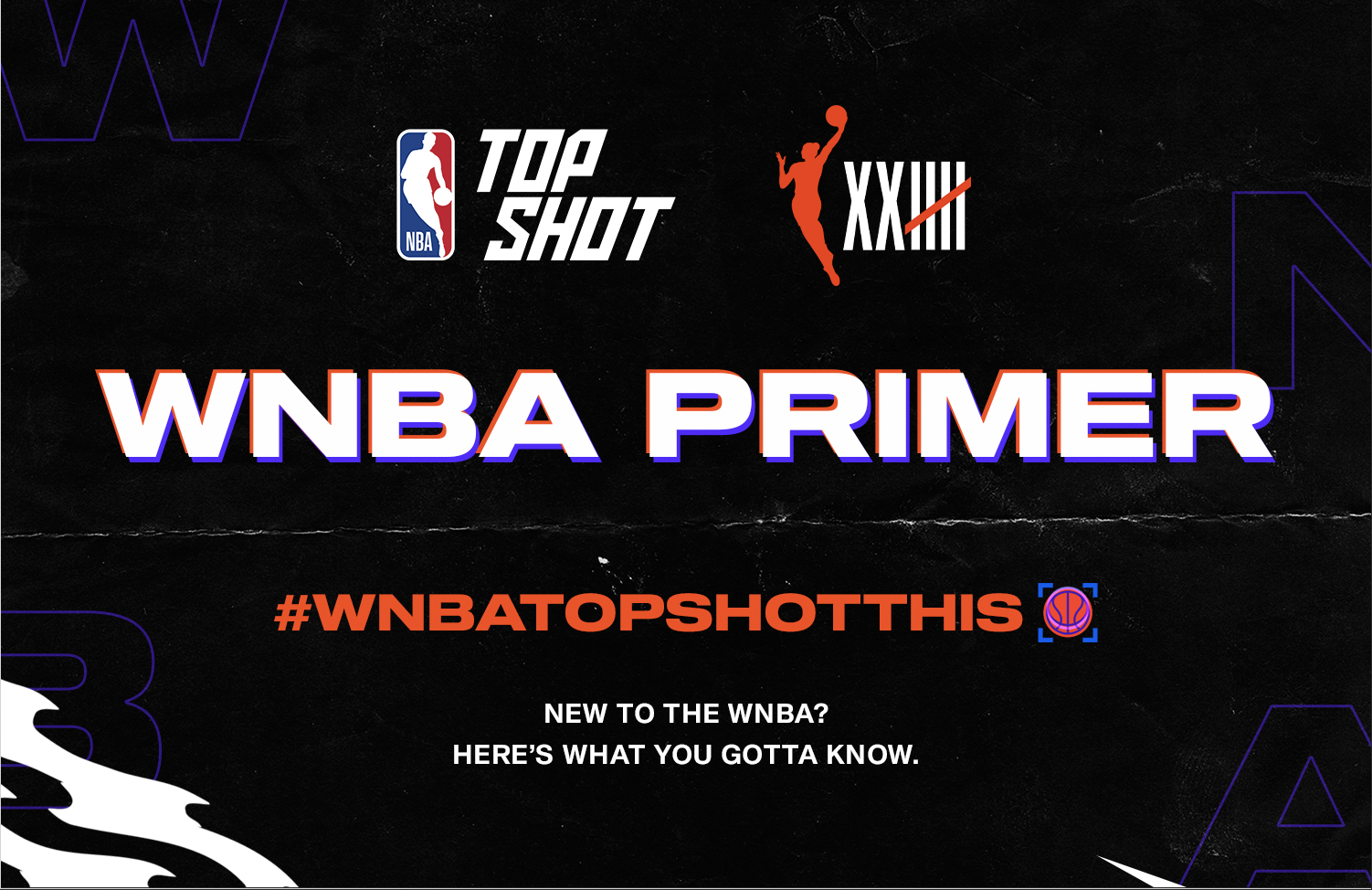 We’re excited to finally be able to say this … the WNBA is on Top Shot!

We’ve been fans of the W for years (some of us even remember the first season), and we’re proud to be able to join the hoops world in celebrating the incredible women in the WNBA and showcase some of the best Moments in the 2021 WNBA season.

The WNBA season is in full swing and teams are vying for a spot in the Playoffs. With that in mind, let’s jump into a primer on the WNBA teams and some of the best players in the league -- with a special look at the players in Friday’s drop.

HIT THE MARKETPLACE TO FIND ALL WNBA MOMENTS >>>

Into The Home Stretch

Unlike the NBA, which has an Eastern and a Western Conference Playoffs (with the winners meeting in the NBA Finals), the W doesn’t build its postseason based on conferences.

Instead, teams are seeded based on overall regular-season record, regardless of conference. The top 8 of the league’s 12 teams qualify for the second season, with the top two securing byes all the way through to the semifinals. The No. 3 and No. 4 seeds secure a bye to the second round while the No. 5 seed hosts the No. 8 seed and the No. 6 seed hosts the No. 7 seed in Round 1. In subsequent rounds, the brackets are re-seeded.

As of today, the Connecticut Sun (19-6) and Las Vegas Aces (18-7) stand at 1 and 2 in the league, with four of the next five teams -- the Seattle Storm, Minnesota Lynx, Phoenix Mercury and Dallas Wings -- all coming from the Western Conference.

Here’s what you gotta know about each team.

The Dream were lucky to get Williams, who has been nothing but a steady force since joining the team. She contributes in every aspect of the game. The combo guard brings with her a ton of experience along with a crafty handle, and the ability to facilitate for her teammates. Third overall pick in the 2021 WNBA Draft Aari McDonald, has incredible upside but is still getting used to the WNBA game. The Dream are in rebuild mode and the combination of Williams and McDonald figures to be an important part of that.

One of the biggest storylines, perhaps in WNBA history, is Candace Parker leaving Los Angeles after 13 seasons to join the Chicao Sky. The legendary F/C has been a staple in this league and is now teaming up with the new record holder in Assists Per Game, Courtney Vandersloot. Vandersloot, who has been with the Sky her entire career, has led the league in assists the past four seasons.

The Sun this year are led by a strong, versatile core, headlined by the return of DeWanna Bonner to the WNBA. Bonner joined the squad after spending her first 9 years in Phoenix, and is now paired with two elite bigs who happen to share a last name. Brionna Jones just made her first career all-star game appearance and is having a career year with career highs in points, rebounds and assists. Jonquel Jones is a 3-time all-star and has developed into one of the W’s most dominating forces. She is averaging 19.8 points and 10.9 rebounds per game. Jonquel is one of three players in the league currently averaging a double-double. The Sun are going to be a very difficult out in the playoffs.

Finishing as a top three scorer is quite an accomplishment for a rookie, a feat that Arike Ogunbowale was able to pull off in 2019. She followed that up with leading the league in scoring with 22.8 points per game last year, and stands at sixth this year. Long story short, Ogunbowale is a walking BUCKET and a key component to the Wings success. Harrison has been the most important player off the bench for the Wings this season. Despite not starting, she plays close to starter minutes. The Wings aren’t out of it yet but the Western Conference is extremely difficult. They will have to be nearly perfect down the stretch.

The Fever got a boost this season in Wilson, who got her first taste of WNBA action. The former Texas A&M Aggie brings a ton of energy on both sides of the ball and is a menace defensively. Joined with savvy vets such as Danielle Robinson and Jantel Lavender, the Fever are trying to turn things around. The fourth overall pick in the 2021 draft, Kysre Gondrezick, is still adjusting to the pro game but has shown high-upside flashes of the talent that made her one of the year’s top prospects.

How many 25-year-olds have their own statue already at their alma mater? The list might top out at one, and that one is the great A’ja Wilson. An absolute force on the court, there is nothing that this superstar can’t do. Fresh off an MVP season, Wilson looks to lead a loaded Aces roster that has FOUR total All-Stars in the 2021 season (Dearica Hamby, Liz Cambage, Chelsea Gray) Cambage, the elite Australian center, much like Wilson dominates in every facet of the game. Rounding out the rotation is Kelsey Plum who is having the best offensive season of her career.

The Sparks are lead by two former #1 picks, Nneka and Chiney Ogwumike. These two sisters can take over any game. Nneka has spent her entire career with the Sparks, while Chiney joined the team in 2019. The frontcourt duo makes life tough for opponents with their athleticism and tenacious defense. In addition to being a top WNBA player, Chiney also hosts a nationally broadcasted radio show and is a full-time basketball analyst. Erica Wheeler made the all-star game in 2019 and was named all-star game MVP. Wheeler missed the entire 2020 season due to Covid-19 but has come back this season stronger than ever with career highs in scoring and rebounds.

Sylvia Fowles’ is one of the greatest players in the history of the W with a legacy marked by dominant post play. In the 2020 season, Fowles became the new WNBA career rebound leader. The 7-time All-Star is also one of the best defenders the league has seen, and her presence on the court alone troubles opposing offenses. Minnesota also has the reigning rookie of the year, Crystal Dangerfield. Dangerfield has been a great presence for the Lynx and is a big part of why the Lynx are currently ranked 4th in the standings. Two-time all-star Napheesa Collier is a talented scorer and can take over any game. The former UConn standout fills the box score every night and could be the catalyst for the Lynx to make a deep run.

Sabrina Ionescu is a 2x Wooden Award winner and a former first overall draft pick in the 2020 WNBA draft. Ionescu has already become a floor general, averaging 10.5 points, 5.8 assists, and 5.7 rebounds per game and is looking to help the Liberty return to the playoffs for the first time since 2017. The Liberty are led by Betnijah Laney, who just competed in her first WNBA All-Star Game. Laney, averaging 17.8 points per game, scores on every level and opens the floor for Ionescu to work. This duo has put New York in a position to steal a playoff berth late in the season. Sami Whitcomb has been an important part of the Liberty this season but unfortunately, she will be out the next 2 weeks with an injury. Laney and Ionescu will have to reach yet another level to keep the Liberty’s playoff chances alive.

Another superteam, the Mercury are always a handful with three superstars at the helm. There’s Dianna Taurasi, arguably the GOAT, sharing the backcourt with Skylar Diggins-Smith, in her second season since joining the Mercury. As consistent as they come, Diggins-Smith contributes in every category across the board. And then you have Brittney Griner, a true force on the block both offensively and defensively. There has only been ONE SEASON where Griner hasn’t led the league in blocks since coming into the W. Griner is also well-known for throwing down dunks on her opponents. This is a very explosive and exciting team and they are holding their own in the Western Conference. The Mercury had a heart-breaking second-round loss last season and will be looking for a deeper playoff run.

The defending champions are back and are looking for another title. You know a team is in good hands when both members of their starting backcourt started the 2021 All-Star game. Sue Bird and the WNBA go hand in hand, as there’s no conversation to be had about the latter without mentioning the former. The 12-time All-Star selection and all-around basketball legend, Bird dazzles with her crafty passing and ultimate leadership for the Storm. Loyd, the #1 pick in the 2015 WNBA Draft, is an elite scorer and 2x champion. She shot her highest FG% of her career in the 2020 season. And then there is Breanna Stewart, who is only the most decorated, winningest college basketball player of all time. Oh, and she’s got two WNBA championships with two Finals MVP awards. The Storm are an absolute force.

Not many players have been able to dominate the WNBA like Tina Charles. Always as advertised, the veteran center has been a scoring and rebounding machine her entire career. Charles is the current league leader in points per game with 25.4. That is almost 5 points per game more than the next closest player. 2021 All-Star, Ariel Atkins has taken a big leap in her game averaging a career-high 16.3 points per game this season. She fills up the box score every night and performs just as a top 10 pick should. The biggest news for the Mystics is their other star, Elena Delle Donne, has returned from a career-threatening back injury that kept her out of play for 22 months. Donne returned to the court last week and the crowd gave her an amazing welcome. The 6-time All-Star and 2-time MVP scored 16 points in her return and took down the defending champion Seattle Storm. The Mystics have had a tough start to the season but with the return of a healthy Donne, there is still time to turn it around and secure a playoff berth.

NEW TO TOP SHOT? SIGN UP AND RECEIVE AN EXCLUSIVE WNBA MOMENT >>>

Phase 1 of Trade Tickets Has Arrived