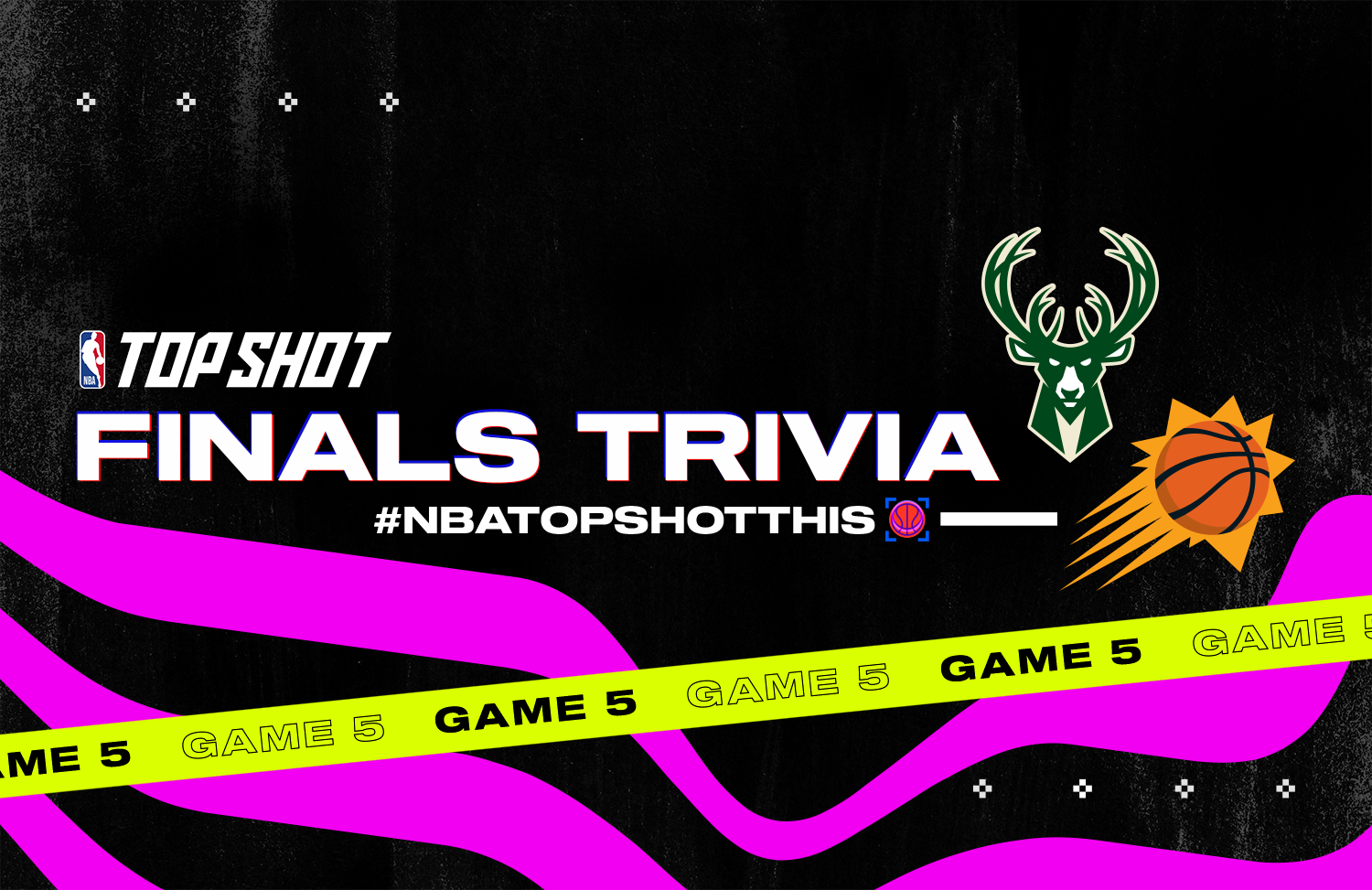 The steal. The slam. Pandemonium.

The Milwaukee Bucks erased a 16-point deficit early in Game 5 and capped it off with a sequence that could be remembered as an all-time moment in franchise history.

We also were able to bring you behind-the-scenes access from our first-ever NBA Top Shot Suite Experience where eight lucky collectors enjoyed an arena tour, shopping spree, meet-and-greet with Phoenix Suns legends, Rex Chapman and Tom Chambers, plus much more.

All of this on top of a ticket to one of the more electrifying finishes in the NBA Finals.

We're back with another round of #NBAFinals x #NBATopShotThis Trivia! 🙌🏼

👀 Follow our Twitter throughout Game 5
🔥 150 Packs, 150 Unique Winners
✅ QT with your answer & link to your NBA TS profile
#️⃣ Use #NBATopShotThis

Throughout Game 5, we asked 8 questions and a total of 150 unique Collectors were selected to receive a 2021 #NBAPlayoffs pack, pending the correct answer(s).

Q: How many teams has Jae Crowder played for during his NBA career?

A: Crowder has played for 7 teams during his career: Mavericks, Celtics, Cavaliers, Jazz, Grizzlies, Heat, Suns.

Q: Name the playoff teams (in order) the Phoenix Suns defeated to reach the NBA Finals.

A: Teague was drafted by the Atlanta Hawks in the 2009 NBA Draft.

Q: Pat Connaughton was a multi-sport athlete in college. Name the two sports he played while at Notre Dame.

A: Connaughton played baseball and basketball while at Notre Dame.

Q: Jrue Holiday played alongside fellow future NBA player __________ in the backcourt while at UCLA. Fill in the blank.

A: Holiday played alongside Darren Collison at UCLA.

Q: Brook Lopez and his twin brother both play in the NBA. What is his name and what team does he play for currently?

A: Robin Lopez plays for the Washington Wizards.

Purchase the Lopez Twin Moments in the Marketplace >>>

Q: How many of Devin Booker’s college teammates have played in the NBA?

A: Eight of Booker’s teammates from Kentucky have played in the NBA.

NOTE: Marcus Lee was signed to a training camp deal with the Miami Heat and did make one appearance in a preseason game, but did not make the regular season roster.

Q: Giannis Antetokounmpo is currently playing alongside one of his brothers on the Bucks. Name him.

A: Giannis plays alongside his brother, Thanasis.

We’ll see you this Tuesday at 6pm PDT for #NBATopShotThis Game 6 Trivia.