End of S2: The Moments That Defined The Season, Part 1 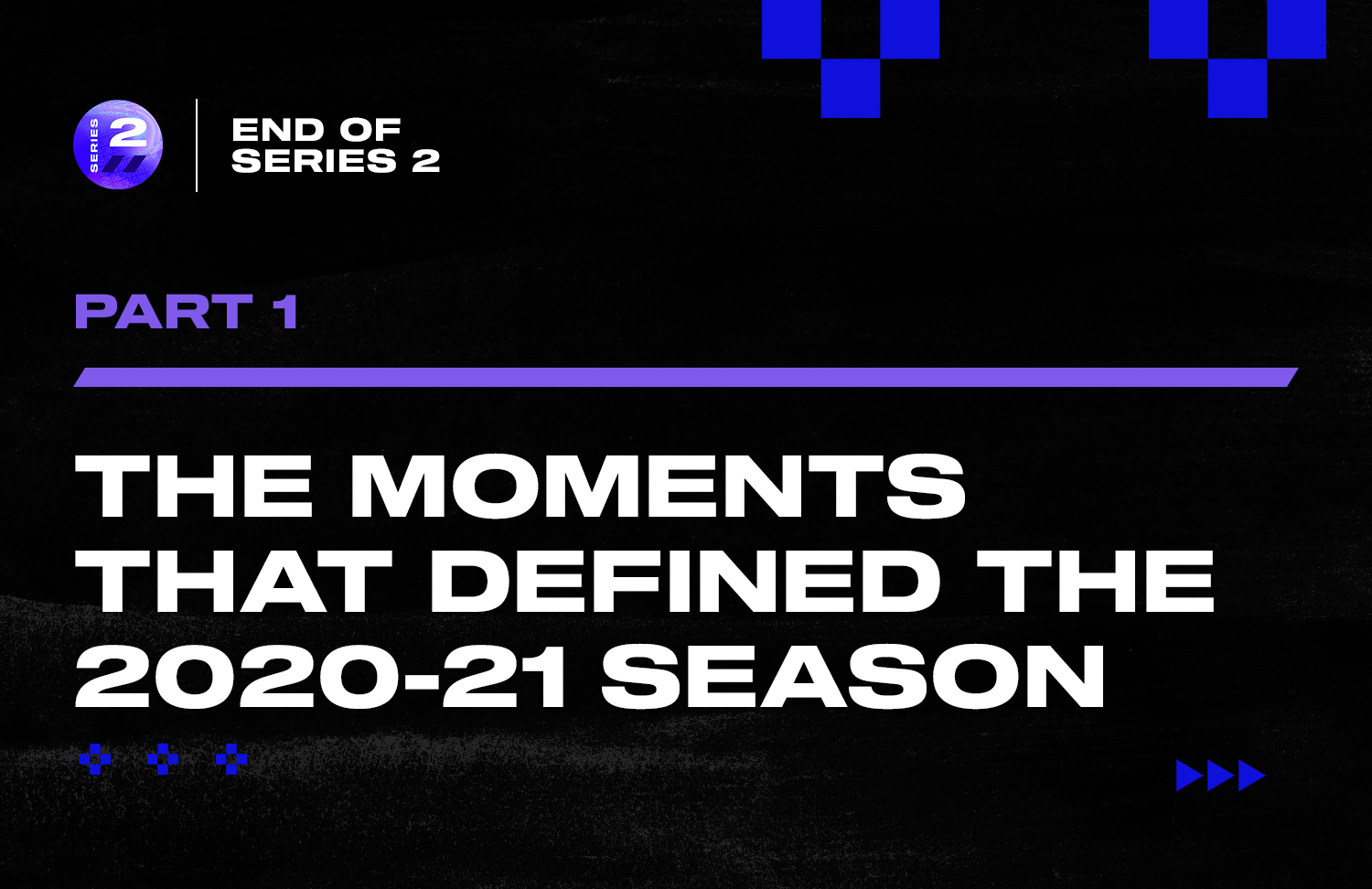 As we close Series 2 (and all S2 plays become Limited Edition), we're taking one more trip through the 2020-2021 NBA Season -- using Top Shot Moments as a timeline. We hope you enjoy this look back on where the Season & Series collide, as much as we enjoyed making it.

This is part 1 of a two-part series, with Part 2 coming Sunday. Want to watch the Moments again? Play the video above, to see our own Jacob Eisenberg & Austin Kent go through them all.

Simply put, the NBA is better with Kevin Durant healthy and balling. Back in action with a new-look Brooklyn Nets, KD drills a three from the top of the key to kick off his Nets scoring career. One of the greatest scorers to ever do it, NBA fans were reminded of what was to come from the superstar this year.

Is there anything better than an opening night buzzer beater?! The Jayson Tatum step-back is simply UNSTOPPABLE, and once he gets to his spot, good luck blocking his shot. In a battle of Eastern Conference Powerhouses on opening night, A last second three pointer gave the Celtics a win to start their season versus the eventual champion Milwaukee Bucks.

Tyrese Haliburton came into the league with plenty of fanfare, yet some felt he went much lower in the draft than he should have. With a classic floater in the lane, Haliburton shows off the touch and IQ to knock down his first NBA bucket, looking off Nikola Jokic in the process. Haliburton -- a Certified Baller on Top Shot -- was a steady force his rookie season, showing maturity beyond his years.

For nine seasons, James Harden got bucket after bucket for the Houston Rockets, leading them to the playoffs in eight straight seasons. An incredible accomplishment for the franchises 2nd leading scorer of all time! In James Harden's final moment as a Rocket, we are blessed with the wicked stepback that helped change the way offense was played in the NBA.

It feels like people have talked about LaMelo Ball in the NBA for years, hasn't it? Well, the time has finally arrived, and here we get to see Ball turn on the jets to get to the rim, take some contact, and score his first ever NBA field goal. The Rookie of the Year would end up with plenty more points, and rebounds, and assists, taking the Hornets to the playoffs in his first season.

You've got to accomplish some special feats to lock down an MVP award. This assist from Nikola Jokic, his 18th(!) of the game, set a record for most assists in a game by a center in the last 50 seasons. By setting the tone this early in the season, Jokic continued his stellar play throughout the year to capture the most elusive individual award that the NBA has to offer.
‍
Go To The Moment >>‍

DeAndre Ayton was the number 1 pick in the famous 2018 NBA Draft for a reason. The big man is a menace on the boards, constantly creating additional opportunities for points with his hustle, athleticism and awareness. And while Ayton had a big year in 2019-20, his breakout came during the Suns' run to the Finals. Thing is, he's been doing stuff like this for years. As this Moment proves, if you take your eye off him when a shot goes up, you're likely going to pay for it.

Perhaps one of the most iconic plays captured as a Top Shot moment - LeBron James puts up a three from the corner, and turns to the bench to await the result of the shot. Did it go in? Well, Dennis Schröder started going nuts, so it's safe to assume so! Nothing better than seeing the legend himself having a blast in his kingdom - the basketball court.

14-Year Vet Mike Conley made his first All-Star appearance in the 2020-2021 NBA Season in style. Not only did he lead the Utah Jazz to the best record in the NBA last season, but he also had the first narrated Moment in NBA Top Shot history. Seeing Stars challenge reward collectors were rewarded with a One Of A Kind Moment. In this Moment, Conley breaks down the film on how he read the floor, deciding to throw an epic alley-oop to his fellow teammate and Defensive Player of the Year, Rudy Gobert.

James Harden didn’t waste any time getting comfortable in his new home. In just his fourth game as a Brooklyn Net, we see Harden give NBA fans a taste of what the star-studded Nets lineup has to offer. With a trailing Kyrie Irving behind him, Harden drops a between-the-legs dime to Kyrie who then finishes at the rim. Harden clearly wasn’t shy of showing his excitement of being on his new team.

Trae Young is known for always putting on a show. On the one-year anniversary of NBA legend Kobe Bryant’s passing, he did just that. Kobe Style. What better way to do that than hitting big shots during big-time moments? Young sealed off the win, no other way than with his exceptional range, with a 32-foot dagger and immediately flashed the numbers two and four in honor of Kobe. Kobe was watching over him that night.

The Sixers earned the #1 Seed in a competitive Eastern Conference for the first time since 2001. When you’re in a conference with the Nets three-headed monster, Giannis and the Bucks, and a hungry young Hawks team, every game matters. Tobias Harris knew that. Down by 1 to the Lakers with 11 seconds remaining in the game, Harris takes command. Harris pulls up from 12 feet out and ends it -- putting a dagger into the Lakers. Harris pulled up with confidence and the Moment’s thumbnail shows that.

LaMelo’s Ball 2020-2021 NBA Season came with many accolades. He was named an NBA Rising Star, 1st Team All-Rookie, Rookie of The Year, and the Cool Cats Master challenge reward. There is no better way to start your NBA career than this. This Moment is the key to entry into the exclusive Nine Lives Lounge (as long as you hold all 30 Cool Cats Moments). Here, Ball displays off his cat-like reflexes as he catches flight after a Charlotte Hornet miss and jams it in over Pacers two-time All-Star Domantas Sabonis.

Comebacks. Clutch Shots. This Moment has it all. When you’re down by 5 with 12 seconds left against the Nets (including some former teammates), it’s hard to have faith, but not if you’re Russell Westbrook. After teammate Bradley Beal sinks a clutch three bringing the game within 2 with 6 seconds left, Westbrook and teammate Garrison Mathews cut off the Nets inbound pass. Mathews immediately finds Westbrook who sinks the go-ahead three lifting the Wizards over the Nets in a battle for the ages. It was a short stint for Russ in DC, but he made it count.
‍
Go To The Moment >>

There’s three point range and then there’s Steph Curry range. As Curry pulls-up from the Mavericks logo, this Moment is a friendly reminder that no range is too far for Curry. This is just one triple from the eleven he dropped against Luka and the Mavericks for a 57 point performance, on the way to one of the best seasons of Curry's career.

In Derrick Rose’s Knicks return, he shows his vintage MVP flashes. Rose, straight away, displays chemistry with new Knicks teammates by sending a no-look dime to Obi Toppin for an easy bucket.There’s no better gift in basketball than an easy bucket, and this Challenge Reward made The Gift set a hit in Series 2.

The dunk that was heard around the world. Anthony Edwards proudly reminded us why he was the #1 overall pick in 2020’s NBA Draft with this historic dunk. Edwards, without any fear, took flight on the Raptors - creating an instant-classic Moment. When Edwards takes flight, make sure to have your #NBATopshotThis hashtag ready. There’s plenty more where that came from with this Rising Star.

Joel Embiid was in the MVP conversation last season and this Moment is evidence as to why. It’s not everyday you see a 7-foot big-man stepping back and hitting 20-foot jumpers. It’s also not everyday you see a center dropping a casual 50 bomb. This jump shot was just two of Embiid’s 50 points in a win over the Chicago Bulls. This Moment perfectly displays Embiid’s unconventional skill set.

Gobert gets not 1 but 2 massive blocks on the Charlotte Hornets on the way to a rout victory. Gobert finished the game with 6 blocks, which is just another night in the office for the reigning Defensive Player of the Year.

When a moment is so epic, another basketball legend has to emulate it in an All-Star game! Steph Curry pays a tribute to the classic LeBron reaction, and shares a laugh with his teammate for the evening. It was a special night seeing Steph and LeBron on the same team!

The audacity of Dame to take this shot to end the game. Dame scored the last 11 points of the game to hit the target of 170 and win the game for Team LeBron. Dame scored 32 points and it took a 16-16 shooting night from Giannis to prevent him from winning the All-Star Game MVP.

This marks LaVine’s first All-Star Game appearance and it likely won’t be his last. LaVine displayed his incredible hang time as Harden’s pass was slightly off the mark and LaVine adjusted in mid-air for the layup finish.

Caris Levert, with one of the stories of the season. LeVert was traded from the Nets to the Pacers and during the physical it was discovered that LeVert had cancer. He fought his way back, worked his way back into health & playing shape ... and made his way back onto the court, with his same electric game, to close the 2020-21 season.

De’Aaron Fox makes an unbelievable full court pass to Barnes who catches, turns and hits the buzzer beater to take down a scrappy Cavs team. There is something about a buzzer beater that is always fun to watch...unless it’s against your favorite team...then not so much. Barnes continues to play at a high level deep into his career.

Special from a Top Shot perspective? What happened right after, when Tyrese Haliburton dumped water on Barnes and said PUT THAT ON TOPSHOT.

Grab S2 Moments In The Marketplace >>