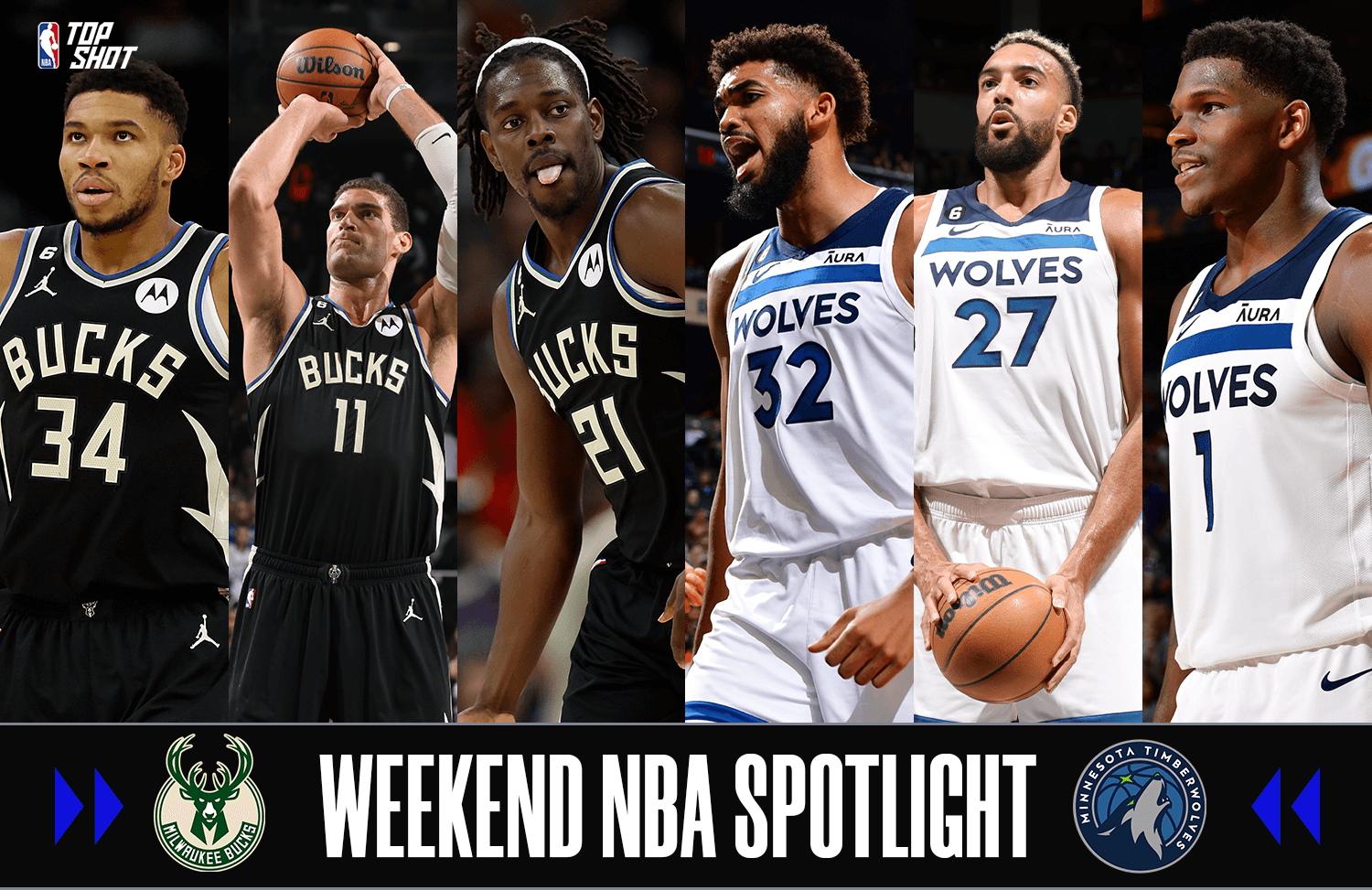 Looking for weekend plans? Close your work laptop, sit back in your recliner, grab a cold drink, put on your favorite team’s gear and get lost in the bounce of the basketball.

What’s cooking in the NBA on Friday night? 12 games.

That’s 24 games of hoops (1,152 minutes) over 3 days, featuring some of the most important players in the game, and the results of these games will determine how you can earn a brand new limited edition video collectible from the winning team of tonight's NBA Spotlight.

Welcome to our “Game of the Week” Challenge Breakdown, exploring key narratives for the biggest matchups, including who we think will lead in assists – a crucial component to earning a Reward from the primetime 10pm ET battle between the Milwaukee Bucks and Minnesota Timberwolves.

So, what are you waiting for? Join us for a Twitter Spaces at 5pm ET, set your countdown clock for this weekend's NBA tip-off at 7pm ET and embrace the lead-up to the Game of the Week and a core part of our Weekend Challenge.

The best of the hardwood – the stars of your Top Shot collections – are ready to put on a show.

Who will lead the Milwaukee Bucks vs. Minnesota Timberwolves game in assists?

Owning a Moment from the player with the most assists during this game is a key requirement to completing this weekend’s challenge and unlocking a limited edition Moment Reward from the winning team, so let’s consider who that may be when the final whistle blows.

The safest call is probably the point guard who gets to feed Giannis around the basket — Jrue Holiday.

Giannis could always find some triple-double magic, but sticking with Holiday as the facilitator on the break and in Milwaukee’s halfcourt offense just feels right.

The answer? The three most likely assist leaders are Jrue Holiday (7.8 APG), D’Angelo Russell (5.8 APG), and Giannis Antetokounmpo (5.0 APG). Shop for their Moments in the Marketplace here.

Are the Bucks ECF favorites?

Khris Middleton, Pat Connaughton and Joe Ingles haven't played a game yet this season, and the Bucks remain the only unbeaten team in the league. This, simply put, is a team that knows what it is, and knows how to win.

There will be tweaks in the offensive and defensive philosophy – Milwaukee’s already allowing less shots from beyond the arc – of course, but this is a core with deep familiarity and chemistry, and championship pedigree.

Gobert’s defensive impact is undeniable – with him as the anchor, the Timberwolves currently hold the 9th-best defensive rating in the league so far, but… they’re also the 23rd-best offense.

Offensively, this partnership will take time. Spacing is key. Any instance in which KAT and Gobert are both fighting for positioning in the key, there’s a major clogging issue. Opposing teams will rip down and bring extra defenders, not worrying about the crosscourt vision from either big man.

If they run more actions where KAT can handle and shoot off high ball screens, while Gobert rolls hard to the rim or prepares down low for the offensive rebound, they’ll see more success over time. Still not convinced this group will be able to defend at a high level on the perimeter in the postseason.

The answer? Not sure!

Over the first 7 games of the season, Giannis is averaging 33.6 PTS, 12.7 REB & 5 AST per game, and is doing so in limited minutes. Only two other players in the league are averaging 30/5/5 – that’s Luka Dončić and Steph Curry.

Giannis, defensively, is holding opponents to 41.5% from the floor and currently holds the 7th-best defensive rating in the NBA. He’s playing out of his mind.

It’s not a matter of if Giannis will find himself recognized in the Top Shot 50 as one of the most important players of the season, but where he’ll rank when the dust settles.

Will Anthony Edwards get his first dunk of the season tonight?

Few players under 22 years old in the NBA have more promise and explosiveness than Anthony Edwards. He already has three 30-PT performances this season, but notably, has yet to dunk the ball once — a hard-to-believe stat for one of the most beloved and popular dunkers on NBA Top Shot.

Could he be more efficient as a scorer from the field? Of course! But, with consistent volume and more experience over an entire season, his shot-making will eventually level out.

The chatter – as Edwards explained, “Everybody be asking me to dunk the ball like it’s all peaches and cream,” – is a lot to do about nothing.

He’s currently settling for shots, but hasn’t lost his explosiveness. As long as the points stack up, it’s okay if they come without a highlight-reel slam — but when that highlight-reel slam comes, it may become Ant’s Legendary Moment in the Top Shot 50, if his impact on the court secures him a spot amongst the 50 players recognized.

Tonight, chances are Brook Lopez and Giannis will protect the rim defiantly, as they always do.

The answer? Probably not, but that’s okay.

On December 10, collectors will join NBA Top Shot for The Tour in Portland — and watching Ant Edwards do his thing against Dame Lillard will be part of the festivities.

After a 3-1 start, the Knicks have lost their last 3 games, all against Eastern Conference opponents with winning records. They now face Philadelphia, led by Tyrese Maxey, who’s stepped up in Joel Embiid’s absence in the previous two games vs. Washington.

Over those two games against the Wizards, Maxey scored a combined 60 PTS.

Jalen Brunson brings stability at point guard that the Knicks have been searching for over the past few decades, and he currently leads the team in scoring and assists.

New York’s long-term success hinges on more involvement from youth on the roster, though. Immanuel Quickley (23.3 MPG), Cam Reddish (18.3 MPG) and Obi Toppin (16.0 MPG) will need to make the most of their limited opportunities.

Chicago’s still waiting for Patrick Williams to take a leap on the offensive end, but at least they’ll have his length and Caruso’s defensive prowess to combat Tatum and Brown on the wing, one of the most devastating duos in the league. Tatum has turned into a legitimate MVP candidate, scoring 30.1 PPG to start the year.

The Bulls’ trio of DeMar DeRozan, Zach LaVine and Nikola Vučević averages a combined 60.4 PPG, and sophomore Ayo Dosunmu has thrived in an increased role.

The Celtics are coming off a tough overtime loss to the Cavaliers (their 2nd OT loss to Cleveland this season), and already fell to Chicago this season on the road on October 24.

Have the Lakers finally found a happy medium with Russell Westbrook coming off the bench?

He seems to be buying in as of late, and could turn into a 6th Man of the Year candidate if he continues playing at this level. As a reserve, Westbrook’s averaging 16.3 PPG, 6.7 APG, 7.7 RPG and 46.2% from the field. Anthony Davis, who’s battled through lower back tightness since Day 1 of 2022-23, has looked like a defensive force when he’s on the floor.

Apparently Utah’s blend of veterans didn’t get the rebuilding-mode message. Here are the teams the Jazz have defeated so far this season: Nuggets, Timberwolves, Pelicans, Rockets and Grizzlies (x2).

It’s nice to have Zion Williamson back, isn’t it?

Time after time, he seems to get to his dominant left hand in the lane. He’s a matchup nightmare with just as much – if not more – bounce than years past. Since returning from a hip contusion, Williamson has averaged 24 PTS, 8.5 REB & 7 AST.

On Atlanta’s end, Dejounte Murray is coming into his own within his new role alongside Trae Young.

Against the Knicks on November 2, Murray scored a career-high 36 PTS, 9 AST and 6 STL – becoming the first player in franchise history to reach at least 35 PTS and 5 STL since Dominique Wilkins.

Surprisingly, these are the two top teams in the Western Conference.

With Damian Lillard sidelined, the Trail Blazers look to improve on their hot start.

Anfernee Simons has back-to-back games with 30+ PTS and put together one of the hottest quarter runs in recent NBA history this season. On October 24 in the 3rd quarter vs. the Nuggets, Simons scored 22 points, including 6 3-pointers in 6 minutes.

Shaedon Sharpe, Portland’s No. 7 overall pick in the Draft, has been a welcomed addition. He’s been thrust into a steady backcourt role while the team waits for Gary Payton II to return to action.

With the Suns, we know what they’re capable of. This is a team that just last season, recorded 64 wins, the most victories in a single season since the ‘17-18 Houston Rockets (65).

Devin Booker is an All-NBA talent.

Mikal Bridges is an elite defender.

Deandre Ayton is an imposing center.

Cam Johnson is an improving wing.

There are no more excuses for Phoenix – the clock’s ticking.

Ja Morant does something special every night.

That alone is enough to tune-in to this matchup. Desmond Bane has been a more-than-reliable shooter to complement Morant’s aggressive attack. In Bane’s last 4 games, he’s shooting 22-for-36 from 3.

The Wizards are .500 with two players scoring 20+ PPG – Bradley Beal and Kristaps Porzingis. With Rui Hachimura making more and more of an impact, look out for Washington to surprise in the East.

Enjoy the weekend of hoops and playing along with the new Challenge!