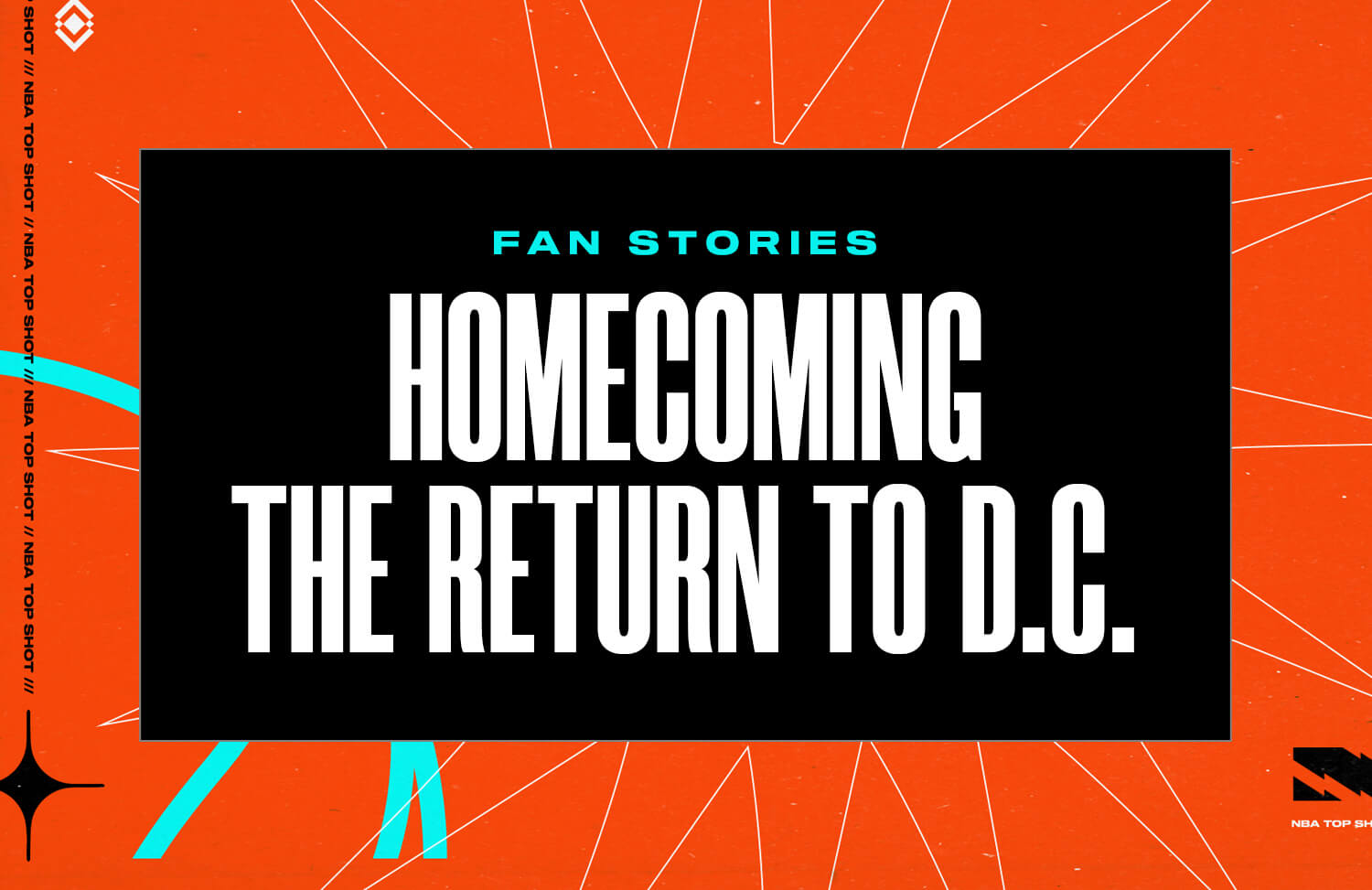 ‍Saturday evening was a big night for Washington Wizards fans as they had the return of their 2010 No. 1 draft pick, John Wall. Due to missing the entire 2019-20 season and getting traded in the midst of the pandemic, Wall hasn’t played in front of Wizards fans for years. ‍

Wall’s homecoming, which has been years in the making, created a special buzz around D.C. for a can't-miss matchup between the Wizards and Clippers.

Thanks to the Wizards Fan Community and Team Captains, Collector joeswam was able to get up-close-and-personal with all of the action.

“My Top Shot fandom began as a desire to find something my son and I could connect over during early 2021” said joeswam, who I spoke with the day after the game. “He mentioned Top Shot and I thought I would be the "hip dad" by getting involved in what I thought of as the modern version of card collecting. I started with the idea that collecting would help me to connect with my son, but I quickly saw that it would also help me to connect with other Wizards fans.”

Although it was a Wizards home game, fans couldn’t help but cheer for Wall as one of their own.

With Reggie Jackson out, Wall had his first start of the season, which was accompanied by a standing ovation.

“From the moment I got to my seat, it was obvious the crowd was energized for John Walls' return to D.C.,” joeswam said. “Fans really connected with Wall because of his passion on the court and his philanthropy in the city…which continues to this day.”

I’m exceptionally grateful for the opportunity to witness John Wall’s return in person. Amazing energy in Cap One tonight.

Wall, who was amped up by the crowd, had an impressive play where he stole the ball then sunk a jumper, prompting a timeout.

“There was a moment during the game when the Wizards called a timeout after a made shot by Wall. He turned to the crowd and shouted ‘This is still my city’ several times,” joeswam said. “We were sitting close enough that we were able to hear him. The fans all got out of their seats and cheered. It was intense.”

The Wizards, who had double-digit leads multiple times in the first half, weren’t able to keep up that momentum in the second half, ultimately falling short, allowing the Clippers to take the 114-107 win. Wall finished with 13 points in 29 minutes. The homecoming wasn’t what Wizards fans would have hoped for, but Wall is someone that can leave a positive impression on Wizards fans regardless of what logo is on his jersey or what the scoreboard says at the end of the game.

“On Saturday night, the crowd was as intense and energized as I'd seen them in person. They weren't cheering for the Clippers, however. They overwhelmingly wanted the Wizards to win,” joeswam said. “They just still feel very much like John Wall is a Wizard, so he got as much of their support and adoration as anyone. It was so interesting to see that play out in person.”

Those one-of-a-kind experiences are exactly what ajlax711 envisioned when becoming one of the Co-Captains for the Wizards Fan Community.

“When I signed up to be a Team Captain, the first thing I wanted to do was help activate IRL experiences on the local level,” ajlax711 said. “I have always seen Top Shot as the Future of Fandom, and having the opportunity to get real life experiences from collecting digital Wizards Moments is a groundbreaking innovation.”

Since the Fan Communities Program kicked off in June, the Team Captains representing these communities have sent a collector from Lithuania to the NBA Draft for a VIP experience, hosted a local draft party in D.C., sent two collectors to Vegas for NBA Summer League, had a group outing in a suite at a Mystics game, a home opener event for 40 collectors that included a large pregame and postgame event, and finally the upcoming holiday event.

“One of the best parts about being a Captain is the support and appreciation from all of the Wizards and Top Shot fans I have interacted with. You can tell how much people appreciate all the work we are putting in to make sure that our micro Wizards community feels appreciated and rewarded for their fandom,” ajlax711 said. “We are building this from the ground up and while challenging, I am looking forward to further building out the foundation of the core community for Wizards fans and continuing to grow our group.”

For more information on the Wizards Fan Community, check them out here. To start your NBA Top Shot collection and get closer to the game and team you love, create a free account.

Interested in learning more about Fan Communities on Top Shot? Here is everything you need to know.