Which Top 100 Moments Are In Starter Packs? 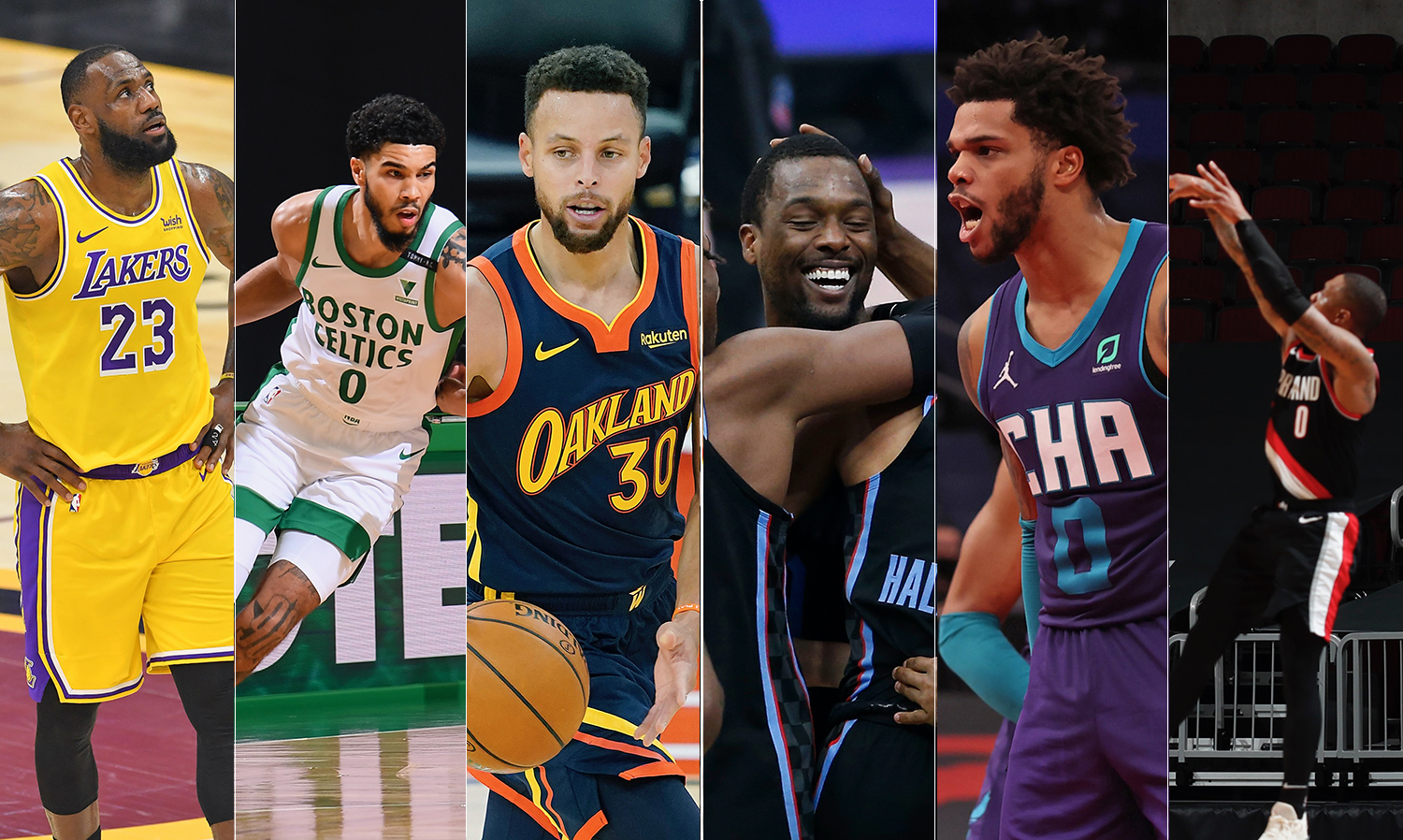 Check out all of the plays in the NBA's Top 100 that can be found on Top Shot at the links below.

What better way to start your NBA Top Shot collection than with some of the greatest plays from the 2020-2021 season?

Book Puts The Defender On Skates.

Book's been beloved by hoop heads for years. But the world woke up to him in the 2021 NBA Playoffs, as he played the role of superstar for the Suns in their Finals run.

Your favorite player’s favorite player does work with the ball in his hands. Phoenix Suns guard Devin Booker flexes his next-level handle to create space from two-time Defensive Player of the Year Rudy Gobert, then buries a step-back jump shot in an April 30, 2021 win over the Utah Jazz.‍

Varo! (Finnish for Watch Out)

Challenge him at the rim all you want but don’t be surprised if Lauri Markkanen tries to go right over you. The Chicago Bulls forward (who signed with the Cleveland Cavaliers in the offseason) drives directly into the paint and plants one on the Oklahoma City Thunder in a March 16, 2021 victory.

When the game is on the line, find your sharpshooter. Atlanta Hawks wing Tony Snell sidesteps into position behind the three-point line then catches a clutch feed from teammate Trae Young and buries a game-winning triple against the Toronto Raptors on March 11, 2021.‍

There are few better ways to ingratiate oneself to a new team than icing a game-winner less than two weeks after joining the roster. Toronto Raptors trade acquisition Gary Trent Jr. sprints up the floor in the final seconds of a game against the Washington Wizards then rises up to bury a go-ahead triple as the buzzer sounds on April 5, 2021.

Devin - ice in the veins - Booker

Known for not backing down from big time moments, Devin Booker steps into a three as time dwindles and secures the win for Phoenix with an unbelievable game-winner.

Garland makes a pass that can only be described as heat seeking. He threads the ball through the entire defense and gets it to Collin Sexton in stride who has the easy finish at the rim.

The Dunk That Could Power A City

LaMelo Ball finds Miles Bridges on the fast break with a beautiful behind the back pass. Bridges takes two steps and unleashes a gorgeous windmill dunk to finish off the fast break.

The Bank Is Open

Tatum vs. Giannis. Game on the line. Tatum takes a few dribbles...steps back...off the glass...and it’s good! The Celtics defeated the Bucks on this incredible shot from one of the best young scorers in the league.

Some players have it...some players don’t. Cole Anthony absolutely has the clutch gene. Anthony races down the court and heaves up an off-balance three to take down the Timberwolves at the buzzer! This was not his only game-winning shot of the season.

Clarkson loses his defender with a pretty spin move. The spin move had so much rotation that he faked himself out but still drained the off-balance shot to complete a wild play.

This is one of the most impressive behind-the-back passes you will ever see. From beyond the three-point line, Murray somehow gets the rock past a defender and into a cutting Nikola Jokić for the easy layup. The pinpoint accuracy is outstanding.

A Stroll Through The Lane

Curry is known for superior handles which are on full display in this mind-blowing Moment. Curry basically takes on the entire Spurs defense and they never had a chance as no defender gets anywhere close to him. He drives down the lane and finishes with ease.

He’s Still Got It

Approaching a decade in the NBA...and still not 30 years old...Harrison Barnes continues to show that he can still play at a high level. Barnes catches the full court pass and turns and fires over the Cavs defenders to hit a game-winning shot at the buzzer.

We are used to seeing LeBron James chase down blocks...he’s one of the best in the game. Here he was like a predator waiting for his prey. As Sexton went up for the layup, James decided to swat the ball so hard it went out of bounds at mid-court. Another spectacular play from King James.

There Goes That Man Again

This isn’t the first time we’ve seen Miles Bridges on this list. We have a feeling that Bridges will be adding a whole lot more highlight dunks this upcoming season. There is no defender that scares him.

Damian Lillard knows better than anyone how to end a game in-style. The Portland Trail Blazers superstar adds yet another game winner to his portfolio, collecting the ball after a late-game jump then burying a go-ahead triple over the Chicago Bulls as time expires on January 30, 2021.