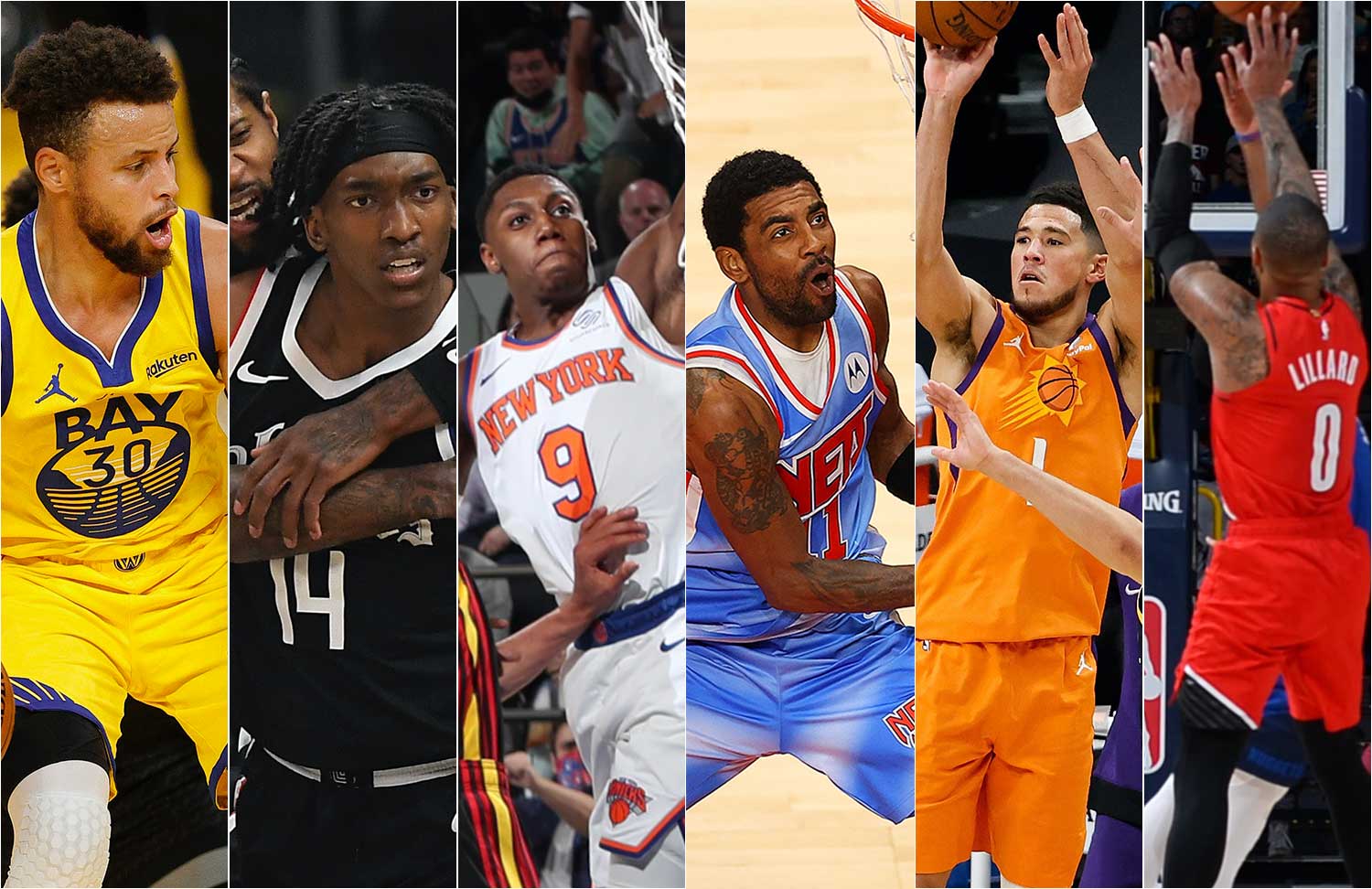 All of the best buzzer-beaters, dimes, crossovers and MORE 🔥

Keep reading for the Moments you can find from 100-81, and stay tuned for a new batch on Monday.

A Legendary Buzzer-Beater From A Rising Star.
‍
‍
Some hoopers are just destined for the spotlight. Orlando Magic rookie Cole Anthony works to create space against his defender in the final seconds of a game against the Memphis Grizzlies, then finds just enough daylight to pull up on Kyle Anderson and drain a go-ahead hoop on May 1, 2021. The 20-year-old put up 26 points, eight rebounds and six assists in the W.‍

No-Look, Behind The Back Magic From Chef Curry.

After spending most of the past decade reinventing the way the game was played, making runs deep into the postseason and all-around dominating the NBA, the Warriors had a tough road in 2020-21. Saddled by injuries, they struggled to keep pace in the Playoff race .

Which made it easy to forget that Steph Curry just had one of the best seasons of his life -- in a year in which he was often the point of focus for entire defenses. Watch the way that Curry draws the whole defense to him, even getting a defender up in the air, before dishing the perfect no-look, behind-the-back dime for the bucket.

The Detroit Pistons center corrals a pass from teammate Jerami Grant then immediately hits his charging Brooklyn Nets defender with a subtle one-handed pass fake before re-collecting the rock and taking it hard to the rim on March 26, 2021.

One Of The Best Moments From One Of The Greatest Postseason Performance Ever. Ever-ever.

You know what time it is when that clock ticks down in the postseason. Portland Trail Blazers star Damian Lillard pushes the rock up the court in the final seconds of an already mesmerizing overtime performance, moves to take his defender off the dribble, then spins back out to the three-point line to force a second extra frame. Lillard put his fingerprints all over the history books in Game 5 of his squad’s Round 1 battle with the Denver Nuggets, finishing with a practically mythical 55 points, 10 dimes and a record-setting 12 three-pointers in the June 1, 2021 contest.‍

Book Puts The Defender On Skates.

Book's been beloved by hoop heads for years. But the world woke up to him in the 2021 NBA Playoffs, as he played the role of superstar for the Suns in their Finals run.

Your favorite player’s favorite player does work with the ball in his hands. Phoenix Suns guard Devin Booker flexes his next-level handle to create space from two-time Defensive Player of the Year Rudy Gobert, then buries a step-back jump shot in an April 30, 2021 win over the Utah Jazz.‍

Keeping the theme going, if Book's stardom was a liiiittle under the radar until this year ... Terance Mann's name was almost completely off of it.

But when Kawhi Leonard suffered an injury in the Conference Semis, Mann -- who'd been playing about 5 minutes a night -- went off.

In two straight games, Mann became the sparkplug for the Clippers, including two huge slams over the reigning DPOY. A little asterisk here. The #92 individual Play on the NBA list came from Game 5, while the Moment in Top Shot came 1 game later in Mann's hero arc ... in what became known as The Terance Mann Game (which basically broke Twitter). This Moment sees Mann track a teammate’s missed field goal, then leap up to throw down a putback slam on Utah Jazz center Rudy Gobert. Mann finished the matchup with 39 points on 15-of-21 shooting as his squad closed out their series in Game 6 of the Western Conference Semifinals.

Varo! (Finnish for Watch Out)

Challenge him at the rim all you want but don’t be surprised if Lauri Markkanen tries to go right over you. The Chicago Bulls forward (who signed with the Cleveland Cavaliers in the offseason) drives directly into the paint and plants one on the Oklahoma City Thunder in a March 16, 2021 victory.

Irving's a magician. One of the most talented finishers in league history, he's also a popular choice for Best Handles in the League, too.

Here, you see him at his absolute best, by ducking under his defender and spinning in the IMPOSSIBLE reverse high off the glass.

Throw it down hard enough and you take the defense right out of the equation. New York Knicks wing RJ Barrett pushes the ball up the floor then reaches way back to punctuate the possession with an extended one-handed tomahawk in Game 1 of his team’s Round 1 matchup against the Atlanta Hawks on May 23, 2021.‍

When the game is on the line, find your sharpshooter. Atlanta Hawks wing Tony Snell sidesteps into position behind the three-point line then catches a clutch feed from teammate Trae Young and buries a game-winning triple against the Toronto Raptors on March 11, 2021.‍

There are few better ways to ingratiate oneself to a new team than icing a game-winner less than two weeks after joining the roster. Toronto Raptors trade acquisition Gary Trent Jr. sprints up the floor in the final seconds of a game against the Washington Wizards then rises up to bury a go-ahead triple as the buzzer sounds on April 5, 2021.

Come back Monday for more, and in the meantime...